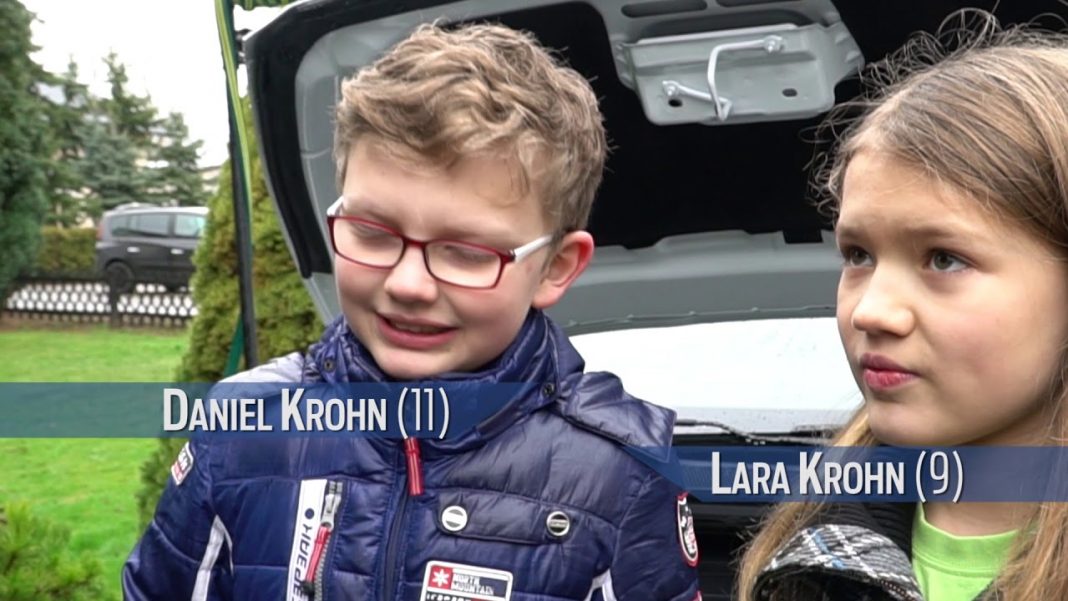 It’s an idea that could one day help save billions of litres of water. * Instead of simply wiping raindrops off our car windscreens, why not collect and reuse the water via the washer jets?

Brother and Sister Daniel and Lara Krohn were travelling in the family car last summer when the heavens opened. But when their dad Gerd, who was driving, tried to clear away the smears, the reservoir was empty – and the windscreen just got dirtier and dirtier.

The two clever kids’ idea to capture the raindrops and reuse them won first prize in a local science competition and has now been developed for a full-sized test car.

“It was a downpour. There was water everywhere – except in the windscreen wiper reservoir. My sister and I thought this was really funny and then the answer suddenly seemed obvious. Simply reuse the rainwater,” said 11-year-old Daniel, from Jülich, in Germany.

“We couldn’t believe that no-one had thought of it before,” added 9-year-old Lara. “To try it out, we took apart our toy fire engine and fixed the pump to a model car inside an aquarium. Then we added a filtering system to ensure the water was clean. It just worked really well.”

Engineers at Ford who heard about the idea were so intrigued that they offered to install a full sized device into a Ford S-MAX test car. To collect the water, rubber pipes connected the bottom of the windscreen to the reservoir.

“Daniel and Lara’s idea has been staring drivers in the face for decades – and it has taken one moment of ingenuity to bring it to life. In less than five minutes of rainfall the washer reservoir is completely full,” said Theo Geuecke, supervisor, Body Exterior Hardware, Ford of Europe.

Water usage by vehicles is expected to increase as additional cameras and sensors also need to be kept clean. Ford engineers are already working on ways to capture water, via rain and condensation, including a way of gathering moisture from the air and filtering it into drinking water – On the-Go H20.

“What a brilliant idea! Innovations like these are essential to make the water we have go further. We will all need to change our behaviour to waste less water, but we’ll also need clever new bits of kit like the one Daniel and Lara have designed,” said Nicci Russell, managing director, Waterwise.

* Drivers use around 20 litres each year to keep their windscreens clean. With 291 million cars on European roads, if such a “Krohn” system were in every car, it would save almost six billion litres of water each year.