Those of us who were living on the Orihuela Costa at the time will remember it well; a murder that shocked the entire neighbourhood.

April 2, 2004, we were all in deep shock following the tragic death of 13-year-old Shila Bigdely, a young Norwegian girl who was resident in Playa Flamenca. She was raped and murdered by Tobias, a high school classmate as she ran to catch her school bus on Calle Nicolas de Bussi.

A friend of Shila’s family found the body in the ravine that runs along the back of market street 24hrs after she was first reported missing and the police caught the killer in a matter of days. There was strong DNA evidence and he was duly convicted.

However a state of horror continued to hang over the community as the sentence was eventually passed. Tobias was sentenced to just four years in a detention centre. He is now said to be living a pleasant life on Majorca: driving, drinking in the local bars, dancing in the local discos, sharing meals with his girlfriend.

We went to memorial services and protest marches over the short sentence given to Tobias. There were lots of them and they went on for some considerable time.

For those of us at the Leader Newspaper the memories are particularly significant because the murder occurred in the week that we launched and Edition One carried the story in graphic detail. 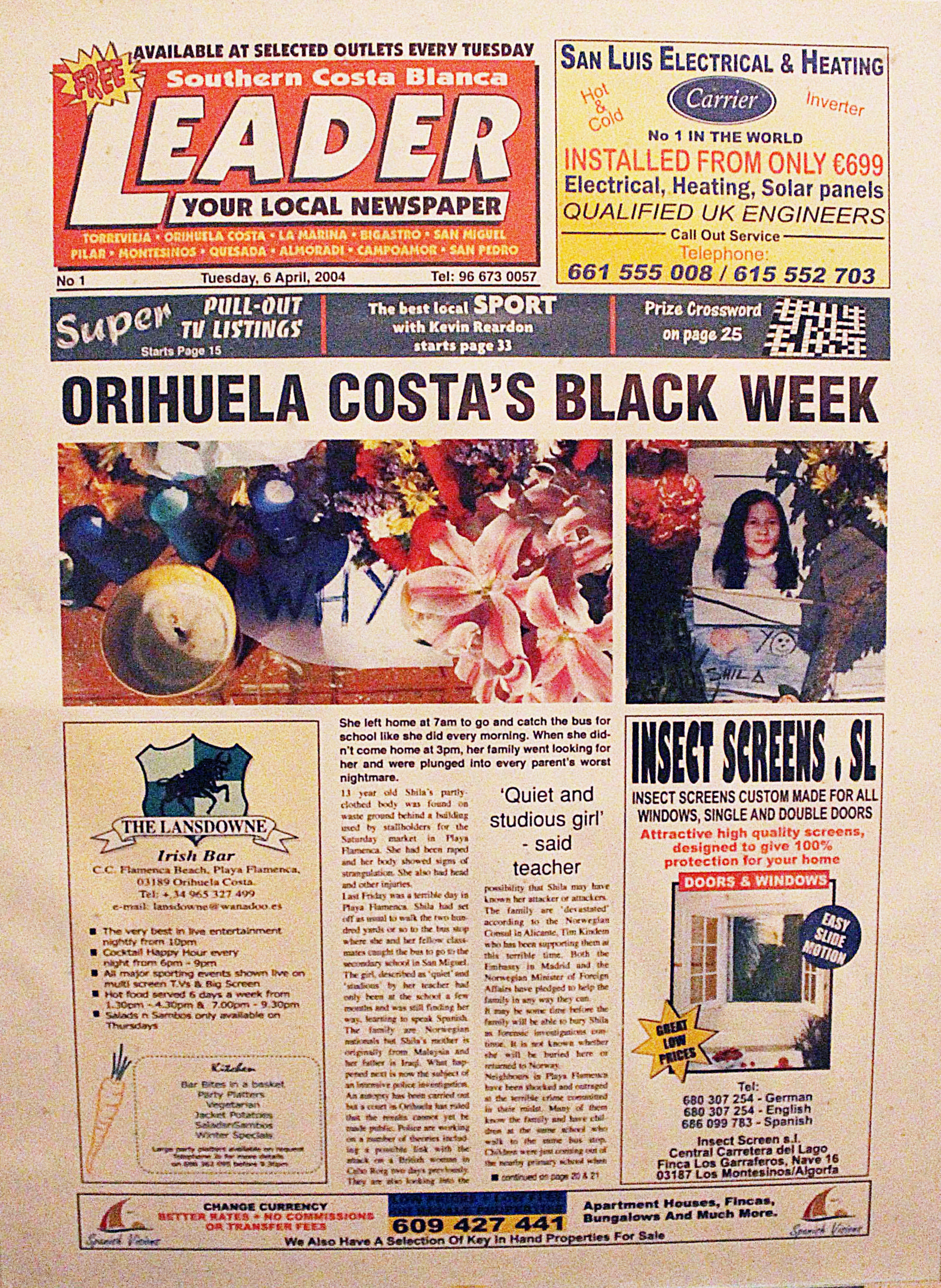 Just a month after the tragic event the town hall built a park at the corner of the ravine and named it after Shila. It is still in use today, although newcomers are mostly unaware today of its tragic origins. Until just last week the only reminder was a large memorial cross that was erected in the young girl’s remembrance.

The memorial, a metre and a half tall, bore a photograph of the murdered girl and following complaints from local resident, at least according to the deputy mayor and councillor for infrastructure, Juan Ignacio López-Bas, has ordered it to be removed.

The councillor said that residents have been calling for the removal of the memorial for years as they consider that such a construction, described as being similar to a tombstone, is not appropriate for a children’s play area.

“Mothers and fathers of children who regularly play in the park have requested the removal of the symbol because it feels as though they are playing in a cemetery,” he said.

But the decision does not bear well with everyone. Some residents of Playa Flamenca have criticised the removal of the memory through a Facebook group. “They have taken away a bit of our history. Without consulting us. It is a lack of respect to us all but particularly to women and to the residents of Orihuela Costa, “said one of the Facebook messages.

Another post called the councillor’s decision shameful saying “It was a gender violence murder for which our councillors regularly hold a minute’s. Every time a woman is murdered by her partner they all spill out onto the steps of the Ayuntamiento condemning violence to women, so why now have the taken the decision to dismantle the memorial that was erected in Shila’s memory”?

López-Bas said that he tried unsuccessfully to contact the family to explain to them what was being done. Many residents question the fact that he actually tried. 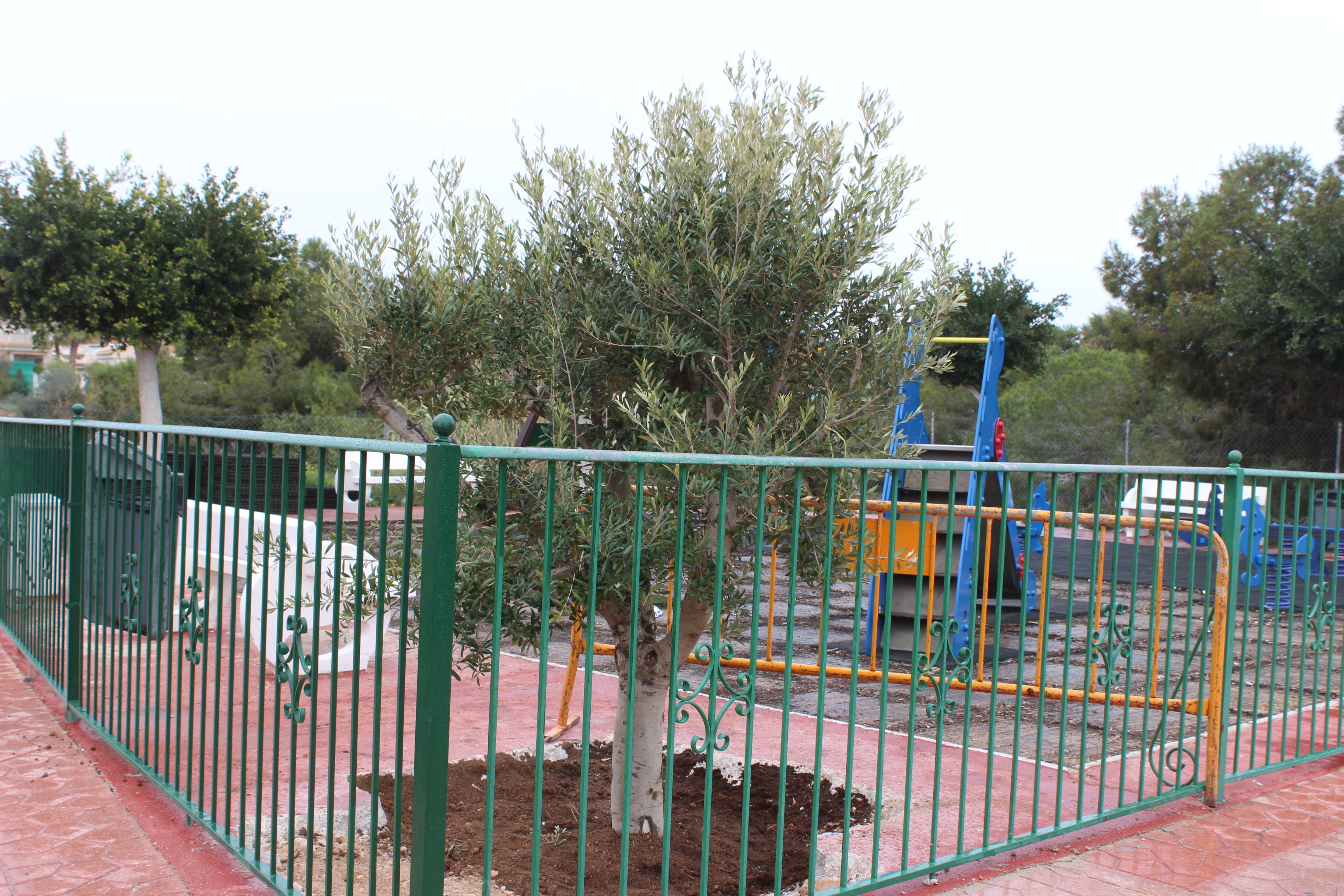 He said that he wanted to make it clear that the park will retain Shila’s name and a memorial to the young girl will continue to feature prominently in the park. “It will simply be something a little more appropriate” the councillor continued, “an olive tree with a simple plaque dedicated to her memory. That way we will continue to show the respect that Shila and her family deserve.”

Meanwhile, as we approach the 14th anniversary of Shila’s murder there is now an Olive Tree in oplñace. However there is nothing to indicate that it has been planted in Shila0s memory.