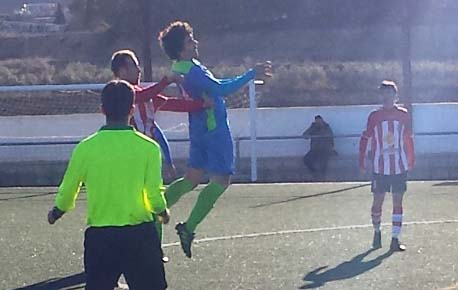 In front of a crowd of only 85 including 50 travelling Monte fans despite the bitterly cold wind, Hondón kicked off playing on a narrow small pitch with a strong wind behind them. Immediately Maccan took the ball forward to almost score from the kick-off. The Hondón goalie sent the ball to the Monte’s half which resulted in 2 corners in a matter of seconds.

However after 10 minutes it was Monte who took the lead when a free-kick was played into the box and the knock-on was headed in at the near post by Manu. Ten minutes later Vaz playing with his left knee heavily strapped up missed a good chance one-on-one with the Hondón goalie, to double the score.

Hondón playing long balls into our penalty area saw Dani make two excellent saves, the second twisting to stop a deflection. On 36 minutes Monte broke away with 4 players facing 1 defender who hauled Maccan down with a rugby tackle just inside their half. To the amazement of everybody only a yellow card was issued for such a blatant goal-scoring opportunity.

Dani was called upon to make another 2 good saves, a one-on-one and a long range effort which he tipped over the bar. In between these 2 saves Monte doubled their lead when from another free-kick the ball was headed down to the feet of Fran who placed the ball into the corner wide of the keeper

The second half started like the first with several free-kicks but now the Hondón players started picking up yellow cards, both for fouls, and obvious insults of/to the referee!!.

Now kicking against the wind Hondón found it difficult to use their long ball tactic. 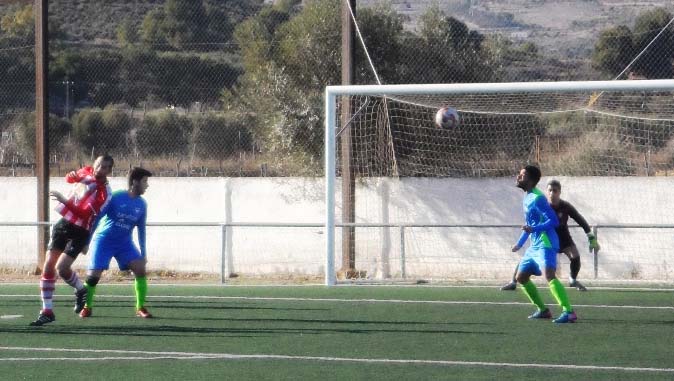 On 65 minutes their goalkeeper cleared a free-kick taken by Luis, only for the ball to go to Maccan, who forced a second save that fell to Vaz who tapped the ball into an empty net. At 3-0 Vaz was taken off clearly limping and was replaced by new signing Patri who immediately broke away, ran down the left wing with the ball, and calmly placed the ball past an advancing goalkeeper to make it 4-0.

With 20 minutes left Monte made a triple substitution with Manu, Sanchez and Maccan making way for Koko, Dani and German. Following a superb save from the Hondón goalie after a free-kick, Monte had only their 2nd corner of the match. And with almost the last kick of the game Patri received a short pass from the corner, and from near the right edge of the field curled the ball in what seemed an impossible angle into the top corner giving the goalkeeper no chance.

Overall an entertaining and exciting game. The Hondón players continued to push forward throughout the game, to claw back a goal, but the Monte defence stayed fast and disciplined, with the help, of our goalie Dani. Hondón had at least 10 corners, showing that most of the action was in the Monte half of the field. It didn’t help Hondon’s cause by putting 3 players around leading scorer Vaz, and therefore ignoring the likes of Luis, Manu, and Maccan, who just tore the Hondón defence apart.

What on paper looked a tricky fixture turned into a rout. The whole team played well, and now we can look forward to next week’s home game against C.F. Rafal, this takes place at 5.00pm on Sunday 11th February 2018.

For more information re’ CD Montesinos, keep an eye on the Monte Facebook page.

Icelandic Man dies in Torrevieja after being stabbed by his stepson