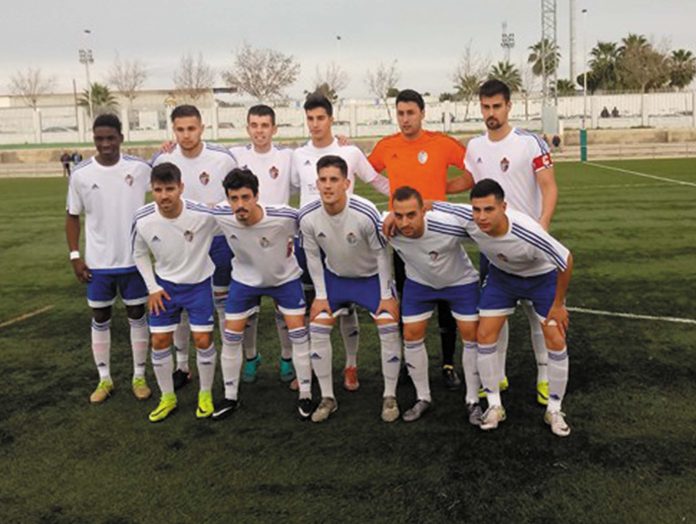 At a meeting held last week inside the Torry Army hut, a group of young Torrevieja based businessmen met with anxious Torry fans.  The new consortium explained that they planned to meet President Vicente Boix later that day, hoping to officially take over the running of the club.

Although the meeting did take place, some days later nothing seems to have materialised, and neither have any of the questions put to the consortium been answered.  Fans wanted to know about the intended budget, the retention of manager Pedreño, as well as the refurbishment of the eyesore that is the Nelson Mandela grandstand.

I wish I could answer the questions, but at the moment I’ve more chance of finding out what’s going on in North Korea, than getting a media update from our local senior football club.  Although all of the parties involved were at Sunday evening’s game there was nothing forthcoming. It seemed to be business as usual, certainly for the time being, both on and off the pitch

More of that later, but to the game itself where Torry hosted local rivals Orihuela ‘B’, who they beat 1-0 at the end of September last year.

Subsequently, things have gone a bit pear shaped for the hosts, especially in front of goal, where they are in danger of getting a nose bleed every time they cross the half way line!  New signing Calderón was set to make his home debut, having last week featured in the defeat at University of Alicante.  Unfortunately, with giant centre back Verdu having been released by the club, the excellent partnership he had formed with Zaragoza, is now no more.

Lopez Herrero was the match referee, an individual who is not thought too highly of at Torrevieja but from his opening whistle Torry nevertheless took the game to their visitors. With virtually the first attack of the match they were in front as Baltrán took advantage of a defensive lapse to steer the ball home from close range.

The Torry centre forward could have doubled his account just seconds later but he could only lift his effort over the bar when well placed to score.

Manu in the Torry sticks was having a quiet half but when called on to make a save from Vitolo on the half hour he was sharply down and equal to the forward’s strike.

New arrival Calderón was upended on the edge of the Orihuela box moments later for what was as clear a foul as referee Lopez Herrero is ever likely to see, but his casual dismissal came as no surprise to those Torry fans who have seen him handle Torrevejense games before.

Neither did his sending off on 35 minutes of Torry forward Pablo Coria for what was no more than a routine foul, but when manager Pedreño was made to follow him to the stands as he protested the referee’s decision, the game showed every indication of becoming a nonsense.

With the interval looming Lizón could have punished the home side but he sliced his effort from close range across the open goal but with the last action of the half Walid was unfortunate to head into his own goal as he mistimed his clearance at an Orihuela corner.

Torry began the second period on the front foot with good efforts from Beltrán and Vicente but as the numbers began to tell and the legs began to tire Orihuela’s domination became ever more strong.

The home side did well to keep their visitors at bay until the 75th minute and were only beaten with an absolute beauty from Vitolo. The forward his a screamer from fully 35 yards which was still rising as it thundered into the back of Manu’s net.

The final entry of the game on Torry’s Twitter feed said “The bad luck continues although the team gave it their all”. Just about sums it up for me!

Next week Torry travel to Elche Ilicitana who in recent weeks have been playing their home fixtures on Saturday. Check the Torry website however for details.

Historical Habanera brought to a close in Torrevieja

Moncayo market, Guardamar, back in swing