The annual solidarity calendar, produced by Andy Ormiston, is once again being given free to over 30 groups and associations who can sell them on for their own charities funds, thus spreading a little light and happiness. It is free thanks to the generosity of the six companies who are paying for the graphics and printing of the calendar – ArocaSeiquer Abogados, Alamo Costa Blanca, Cambridge Currency, MAPFRE Brithol Insurance, Atlas Seguros brokers and Currency Direct. 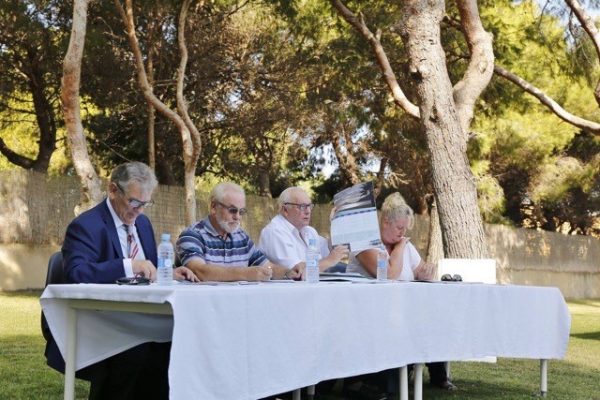 The presentation was held in the lovely gardens of the main offices of ArocaSeiquer Abogados in Rojajuna. In his presentation Andy paid tribute to the volunteers representing so many other people who freely give of their time and experience for the benefit of others. The calendar is meant as a dedication to all the volunteers and professionals who help make the Costa Blanca a better place in which to live. The calendar is a tool by which they can reach out to others and perhaps involve them in the different tasks of so many associations. He stressed how their voluntary work is paramount as it fills a void in public services, reaching out to the most vulnerable in our society, whether healthy or homeless, the sick and dying, the lonely and so often forgotten victims of our society.

Every year the solidarity calendar has a theme and this 13th edition is dedicated to the Costa Blanca with information about the place in which we live. Carlos Garcia has been a mountain of strength, laying out the graphics and doctoring the colouring so that we have a calendar that is a delightful piece of art on the walls of our homes. Once again Andy said that he was indebted to the generosity of photographers who have donated their skills and photos – Phil Fryer, Antonio Garcia, Joaquin Carrion, Nicholas Garcia and John Rook. 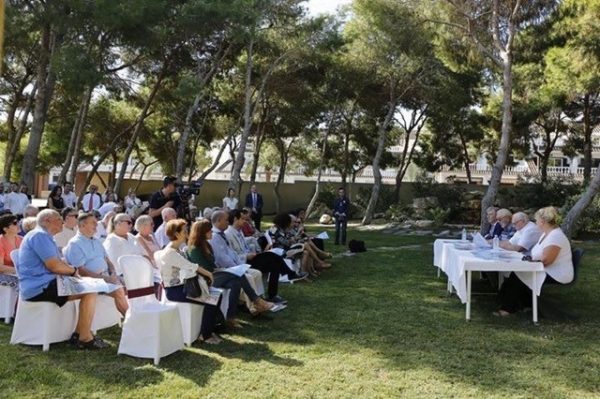 There are 138 towns in the Costa Blanca so the decision was that rather than just photos of coastal places with sea and sand, they have looked inland with the variety of agricultural towns, mountain places and included the only habitable island here – Tabarca.

Present was Eduardo Dolon Vice-President of the Alicante Diputacion and responsible for tourism on the Costa Blanca, who at the end commended Andy on providing such a lovely piece of propaganda for the Costa Blanca tourism. Without tourism the Costa Blanca would not be such a prosperous area. The cover photo is of Calpe and its famous rock of Penyal d’Ilfac, followed by two information pages containing a short report outlining some of the advantages of being here. These have smaller photos of places, sports and things to do and visit – including sea sports, inland rambling, mountaineering, golf, fortress routes with Villena, the contrast of the beaches of Finestrat and the dunes of Guardamar del Segura, the colourful houses of Villajoyosa and the lovely blue rooftops in Altea.

The January photo shows Calpe with the intention of demonstrating that the sky is a beautiful place as well, and each month’s photo has a couple of lines about each place. It is a well printed, colourful A3, 16-page calendar and as always there is a date box with notes of special fiestas, bank holidays in Spain, UK and Ireland, as well as the full moon and other astronomical information, not forgetting main public holidays in Spain, U.K. and Ireland. There is space for writing appointments and notes. Then underneath in each month, notes of some of the fiestas that may be of interest. This is rather limited as every town has fiestas of some sort or other. Andy apologies to anyone who feels missed out.

At the bottom of the page there is a small dedication to the sponsors who support the calendar. The photos of each month picture aspects of Benidorm, Alicante, Villajoisa, Moraira, Tabarca Island, Elche, Novelda, Pilar de la Horadada, Callosa d’Sarria, Guadalest and Torrevieja. The back page is a kaleidoscope dedicated to culture.

As in previous years MiguelAngel Aroca, in conjunction with Currency Direct and Cambridge Exchange, used commissions obtained from transfers by clients, had cheques made out for charities and this year 20,600 euros was shared between five organisations of the Vega Baja. So each one received a cheque of 4,120 euros that went to ALPE the comarca training school for the disabled; 22q which is an association that supports those with rare diseases especially children; The Stroke Support association based in Benijofar; the San Jose orphanage in Orihuela and the Help Vega Baja association.

At the end of the day the main sponsors ArocaSeiquer provided refreshments with Andres, the champion Serrano jamon cutter, offering paper-thin slices of a beautiful ham.