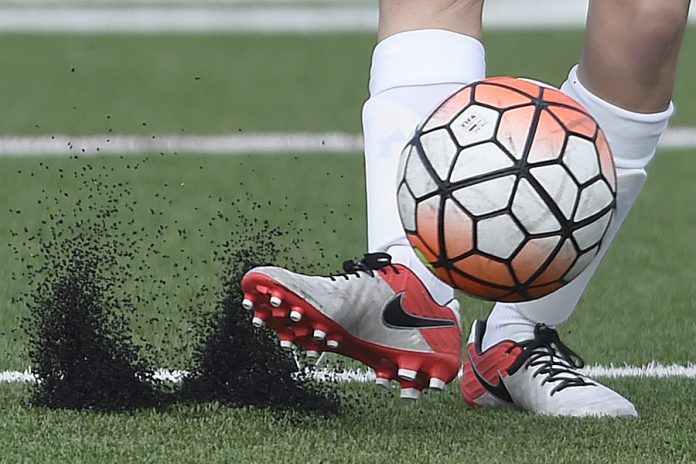 In front of just over 200 fans Monte recorded their first win of the season. However nothing comes easy and when Vaz gave the ball away Hondon broke away and in a crowded area we gave away a penalty after just 3 minutes.

Monte started to push forward and after 12 minutes Vaz made it 1-1 following a delightful pass from Maccan, Vaz booted the ball into the top right hand corner of the goal, a well taken goal. 2 minutes later Vaz went just wide after a one on one with the goalie, and with the home side pushing forward a long ball out of the Hondon half saw us go 2-1 down when we failed to clear what was in fact just a hopeful punt by the Hondon defence, Monte’s defence was completely lacking.

Things then got worse when on 17 minutes the visitors were awarded a second unfair penalty, this time for hand ball, when our defender was merely in the way of a fierce shot across the goal area. The situation looked as dark as the clouds gathering over the ground, but Dani to his credit guessed right and made a very good save. On 25 minutes, Vaz played a lovely through ball to Carlos Ventura to square the game at 2-2.

Vaz was now running Hondon ragged and after just 2 minutes we were in front when Vaz latched onto a through ball before lashing it into the net. Monte had 2 more chances but were happy to go in at half time leading 3-2.

The second half quietly until after 55 minutes Maccan made the visiting goalkeeper make a great save, the Hondon keeper was in fact playing well. On the hour Monte brought on Luis for Bachir and within a minute Vaz was getting his hat trick from the spot when hand-ball was given against the visitors. Again Vaz caused trouble in the Hondon goal area, and was brought down by their goalie for a clear penalty which was denied by the ref’.

German then came on for Dani Perez. Then the visiting forward number 20, who was their best player, got himself sent off. After Hondon’s number 20 kicked out at a Monte player whilst on the ground, then after a minor brawl, things went quiet and Monte made a double substitution with Coco and Dario replacing Alex and Maccan but player 20 would not let it rest and straight away went in studs up. After getting a red card it took 5 players and management to drag him off, and even then he wanted to fight all the way back to the dressing room.

Man of the match Vaz hit the post and made their keeper make a great triple save. As the game was ending, Vaz had yet another oneon one with the goalie, but decided to pass the ball across the goal, but the chance of an extra goal went missing. Like last week the defence is not good enough but this team never knows when it is beaten.

David Winder won the ham via the entrance raffle, and D. B. Won the name card.

Next week we are away at RAFAL be there, it’s getting exciting. Full details will be posted when known.