Juan Abeal became the first Spanish winner of a major Lawn Bowls competition in Spain’s 40 year association with the sport, when he won the prestigious Andalucian Championships Men’s Singles. 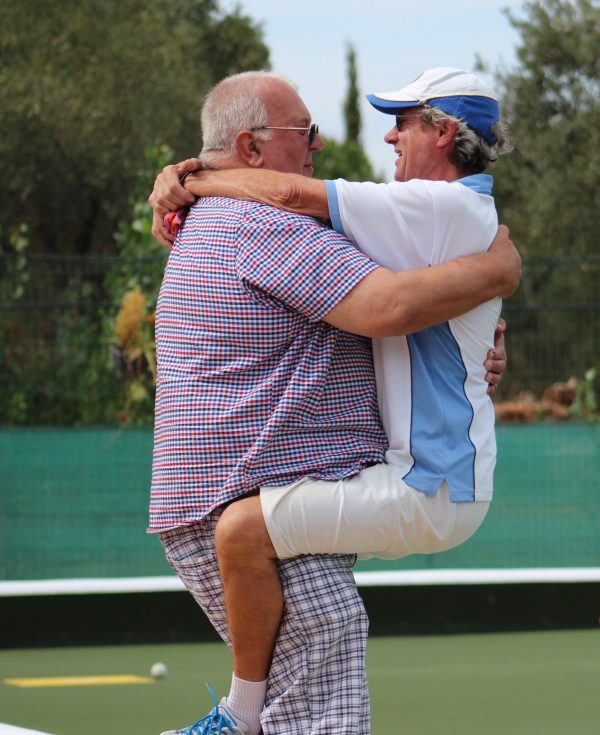 A member of the Benalmadena Bowls Club, Juan –  a popular figure on the Lawn Bowls scene – was dominant throughout the 8 day tournament and literally leapt with joy as he clinched the title.

The Linea Directa Andalucian Championships is a prestigious Tournament held every year to bring together the best bowlers in the Region. Run by the sports governing body, the Federacion Andaluz de Bolos, the location is alternated between the Almeria Province and the Malaga Province each year. This year it was the turn of the Malaga Province in general and Lauro Golf Bowls Club and Mijas Lawn Bowls Club in particular.

With almost 400 entries the Linea Directa Andalucian Championships  is a perfect opener  to the Lawn Bowls season which will culminate next May in the National Championships.

In the Men’s Singles Final Juan comfortably overcame the challenge from John Henworth, who had himself bowled very well all tournament but couldn’t quite reach his peak and lost 21-5.

The Ladies Final was contested by two very experienced bowlers, Jan Dando from Indalo Bowls Club and Barbara Land from Don Pablo Bowls Club, both of whom represent their respective Provinces. On this occasion Jan bowled just that touch more consistently to emerge a comfortable and well deserved winner by 21 -9

In the Men’s Pairs a surprise “scratch team”, Don Smith (Don Pablo) and Barry Holt (Lauro Golf Bowls Club) who only got together  when their original partners dropped out, bowled superbly all the way to the Final. Their opponents  David Horton and Richard Swain (both from Indalo) had also had a very good run in and the Final lived up to its expectations as two in form teams gave an excellent display. Barry Holt and Don Smith holding on to a 15-8 lead after picking up 4 shots on the 13th end, to win 16-14.

The Ladies Pairs saw the excellent Jan Dando paired with Club team mate Mo Frith, who was appearing in her first major final. They were faced by tough and experienced opponents in Mary Dethridge (Don Pablo) and Margaret Kain (Santa Maria) and we were expecting a classic final. However, Lawn Bowls is all about “on the day” and accurate and consistent leading by Mo was supported by some excellent shots from Jan and the pair ran out 20-10 winners. 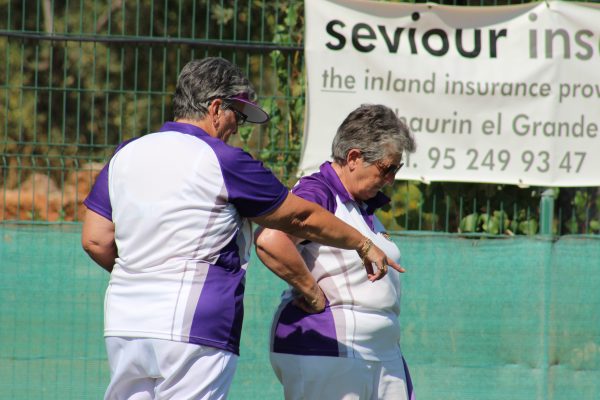 The Mixed Fours saw another Indalo team in the Final as Gerard Donck, Keith Harvey, Linda Harvey and Caroline Micklefield faced a Santa Maria team of Craig Lewis, Brig Gunn, Sandra Lewis and Andy Salmon in a cracking final where the score changed end to end and both Skips played some wonderful saving or conversion shots –  none more important than Craig running the jack into the ditch on the 13th end to pick up a 6 when 2 or 3 down on the end. That 6 proved to be the difference as Craig’s team ran out 20 – 14 winners.

Speeches from Ron Jones, the Malaga Delegado and Ruth Compton, the Almeria Delegado, rightly praised the hard work and expertise of both host Clubs and the commitment of the bowlers themselves. Paul Hughes, Lauro Captain replied on behalf of the hosts, thanking every one for their support over the week.

The Championships were brought to a close with a Farewell Dinner hosted by Lauro Golf Bowls Club.