SAMM members also enjoy many social activities, most prominent amongst them is pleasure sailing. As a prime example, on Thursday 21st September Balaton Group members had a most enjoyable outing, to Thomas Maestre, organised by Bob Lagden and Sandie Clarke.

Meeting on the CTD jetty at 10-00am in perfect weather, they found that the Malta outboard on their dinghy would not start, so launched the SAMM Whaly support boat and had some fun loading everybody in, plus the cabin seat cushions for their 6 meter Araez Arabel 20 “Lavanter”, that had been cleaned by Carol Sibson. 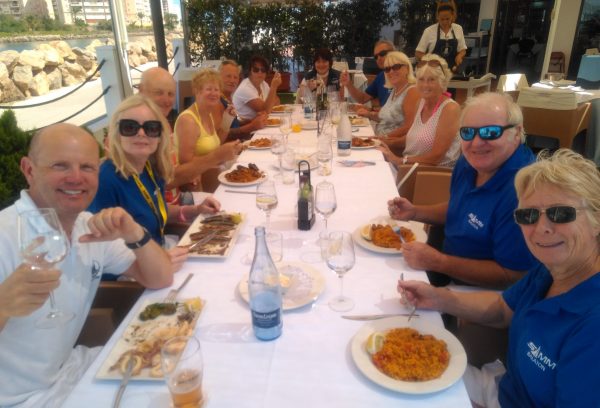 They took two of their three boats presently on the water, Lavanter, crewed by Bob Miles, Robert Hudson, Carol Sibson, Willy Ross and Rona Agnew plus “Sirocco”, a 6 meter Sailfish 18, crewed by Julian Pering, Bob Lagden, Steve and Catherine Rocks. Sirocco had a 10 minute start whilst Lavanter’s crew secured the Whaly and figured out the jigsaw puzzle of the seat covers.

In a 10 knot NNE breeze both boats made good time beating across the Mar Menor, arriving together in under an hour and a half and needing only one short tack to gain the entrance to the Marina at Thomas Maestre, the wind conveniently dropping to about 8 knots to make mooring easier. With perfect timing Balaton members Mike and Kate Egar followed them in on a Deltania Group boat out of Los Urrutias. 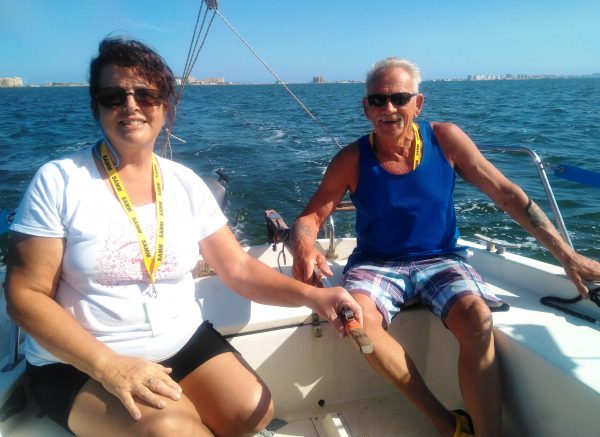 They were joined by Heather Bell, Jo Pering, Jan Penning and Sandie Clarke, who arrived by car, and all enjoyed a good meal at the Club Nautico Restaurant, the majority choosing one of the  various paellas but the sardines and mussels looked good too!

The trip back was equally enjoyable, running before the steady breeze, and again they crossed the Mar Menor in under an hour and a half, a good time having been had by all.

For more information on the Balaton Group go to http://www.balatonsailinggroup.com  or www.sailingmarmenor.com

Hooting & Cheering’ at the Torrevieja RNA