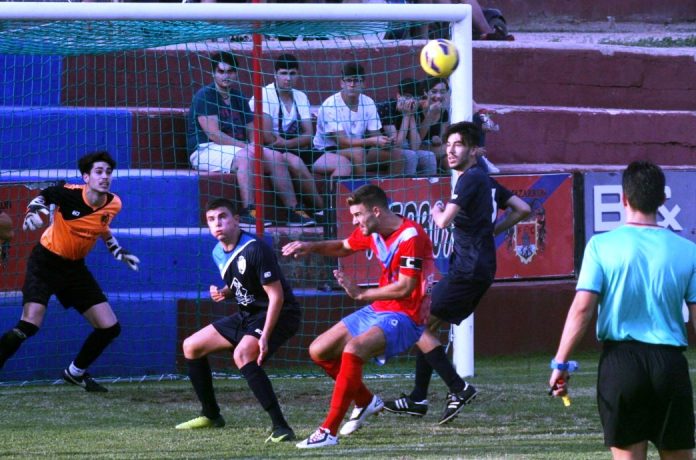 With Mazarron holding on to the top position in our league (Preferente Autonomica) after the remainder of the games were played last Sunday and AD Alquerias bringing up the rear in the bottom position, the result of today’s match should have been a forgone conclusion, but the match we were about to watch was probably one of the most bizarre games of football I have ever witnessed.

Mazarron got the game under way and within three minutes Mazarron’s Javi Torrano (no 10) found himself facing an open goal, but for a split second the first goal would have been scored. Luckily for Alquerias, their keeper leapt in to gather the ball.

This reprise for Alquerias was short lived as a great ball was picked up by Basi (no 9) who kept his cool and put the ball in the net for Mazarron’s opening GOAL just four minutes into the game.

Mazarron stayed firmly in control but a miss controlled ball by Adrian Campoy (no 5) nearly gave Alquerias a break, but the shot went just wide of the target.

Encouraged by this, Alquerias had a new lease of life and a long pass from the half way line landed in the box, and with a close range side slice, found the back of the net.

So with the teams back on a level playing field at 1 – 1, the game became more even and Mazarron realised this may not be the “piece of cake” they had envisaged.

Now 25 minutes into the game, Mazarron’s Andreo (no 6) made a bad tackle bringing down the Alquerias player and then landing on top of him, all hell let loose, with players from both sides arguing with the referee and linesman and each other.

The result – two red cards for Mazarron as both Andreo (no 6) and Alfonso Canovas (no 8) were sent for an early shower.

Now down to nine men Mazarron had to reshape and compose themselves.

Even with only nine men Mazarron’s skill still towered above that of Alquerias .

A long ball was reached by Basi (no 9) who took the ball into the box and was one on one with the keeper. Skill played its part and the ball was easily slipped pass the keeper for GOAL number two at 35 minutes.

From a corner, the ball was taken short to Javi Torrano (no 10) who shot well from 25 yards out and GOAL number four for Mazarron.

The half time whistle was blown and we all could not believe what we had just witnessed.

Alquerias kicked off the second half

Even with nine men Mazarron were not letting up and three minutes in, Dani Morales (no 7) was again in the box and the ball was in the net – GOAL five for Mazarron.

Just three minutes later Basi (no 9) was looking to improve on his hat-trick from the first half and with excellent ball control, took the ball into the box and GOAL six for Mazarron.

65 minutes in Mazarron were tiring and Alquerias took advantage. They constantly struck long balls into the Mazarron half but with all nine players now taking on a defensive role, they could not find a way through.

Mazarron’s goal keeper Dani Caro (no 1) gathered the ball with ease as the Alquerias strikes lacked any pace or power.

The whole game was now slower and Mazarron made three substitutions to bring on fresh legs as the players were visibly exhausted but unfortunately this did not help as Alquerias  put away two goals at 79 and 81 minutes, both very soft goals that with a full team Mazarron would have easily dealt with.

Mazarron made four substitutions in the second half.

Alquerias made three substitutions throughout the game.

Man of the match voted for by Los Amigos de Mazarron FC was Basi – number 9 – our prolific goal scorer.