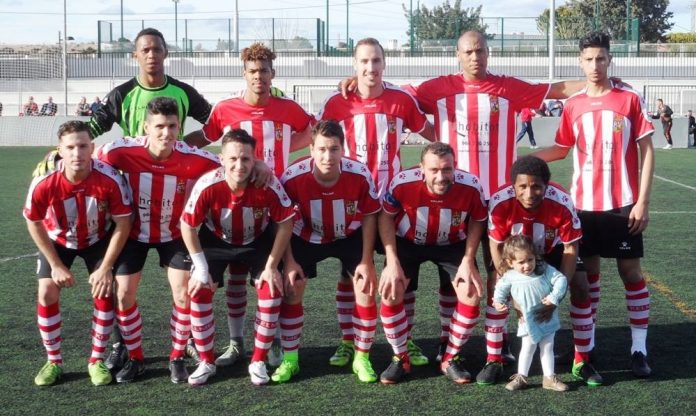 An historic day as it’s the first home game for Monte in the 1st Regional level since 1975, and after last week’s defeat against San Juan, it was essential to get a result today. After just 13 minutes into the game,Vaz was pulled down as he was going through to goal, resulting in an immediate red card for the Santa Pola player.

After 23 minutes, Vaz  scored his first for the new  season, following a delightful through-ball from Luis. 3 minutes later Santa Pola scored, but was immediately ruled an easy offside, and the goal was disallowed. But on 37 minutes, Santa Pola equalised with an excellent goal. On the stroke of half-time, Vaz was once again brought down on the edge of the box. A yellow card was issued, plus a free-kick, but the shot went just over the bar. Half-time 1 – 1.

15minutes into the second half Manuel and Daniel Saez were replaced by Jesus and Dario. 5 minutes later Vaz missed a perfect opportunity to score but failed on a one-to-one with the Santa Pola goalie. A minute later, Carlos Ventura sent a shot just wide of the post. Vaz was once again fouled, but the free-kick came to nothing. Alex was substituted by Maccan, but  on 30 minutes Santa Pola scored.

Carlos Ventura headed wide after some good play. Dimitry was substituted by German. The game ended with a loss for Monte 1 – 2. The game overall was even, although Monte were the better team the first half.

But with Santa Pola only having 10 men for most of the game they deserved the win. Monte need to increase their intensity in the middle of the field, and step up a gear. Perhaps things will change when Manager Carlos has a full first team at his disposal.

There was quite a large crowd of 327 people.  Man of the Match was Dimitry.