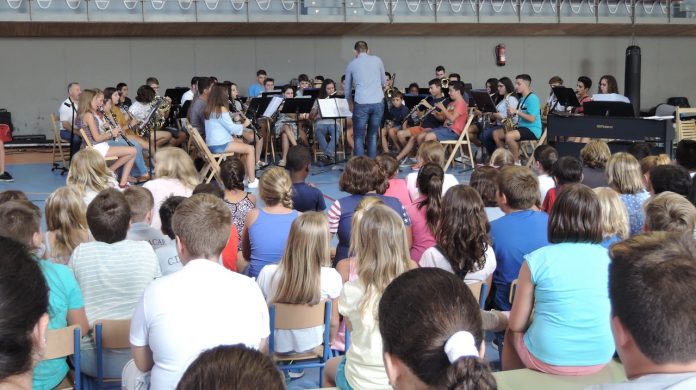 Mojácar Town Band recently gave a concert at Bartolomé Flores School, giving them a chance to show off their skills to the 4th, 5th and 6th year primary pupils, whilst at the same time taking the opportunity to get the children interested in the world of music and encourage them to take up an instrument.

The concert included a selection of well-known tunes from some of the children’s best loved films, which get them singing and clapping their hands along to the music.  Miguel Ángel Miranda, Band Director, also introduced his young audience to different types of wind, string and percussion instruments, as part of both his and the Council’s aim to further awareness of the Music School’s work to both the local children and their parents.

Mojácar’s School of Music began its journey in 1991, with tentative steps by a few willing people who offered music and piano classes with the on-going support of the local Council.  This then grew bit by bit, until the group passed into Municipal hands in 2002, the same year as the Town Band was officially formed with the existing pool of musicians under the baton of Diego Martínez.

Today the Town’s School of Music and Dance boasts around 200 students, with new projects springing up, including the formation of a choir and a new music band made up of the very youngest pupils with those at the first steps in their studies.

Currently, the Town Band has 70 musicians, who last year gave over 35 performances and took part in numerous competitions throughout Spain and, despite the young age of most of the group, it ranks in the top ten in the Province.

Promoting music and encouraging young people to learn related skills is a top priority for Mojácar Council and its Culture Councillor, Raquel Belmonte, starting with getting them involved at a very early age. In the “Music and Movement” workshop, children aged three to seven can learn the basics and practice through musical games, which according to experts, has great educational benefits as well as helping their development in general.