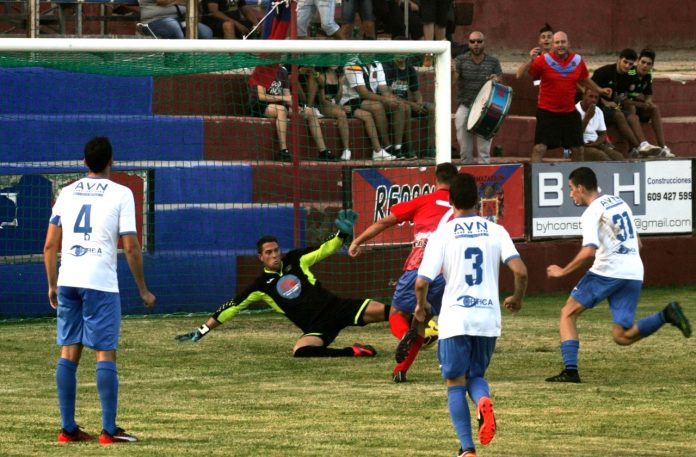 The second home match of the season got underway with a bright fast start. The play was end to end as each of the teams found their way into the game.

Esparragal made the first impression on the game as a free kick into the box caused some goal mouth confusion and it was a lucky escape for Mazarron as the ball was cleared.

As Mazarron moved up the field they too missed an early chance as the ball bobbled around the box before being gathered by the keeper.

As both teams settled into the game Mazarron had the better of the play, showing the better skills and passing ability. Notably from Andreo (no. 10).

A Mazarron free kick, taken from the side of the box, was headed just wide of the target by Adrian Campoy (no 5)

Mazarron should have claimed the first goal of the match as a long ball from a free kick was headed onto the crossbar – good work from Alfonso Canovas (no 8).

Now, well into the first half, the game calmed down with some uneventful midfield play until Mazarron broke down the field with some good passing for Jose Antonio (no 7) to shoot well, but slightly too high, and the ball sailed over the net.

Mazarron kicked off the second half. Esparragal claimed the ball and broke up the field, their player being one on one with the Mazarron goalkeeper, the well taken shot was excellently saved.

A pass across the goal mouth by Basi (no 9 ) failed to reach any other Mazarron player, another missed opportunity.

With the game firmly in Mazarron’s control we all hoped it was just a matter of time before the ball would find the net.

Our wishes were soon granted as a Mazarron corner was taken short, passed into the box where our new signing Gato (no 3) just chipped it in for GOAL number one.

With Mazarron continuing to push forward, finding the ball in the box it only took a cheeky sidewards knock on for Jose Antonio (no 7 ) to find the net for GOAL number two.

An unfortunate clash gave Mazarron their first yellow card for Raso (no 4) – a little harsh, I feel.

Slowing the play down, Esparragal tried to get back into the game, and a shot on goal was only just wide of the target.

Their hopes were short lived as Mazarron pushed forward again. Esparragal’s defence was holding till Basi (no 9) hit the ball and it bounced over the goalkeeper and into the net – GOAL number three for Mazarron.

Feeling the game was theirs, Mazarron were playing for time, knocking the ball between themselves in their own half, but a mistimed pass by Boudia (no 6) was picked up by Esparragal and sliced into the net, but with only 15 minutes remaining, Mazarron hoped it was too little too late.

Esparragal kept up the pressure but Mazarron were holding fast.

Their hopes were finally dashed as Mazarron put away GOAL number four at 89 minutes, as Basi (no 9) side stepped the oncoming goalkeeper to find the net for the second time.

After one last forward strike from Andreo (no 10) the final whistle was blown and Mazarron walked away with a well deserved 4 – 1 win.