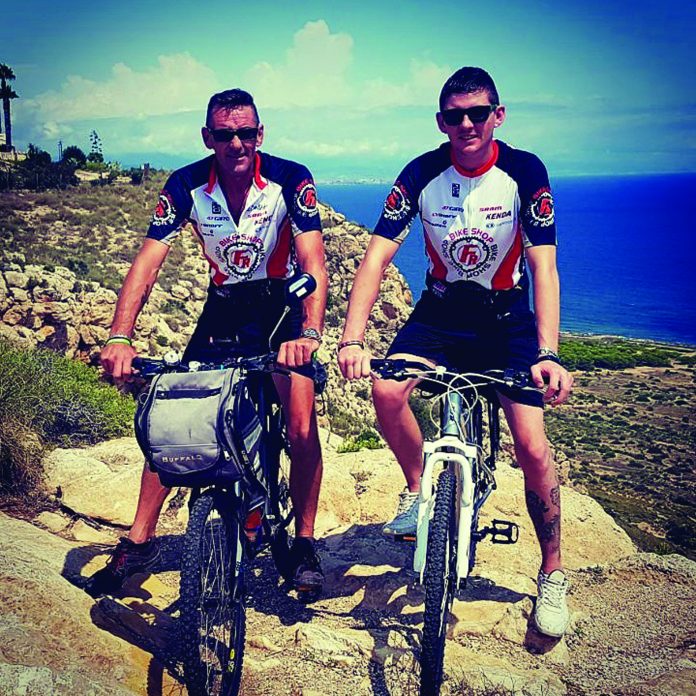 Once again Dave and Mitch Bull are off on another adventure raising awareness and funds for charity.

Last year the father and son team headed off on a mammoth 6500km journey around the perimeter of Spain and in 2015 they rowed two kayaks 52km down the River Segura from Murcia to Guardamar on the coast. Why do they do it? Well, in 2014 a close family member was diagnosed with terminal cancer and wanting to do something to help the lads came up with the idea of the first challenge; the kayaking.

Last year saw them visit 23 cities while travelling around Spain and raising the profiles of their chosen charities. They strongly support the Samaritans in Spain and Dave is also the patron for them.

This time the pair will cycle from Gibraltar to their homes in Gran Alacant, some 800km in 10 or 11 days!  Camping at night and again living on a 5 euro per day budget for feeding themselves they will also meet up with friends and supporters as they head home along Spain’s southern and south eastern coasts.

They will leave Gibraltar on the 24th of October, having travelled down overnight on a bus, and head along the coast for their first night’s rest on the road somewhere near to Fuengirola and then push on up the coast via Marbella and on to Nerja, Motril, Aguadulce and Almería. From there they will hug the coast up to Mazarron then head up to Cartagena before going to the end of the Mar Menor and then Torrevieja for the last leg home.

It’s a huge distance and covering 80km each day will not be easy but Dave and Mitch tell us they’re ready for it, so good luck to them and we’ll bring you more information as the time to begin this challenge gets closer.

Any donations to the causes can be done via their own websites (with the lack of a Just Giving type of site available in Spain) – see the links below – and Mitch and Dave ask that you let them know when you have done it to keep a record of the amounts raised.