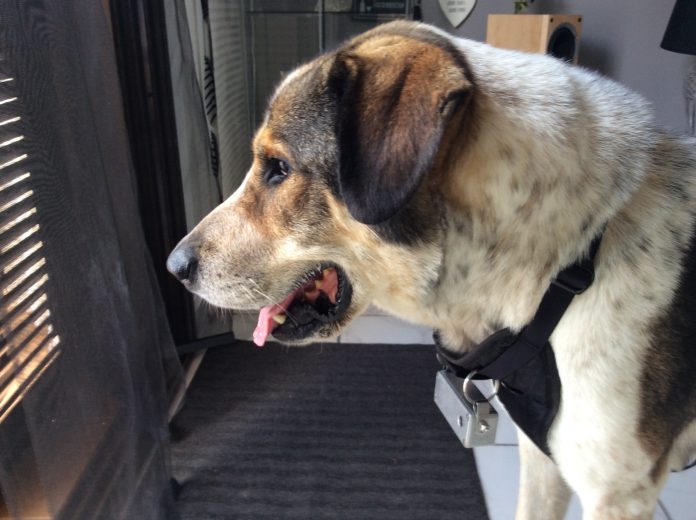 This is Liam Neeson, “Some mornings I wake up and think, gee I look handsome today,” he is a Spanish Mastin.  Spain has not always been kind to Liam, Save a Mastin rescued him from the Valladolid Perrera, he had been abandoned, he was ill and had problems with his eyes.  Liam had ehrlichiosis, a tick borne infection.  Liam was treated for the ehrlichiosis and is now free of the disease, but, sadly for Liam, his sight could not be saved.  Liam is now totally blind and had lost all confidence; even going for a walk was a major event.

Liam went into foster in Malaga, but is now in foster in Hacienda Del Alamo, Murcia.  We, Liam’s new fosterers, did some research into blind dogs and decided that an echolocation unit would be the best solution for Liam.  Save a Mastin and Brigitte Jaquillard, did not hesitate and a BlindSight S2 was purchased from Jordy Candy Inc., in America.  This, as far as we are aware, is the first echolocation unit to be fitted to a dog in Spain.

It is a wonderfully enabling device, what is better than enabling the blind to “see?”  Liam’s confidence has grown immeasurably since he has been fitted with the BlindSight.  He is able navigate partially open doors!  It is still early days and if he gets excited and moves too quickly he may still bang his head.  We are, however, delighted with Liam’s progress with the BlindSight.

There must be many blind dogs in Spain who could benefit from a BlindSight device.   Let Hacienda Del Alamo, Fuente Alamo, Murcia and Save a Mastin lead the way in enabling the blind dogs of Spain.  People and dogs may have disabilities but it is society that disables them.

It is people who park cars on the pavement, leave water meter doors open and allow their hedges to overgrow the pavement that disables blind dogs, blind people, wheelchair users and mothers with pushchairs.  Save a Mastin and Liam want to raise awareness and funds so that many blind dogs may be helped.

“The eyes those silent tongues of love.” Miguel de Cervantes

The BlindSight units are 3D imaging SONAR emitters.  SONAR works by the principal known as echolocation.  Echolocation is the use of sound waves and echoes to determine where objects are in space.  Bats use echolocation to navigate and find food in the dark.  To echolocate, bats send out sound waves from their mouth or nose.  When the sound waves hit an object they produce echoes.

Other attributes of an object may also be determined, such as size and even surface texture The use of “echolocation” can benefit an animal by providing relative location, distance and other information.  This information is not affected by lack of sight.

This Cat Bowl Will Solve ALL Your Problems!

You Can’t Be Serious. ‘That Darn Cat’

Police to put dog walkers on the clock