Tasha’s XI (a squad of around 30 local, volunteers, who have each donated €10 for the privilege of playing, and who have been encouraged to bring along as many supporters as possible!) will be coached by former professional Arsenal and Welsh International, Peter Nicholas. (Photo attached) They will play a Police and Public Services XI, organised by the Town Hall. 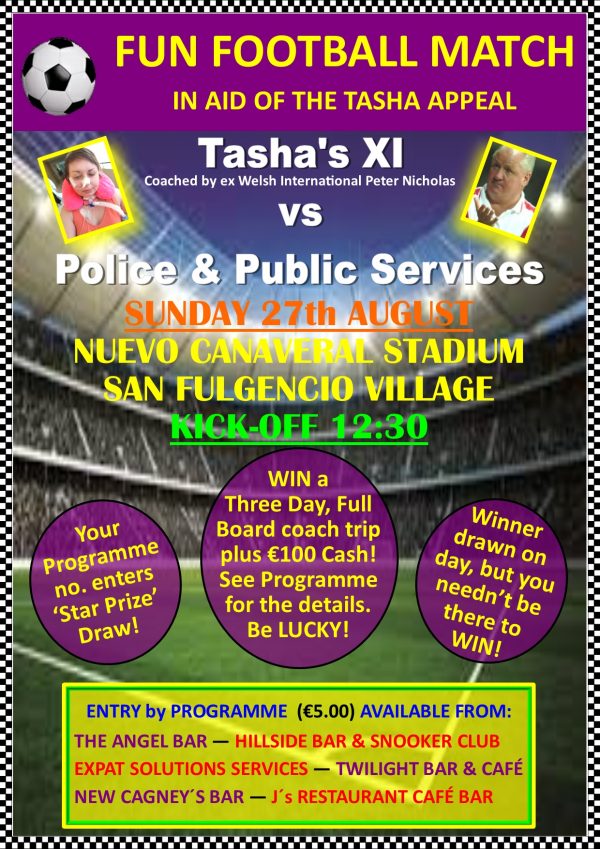 The Winner’s Trophy is an Official Copy of the F.A. Cup (officially known as, The Football Association Challenge Cup), which obviously cannot be retained by the winners, but for a €1 donation anyone can have their photo taken holding it, alongside Peter Nicholas.

Britain’s Got Talent entrant, Nikki G, will be performing before the kick-off and Big FM have agreed to attend with music and p.a. system.. Bar drinks and soft drinks will be available at the ground.

Entry is by numbered Programme, available at the gate and from the following premises in Urb. La Marina, after Wednesday 16th August: The Angel Bar, The Hillside Bar & Social Club, Expat Solutions Services, Twilight Bar. In addition, people can contact Tom Whitmore on 663159417 who can reserve programmes and arrange delivery and payment collection.

The Programmes cost €5 and include an entry into the Star Prize Draw: a three-day, full-board trip for two to the Cuenca Region from 1st to 3rd October 2017, courtesy of David’s Coachtrips S.L. — plus an anonymous donation of €100 spending cash — making a total value €400! It is not necessary to attend the match in order to win. Simply leave your contact details with the seller and you will be contacted if you have the lucky number, which will be drawn by Tasha herself (subject to health) at HALF-TIME.

ARE YOU READY TO PANTO?