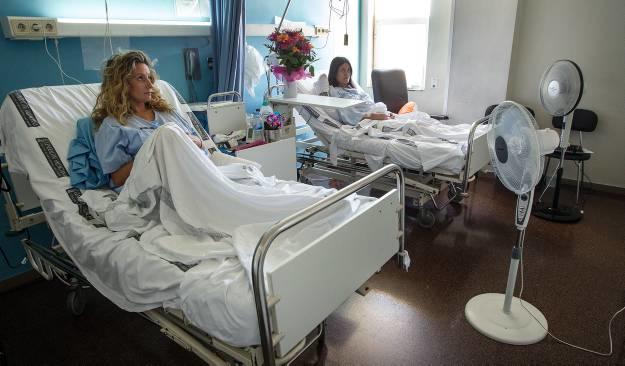 Spare a thought for those ladies lying in the Gynaecology ward in Alicante General Hospital, not only because of the discomfort and the pain they are suffering as they prepare to give birth, but also because of the fact that the air-conditioning unit seems to have no effect, as a result of which many have resorted to bringing in their fans from home.

Judith and Lidia who occupy a room on the third floor said that temperatures in the ward is touching on thirty degrees despite the fact that the aircon unit is on but seemingly operating only at low power.

“In our respective conditions we are uncomfortable enough without having to suffer from the heat as well,” said Judith who has been in the unit for the last eleven days. “I have at least another month in here so I have had to bring a fan of home so as to try to cool me down. All day long the temperature rarely moves from the thirty degree mark. It is absolutely stifling.”

The maintenance staff have looked at the problem on 4 or 5 different occasions according to one member of staff, but, despite putting the thermostat on its maximum setting the units seems to have little effect.

The problem, according to one of the technicians who has gone through the room to find a solution, is not a repairable punctual damage. “The maintenance boy has already come four or five times. It puts the thermostat to the maximum, but the situation does not change. He told us that the device does not give more, that if it is not changed there is no way that it works correctly, “Martinez says.

In an adjacent bed, targeted by another fan brought from home, Lidia said that she considers the high temperatures to be only a minor inconvenience when compared with the discomfort she is suffering with her pregnancy. “I spent four hours in the dilation room at more than thirty degrees. Even the matron and her staff nurses were perspiring, “explained the young patient.

At the end of the corridor an older woman leaves the door open to attract the cooler air from the corridor, where the aircon unit does work properly.

Rosa Queijas, union delegate of UGT at the General Hospital of Alicante, said that she has been assured that the unsatisfactory units causing all the problems will be changed in the coming days.