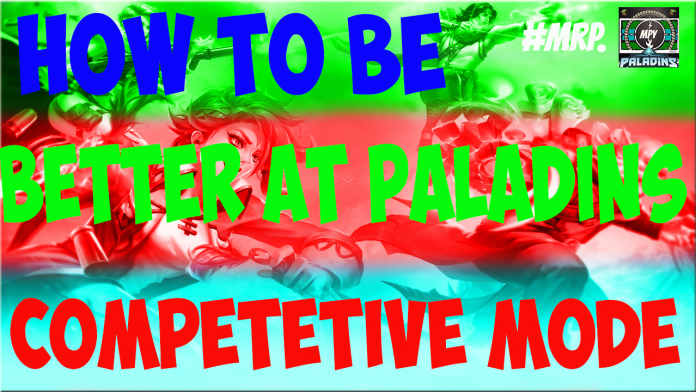 Paladins is an AMAZING, free to play, arena based shooter, where If you have bought the founders pack you can PLAY AS A LOAD OF DIFFERENT CHAMPIONS! Paladins not only has a casual mode where you can simply play for fun with no worries of loosing rating. It also has a competitive mode which is the focus of this article/video (depending on which platform your watching/reading this one).

Like I said generally people who play paladins competitive mode, which is in beta and set to have some big changes, play it to obtain rank for their champions. In the process of obtaining rank, you will, upon earning enough points, obtain different borders for your champions to “show-off” your skill to other players. There are 3 different borders as of now, platinum which is obtained once you have had 5 victories on competitive on one champion, diamond which is obtained when you have earned 4000 points by getting victories, of which this takes ages! And lastly the one everyone aims for, which consequently has a ugly border, master rank which is obtained upon reaching 4500 competitive rank!

Platinum rank is therefore very easy compared to the other ranks, and therefore you don’t have to be as good to get this level, whereas if a player has diamond or even MASTER rank you can be sure they are a VERY GOOD PLAYER!

So before I actually start the proper AIM of this ARTICLE, let me tell you there are set to be changes to be made to the competitive mode on Paladins. However these changes DO NOT  make a difference to ANY of these points so they ARE RELEVANT and WILL STAY RELEVANT… for ever… probably! (All they are adding are mini ranks between the big ranks to add more reason to play competitive. XD)

OK so moving on… Here goes the more ranty part…… If you are a new player, don’t have experience with casual yet, don’t know how to use your champion properly, aren’t going to play your role properly (which I will get into further later) then DON’T PLAY COMPETITIVE! There are obvious reasons for this, If you have no experience with the champions or even the game at all then DON’T jump into competitive… Because IF you loose then all you are doing is HURTING THE OTHER PLAYERS ON YOUR TEAM…. If they have a rank, by losing you, are making it so their rank will rapidly drop and they may lose A LOT OF POINTS!

The other point of PLAYING YOUR ROLE, is probably the MOST important. In paladins as most of you will know you have four classes. Support, Front line, Damage and Flank.

Therefore IF you are a FRONT LINE, your JOB IS TO STAY ON THE POINT, and act as a DAMAGE SPONGE and absorb all the damage so your other champions don’t have to take it! Its actually PRETTY OBVIOUS, that’s why FRONT LINES, or as they are also known TANKS have MASSIVE HEALTH AND SHIELDS… THIS IS SO THEY CAN TAKE ALL THE DAMAGE AND THEN GET BACK UP! I see it TIME AND TIME AGAIN, Front Lines who try and hunt enemies champions down to get the kill! They are not meant to deal damage! They are MEANT TO TAKE IT! And if you do decide as a FRONT LINE to hunt enemies down you will ALMOST ALWAYS DIE! So as a TANK, BE A SPONGE STAY ON THE POINT, AND DO YOUR JOB IN PUSHING OR CAPTURING THE OBJECTIVE!

OK onto round TWO! If you are a support or also known as HEALER, your job is, you guessed it TO HEAL PEOPLE! And GUESS WHO YOU SHOULD BE HEALING? The FRONT LINES, who are taking all the damage, you HEAL THEM SO THEY CAN TAKE MORE DAMAGE! SIMPLE! Where do you stand, you may ask, BEHIND THE FRONT LINES SO THEY TAKE THE DAMAGE AND YOU HEAL THEM WHILE FIRING FROM THE SAFETY OF THERE SPONGY SHADOWS!

Pretty SIMPLE right? ONTO ROUND 3, let the match COMMENCE!

DAMAGE champions are probably the easiest class to play as. THEIR role, you guessed it, is to PUMP OUT AS MUCH DAMAGE AS THEY CAN! Who should you target be IF YOU ARE A DAMAGE CHAMPION? Remember I said Front Lines has MASSIVE HEALTH POOLS, and SUPER TOUGH SHIELDS? Well YOUR MAIN AIM AS A DAMAGE CHAMPION IS TO BUST THOSE SHIELDS AND THEN KILL THE USER! Easy PEASY! Now I hear you. What do I DO IF A FLANKER KEEPS KILLING ME, OR THEIRS A CHAMPION WHO IS WRECKING MY FRONT LINES??!! If that’s the case and they’re coming after you THEN PUMP EM FULL OF LEAD… OR LASER BEAMS… OR ARROWS, you get the point…. If there Is NO FRONT LINE TO KILL, FOCUS ON OTHER DAMAGES! You may even want to focus on them as equally as you do the FRONT LINES, as like you they are trying to destroy your TANKS who are your DEFENSIVE SPONGES! This is generally why DAMAGE CHAMPIONS HAVE A SPLASH DAMAGE ABILITY AND A DIRECT DAMAGE! Direct is to Burst shield and ruin champions! And burst is to directly damage all the enemies in one blow! That was confusing…. Anyway burst is to deal with the CHAMPIONS behind the TANKS and Direct, you guessed it, is to deal with the tanks!

OK lastly on to FLANKS! Whats their job you ask? TO FLANK. In essence this means go behind enemies lines and attack them from behind. This is why most flankers can deal high damage, and have escape abilities. This is obviously so they can get in make a kill and escape with ease! Who should your target be… the players who are causing the most damage to you team…. whoever that may be! Mainly focus on DAMAGE CHAMPIONS, LONE TANKS, DEFINITELY SUPPORTS…. especially is they have no cover! AND IF YOU CAN FLANKS!

OK I REALLY HOPE THIS ARTICLE HELPED YOU PALADINS LOVERS OUT! WHY NOT HELP ME OUT BY WATCHING THIS VIDEO AND SUBSCRIBING TO MY YOUTUBE CHANNEL! ANYWAYS PEACE!!