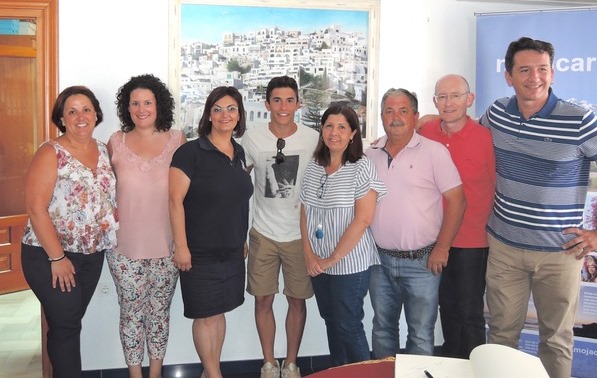 Marc Márquez and his brother Alex, also a champion motorcyclist, are both regular visitors to Mojácar as they enjoy the tranquillity of the town during their precious moments of free time.  During his current stay Marc stopped off to sign the Town Hall’s Book of Honour. Alex however, was unable to sign this time as he is recovering from a recent racing accident, so he passed on his sincere thanks via his brother for their honour and said he would be more than pleased to sign it on a future visit.

Mark told Rosmari Cano, the Mayor, of their intention to keep coming back to Mojácar whenever they could. On behalf of the Town Council, Rosmari presented him with an Indalo, saying that she hoped it would bring him good luck and a 4th Moto GP title! As current championship leader, he hopes to increase his grip on the title in Czech Republic on August 6th. She also presented him with a book about the history and legends of the town saying “legends for a legend”, but with his customary smile the unassuming champion replied, “not quite yet”

For sure, he is on his way, as he was the youngest ever Moto GP title winner at 24.  He is also the youngest double, and three times world champion in the discipline.  He has 56 race wins and 91 podiums, 51 fastest laps including many lap records, as well as 61 pole positions.

Hopefully, he will return to Mojácar soon and, if possible with even more world titles.