The Guardia Civil has now arrested twelve people for their involvement in the murder of a 49-year-old Italian citizen Claudio Lanfranchi, from Ardesio, a small village of just over 3,000 people, in the north of the country close to the border with Switzerland, who was suffocated and beaten to death at his home in Playa Aguamarina on the Orihuela Costa, at the end of January last year. The arrests have taken place in several locations including Germany, France and Romania.

The crime itself is understood to have been committed by four hooded men that beat him up, robbed and left a female friend tied up and gagged.

In his statement to the press on Thursday morning the Commander of Alicante’s Guardia Civil said that eight men and four women from Kosovo, Rumania, Bulgaria and Spain, aged between 23 and 40, have been detained for the crime, in which they had varying degrees of involvement.  The charges include murder and robbery with violence and intimidation, all of which were committed at the victim’s home, in the Orihuela Costa.

The Guardia attended the scene following a call from neighbours at dawn on 25th January, 2016 , When they arrived at the house they found the 49 year old Italian man with obvious signs of having met a very violent death. 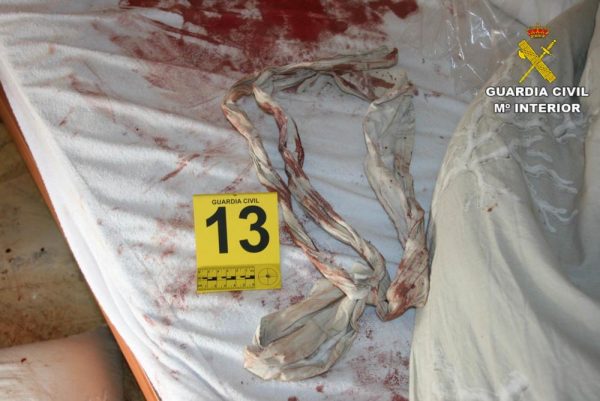 They found another victim in the house, a woman of Romanian nationality, who had been tied up and gagged before she was then left to witness the beatings and murder. After she recovered she was able to provide the agents with information of the morning’s events.

She said that the couple were sleeping in the house when four hooded men burst into the bedroom. After immobilising the man, they forced her into the dining room while they spoke to the man in Italian and Romanian, repeatedly shouting in Italian at Lanfrachi , “Where is the cocaine”?.

The house itself was completely ransacked, cupboards destroyed, mattresses were cut open and the garage was also thoroughly searched during the attack.

They then started to beat the man with extreme violence, asking for money and drugs that they insisted were secreted in his home. The beating was so severe that the man died. However, as the autopsy later revealed, the death was actually caused by asphyxiation, as the robbers had used a knotted sheet which they gradually tightened around his throat.

It appears that the gang failed to find the drugs although they did manage to steal a mobile phone, a luxury watch, and about 3,000 euros in cash.

Mr Lanfrachi had lived on the Orihuela Costa for a little over a year and was looking to put down semi-permanent roots. He had recently made appointments with several local Realtors, and was said to be viewing property in the area during the week following his violent death.

Early evidence gathered at the scene led the investigators to one of the possible culprits, an individual of Kosovo nationality, identified as EC, who fled his home in Torrevieja just hours after the murder. It is thought that he was about to fly to Germany along with his Spanish girlfriend.

On 30 May 2016, following further investigations, EC was detained in Dusseldorf (Germany), extradited to Spain and remanded in prison as another of the suspects. He was moved to Spain following the issue of a European Arrest Warrant.

As a consequence of the ongoing extensive investigations, three more detentions took place, beginning with MM, on October 24, 2016 in Fuensalida (Toledo), DI, on November 15, 2016 in Torrevieja and on the following day, the arrest of DCC in Tavernes de Valldigna (Valencia).

There were further arrests in Torrevieja, Rumania and Bulgaria as a result of which It is thought that all four perpetrators of the actual murder are in prison in Spain and awaiting trial.

It would appear that the victim had a past of drug problems having previously been convicted of a drug related offence in 2003 in Bergamo.