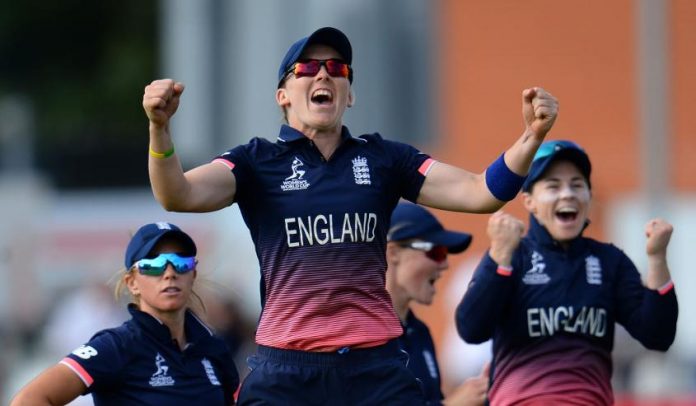 The host is now top of the standings, with Australia second in the race for the knockout stages, but the top five teams are within one point of each other

Video and audio interviews of captains and players, photographs available on the Online Media Zone for free download and editorial use

Jenny Gunn held her nerve as England inflicted Australia’s first defeat of the ICC Women’s World Cup, while also replacing its opposition at the top of the points table, with a thrilling three-run win at Bristol.

Defending 16 from the last over, Gunn did just enough to secure the victory – despite Ellyse Perry’s 70 from 86 balls as the Southern Stars narrowly failed to chase down the target of 259 for eight.

No Australian batter other than Perry was able to cash in on their starts as it ended on 256 for eight, with England registering its fourth successive victory as qualification for the semi-finals was blown wide open.

In the day’s other game at Derby, the West Indies recorded its first victory of the competition after beating Sri Lanka by 47 runs, although both teams are out of contention for the knockout stages.

West Indies put on 229 for nine at The County Ground, with Merissa Aguilleira’s patient unbeaten 46 leading the way, before Sri Lanka was skittled for 182 from 48 overs.

Anisa Mohammed was named player of the match after taking three for 39 with the ball, as Sri Lanka remains winless in the tournament.

Katherine Brunt’s quick-fire unbeaten 45 and a dogged two for 42 with the ball led the way for England to record a first ICC WWC win over Australia since 1993, a narrow three-run triumph in Bristol.

The host country now looks well-placed to reach the semi-finals as it tops the table with just two games remaining, but only one point separates the top five as a mouth-watering conclusion to the group stage beckons.

Chasing 260 to win, Australia had put on 56 for the opening wicket at The County Ground, but when Beth Mooney and Nicole Bolton fell in the space of three overs, it was precariously placed.

Meg Lanning and Perry put on 57 together though the run-rate kept increasing, as Alex Hartley’s brilliant spell of two for 31 resulted in her bowling the captain.

Natalie Sciver then caught Perry just a few moments after a vital drop, and with too many runs needed, Alyssa Healy and Ashleigh Gardner couldn’t do enough as England ran out narrow winners thanks to Gunn’s nerves of steel.

Tamsin Beaumont had led England’s batting effort with 49, as she and Sarah Taylor motored along after Lauren Winfield’s early dismissal.

At 174 for six, England was in danger of not fulfilling its overs when 13 still remained, but Gunn and Brunt, who made a career-best 45 not out, gave them something to defend and Brunt was delighted to come up trumps in front of a packed crowd in Bristol.

“It’s always a show with England v Australia and I am happy I performed well,” said player-of-the-match Brunt.

“I think 200-220 was good, so to finish with 259 gave us a lot of confidence. As a bowler, I don’t really like bowling on these flat pitches but both sides varied their pace really well and it’s just a case of executing your skills.

“It’s always nice to get one up on the Aussies but this is just one game – there’s a fair few more to come. That’s the first one they’ve lost and you can never count them out.”

Meanwhile, three wickets in nine balls from Anisa Mohammed steered West Indies to its maiden victory at the ICC Women’s World Cup with a 47-run triumph over Sri Lanka.

Posting its highest total of the tournament so far, West Indies saw the majority of its runs come in the middle order, Aguilleira’s 46 not out the highlight of the innings.

But a masterclass with the ball from Anisa Mohammed heavily contributed to Sri Lanka’s fifth consecutive defeat as both teams are now unable to reach the semi-finals.

“I said to the girls before that I was going to get three wickets today,” said Mohammed.

“It’s good to see the spinners coming to the party. We have a lot in our team and they really stepped up today.”

Despite a strong start with 12 runs in the opening over, Hayley Matthews was the first West Indies casualty at the crease, before her captain followed after being caught behind.

Kycia Knight and Deandra Dottin were both trapped leg-before wicket, the latter having made an explosive 38 from 25 balls.

The West Indies looked to be rebuilding with Aguilleira and Kyshona Knight in the middle, before the latter was dispatched to start a lower-order collapse.

Just two balls after hitting her 1,000th ODI run, Shanel Daley was the first of three quick-fire wickets as Sri Lanka increased the pressure on its opponents at the end of the innings.

A slow start in response saw Sri Lanka lose its openers within the first six overs, and after a lengthy lull in play, Mohammed sparked life into the match with two wickets in two balls.