As forecast in the Leader Newspaper last Monday Dámaso Aparicio was victorious in the Presidential elections for the Orihuela Partido Popular in a close run contest that, from the 1037 votes cast, saw him beat Victor Valverde into 2nd place by a margin of just 41 votes.

Aparicio has been serving as acting president since taking office in 2015 following the expulsion from the party of Pepa Ferrando. The PPCV president, Isabel Bonig, was one of the first to congratulate the new president on his victory assuring him of her unanimous support at a regional level. 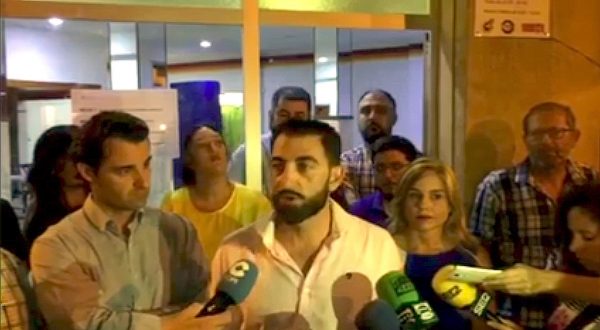 On addressing the press, Aparicio said that “I will call the other two candidates to join me on the executive so that, together, we can ensure yet another PP victory in the Municipal elections in 2 years’ time.

The new president stressed that he would extend a hand of cooperation and friendship to all, “including the mayor of Orihuela, Emilio Bascuñana,” although these words were in stark contrast to what was said immediately he was proclaimed president.

It was common knowledge that Mayor Bascuñana had supported Víctor Valverde in the contest, recently giving him more power in the Orihuela government team to the detriment of Aparicio himself. But it was Aparicio who had the last laugh and despite the olive branch offered to the mayor by the new President, the open war in the Party is likely to continue for some time to come.

Oriolana Eva Ortiz, Secretary General of the PPCV, said that she was absolutely delighted to see such a large number of voters who came forward to exercise their right to vote in the Presidential election.  However, with voters representing little more than 10% of the 7,000 members of the party, her enthusiasm might seem a little inapt.

According to party sources, in the three days running up to the election more than 300 supporters paid their membership fee. Unfortunately, when many turned up to vote, as they failed to appear on the list of members, this led to a certain amount of confusion. Fortunately everything was eventually resolved and they were able to cast their vote for their chosen candidate.

Province of Alicante now at medium risk as incidence of virus drops to 125.77