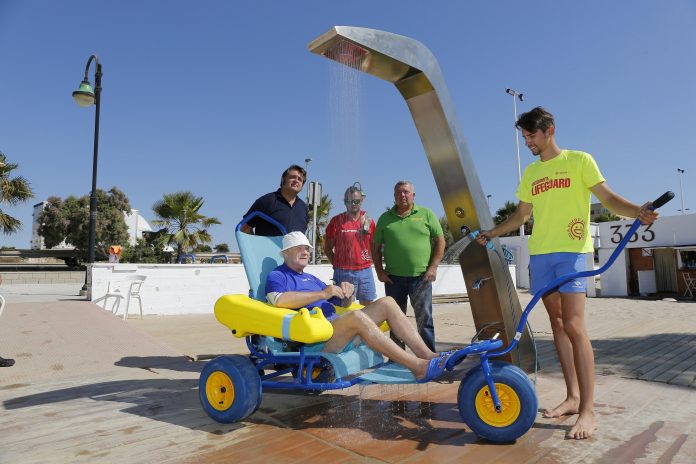 The Councillor for Beaches, Javier Manzanares, demonstrated a shower unit on Thursday that allows people with reduced mobility to wash themselves after spending a relaxing day on the beach. They can use the unit either in wheelchairs or in a specially adapted amphibious chair that is available at the beach first aid post.

The shower unit has been developed by Recreativos Acuáticos Horadada and has been installed at Los Náufragos Beach in Torrevieja where it will be evaluated during the summer season.

In showing off the resource Manzanares said that it was “unique on the beaches of the Valencian Community.” He then announced the intention of the council to install them on the remainder of the beaches in the town. 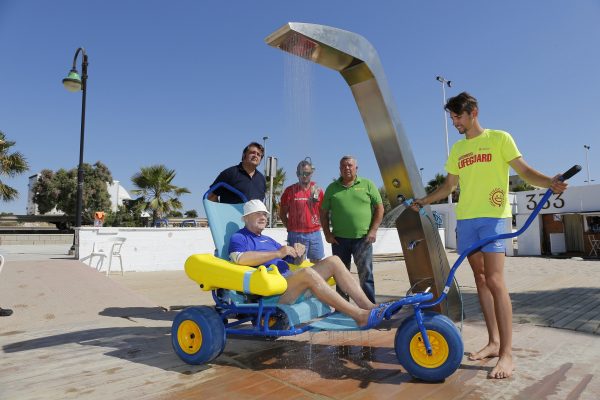 The shower unit, which has been placed in Los Náufragos Beach, is a unique component that has been added at the end of the concrete walkways that go down to the sea and which were also recently established in San Roque, Los Náufragos, El Cura and Los Locos, so as to make all torrevejenses beaches accessible.

Víctor González, manager of Recreativos Acuáticos Horadada, explained that the shower was developed by the company in cooperation with a number of different and in collaboration with municipal technicians. The prototype had cost about 30,000 euros to develop with any future units costing in the region of 5,000 euros each.

Marcos García, coordinator of beaches for UTE Salvamar, said that the adapted bathing service began on 1 July, with the loan of amphibious chairs. Anyone who needs this service can call 647 599 624 so that the assisted vehicle picks them up and takes them to one of the three beaches where the service is provided where a dedicated lifeguard will be in their company at all times.

Historical Habanera brought to a close in Torrevieja

Moncayo market, Guardamar, back in swing