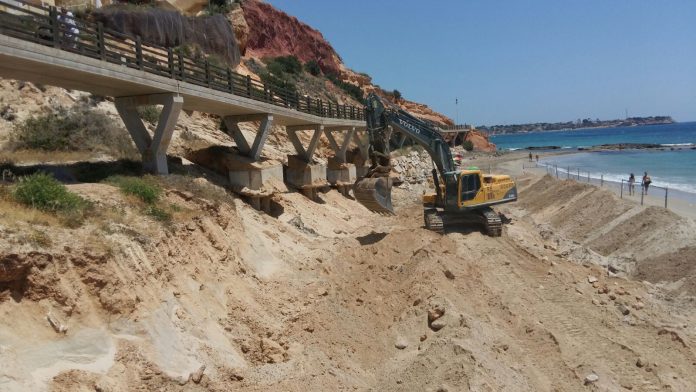 Anyone driving around the Campoamor area cant but fail to notice the maintenance and refurbishment that has been going on around Campoamor and Playa de la Glea, where a stretch of the seafront road, Avda de las Adelfas, has been resurfaced and yellow lined as well as the area a little further along, around the Restaurante Montepiedra.

Residents say that the improvements are long overdue and the fact that they have been carried out only a matter of months after the appointment of councillor Luisa Boné is no coincidence. Since her arrival as Councillor for Beaches she has worked tirelessly to ensure that promises have been kept.

Boné was also on hand last week to explain the work that is being carried out to the pedestrian walkway located to the north of La Glea brach.

She said that due to the severe weather suffered in the municipality in December and January, and the damage suffered as a result of torrential rains and strong waves, a report was carried out assessing the damage to the walkway as a result of which a file was processed to repair the foundation of thefootbridge.

The work consists of overhauling the foundations and the reconstruction of the protection barrier that had collapsed in Playa de la Glea.

She said that the council has only recently received the approval of the Provincial Coastal service to carry out the work but that it is now well in hand at a cost of 35,991.74 euros and that it is expected to be completed in a couple of weeks.