After two full weeks the 2017 Línea Directa Spanish National Bowls Championship reached its’ conclusion on Saturday evening. During the fortnight of competition we witnessed some great bowling and a number of very close games and the finals certainly didn’t disappoint.

In the Mixed Triples the San Miguel team of Noel Davis, Gail and  Fred Willshire played against last year’s Champions, Grace, Robert and  Graham Cathcart of Teide, Tenerife. The San Miguel trio were on top form and took the title after only 17 ends. 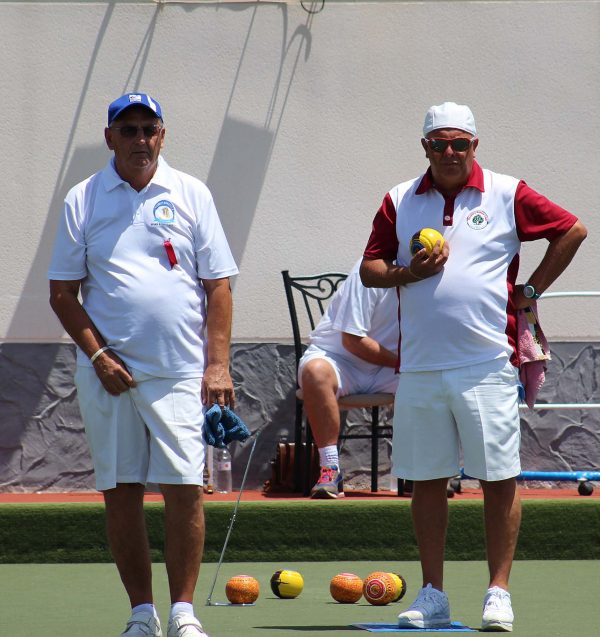 The Mixed Pairs saw 2 non-local teams. Mother and son, Grace and Graham Cathcart of Teide taking on David Sewell and Jan Dando of Indalo. This final produce some superb bowling and with the Teide pairing needing 4 shots on the last end to force an extra end Graham killed the off the end. In the replayed leg David put in a great bowl so that the 4 wasn’t possible as the Indalo pair took the Mixed Pairs title.

The Ladies Pairs was once again a San Miguel/Quesada affair. Peta Rhodes and Carol Broomfield (last year’s losing finalists) were looking to go one better, while Gail Willshire and Lynn Greenland were attempting to retain the title for San Miguel, won last year by club mates Lin Miller and  Chris Parsons. The game was very close and produced some great shots but it was the Gail and Lynn who took the trophy back to San Miguel.

The Men’s Pairs had one of last year’s Champions, Paul Parkes, playing with new partner Pat Heaney representing the Emerald Isle, against the popular father and son pairing of Gary and Johnny Raby of San Miguel. All four played great bowls. The game went down to the wire but Gary and Johnny took the honours.

The final of the Men’s Singles was the best Singles final in a major competition that I have seen in a long time. Brian Robertson of Mazarron against John Rimmer of Country Bowls. John started in top form building up a match winning 11-0 lead, however Brian pegged back to trail by just 2 shots at 14-12. John then picked up a 4 on the next end. A single to Brian followed by a 2 to John and the score stood at 20-14. John only needed a single shot to claim the title. As we all know that last shot is quite often the hardest to get and so it proved with Brian winning the remaining 4 ends to narrowly become Men’s Singles Champion 2017.

Following the finals Bob Donnelly (National Director) thanked all the sponsors, the co-ordinators, umpires, markers and scoreboard flippers. He gave special thanks to the Championship committee for their work before and during the event. Thanks also were given to both venues who gave up their greens free of charge. The Greenlands co-ordinators were then presented with a bottle of their “tipple” as a token of thanks.

During the competition the free raffle for the Linea Directa hamper drew a healthy entry, the only stipulation was that the winner had to be in attendance at the presentation in order to claim the prize. After 7 attempts a name was eventually pulled out and Allen Bowen, San Luis, was able to claim his prize.

Samantha Biddles of QuirónSalud presented a plaque and a 400€ voucher for a private health check to ‘Personality of the Tournament.’ The recipient of this award is chosen by the Championship committee and this year they voted unanimously for Gary Raby. Gary, who always wears his heart on his sleeve showed immense energy and enthusiasm throughout and was a popular choice with spectators too.

The final presentation was made by Bob Donnelly to Competition Secretary Suzi Cooper for all her hard work.

Following on from the Presentations everyone enjoyed a sumptuous buffet provided by The Club Quesada.