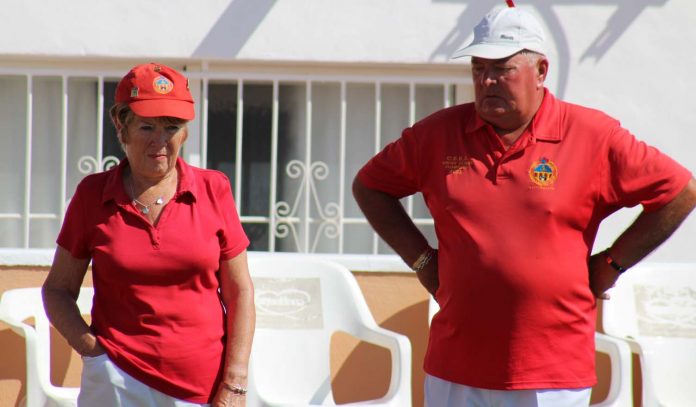 The Earls played at Country Bowls on Wed in VCL game and the home team were the winners by 10=4,,but Emerald Isle took the aggregate 101=100,winners for E,I  E Morris B Doran B Eldred J Mullarkey 31=10

The Gladiators were in action again on Friday, making the trip to Montemar a very rewarding one, the torreadors had a bad day at the office and so the final scores on the doors were – total shots for 112.  against – 71.  Points for  – 12. against –  2 . winning rinks were – ….Joan Oliver, Ronnie Stansfield Sue Brown. 22 shots to 7.  Sandra Jones, Margaret Dewar, Dave Dudding. 19 shots to 11.   Phil Lockley, Mary Lockley, Kim Hunter. 18 shots to 9.  Jean Thompson, Sheila Stead, Dave Thompson. 16 shots to 12.  Dave Field, Jean Giddings, Jim Oliver 22 shots to 14. Well done, an excellent result.

For all enquiries about joining Greenlands Bowls Club, please telephone Haley on 966844399.

The Pilots flew away to the Emerald Isle to play the Vulcans and came back with another good win of 10-4.  Four winning rinks plus the overall shots.  Barry and Margaret Sadler and Mo Kidd in fine form 22-8 so were Sue Daniels, John Rae and Anne Stone 25-12.  Terry and Jean Perchard along with Lorita Rae 17-12 and with the same difference John Morgan, Tom Spencer and Gina Hindle 16-11.

La Marina and the VCL aren’t very compatible at the moment as we went to San Miguel and got rather harshly beaten again.  This time 12-2.  Our only winning rink came from Dave Taylor, John Rae, Carol Smith and Mo Taylor.  Mo had a great game and rumour has it that Dave was so pleased that a trip to some dress shops is on the cards.

The Pilots had their second game on Friday where they played the Quesada Lancasters away and got bombed off the green losing 10-4 although the overall shots was only a measly six shots. Len Daniels, Steve Hindle and Dave O’Sullivan won 17-10 while our top winning trip was John Morgan, Tom Spencer and Gina Hindle.

Not such a good week for the Wasps in the South Alicante League,Spitfire Division, with two defeats.On Monday a 14 points to nil reverse at home to Vistabella Fairways by 124 shots to 81.Two rinks put up creditable performances with Beryl Styring with Mike and Florence Edwards losing by a single shot 14-15 whilst Irene Laverick,Ramsey Sinclair and Alex Morrice went down by 18 shots to 20.

On Friday the Wasps travelled to San Miguel Moors and faired slightly better picking up 4 points to their opponents 10.The overall shots being 94 to 112.The winning rinks for the Wasps were Beryl Styring with Mike and Florence Edwards winning by 21 shots to 10 whilst Pat Moore, Norman Adcroft and Irene Mangan gained a comfortable 25 shot to 13 win.

The Hornets in the South Alicante League,Harrier Division, continued their unbeaten winning run with a 10 points to 4 win at home to Horadada Hawks who themselves were high in the League.The overall shots which may prove vital at the end of the season were 110 to 94 in favour of the Hornets.

The winning rinks for the Hornets came from Jean James,Alan Ralph and Johnnie Ryder by 27shots to 11,Hilary Clarke,Trish Reilly and Vic Mahomet by 19 shots to 15 and by the narrowest of margins 15 shots to 14 from Penny Porter,Sid Gallup and John Clarke and by 20 shots to 19 by Wendy Ralph with Barbara and Jack Cooper.

Ladies pairs got through to the second round and then lost. The men’s singles lost on the first round, men’s singles lost in the quarter finals. The mixed trips lost in  the final against Finca Guila the team was Brian Zelin, Sue Kemp and Danny King. The mixed rinks got through to the finals which was played on Monday 24th April. The rinks team consisted of Roy Mercer, Jan Gatward, Geraldine and Gordon Fisher.

The opposition from San Louis was Steve Simmons, Keith Jones, Sabrina and Russell Marks. Monte Mar walked on water that day and kept San Louis off the score board until the tenth end. San Louis conceded the game after sixteen ends the score being 21 to Monte Mar – 11 to San Louis. A good eight days bowling and the weather was kind, some days a bit chilly but dry. Well done to all who took part,

Monte Mar entertained a visiting team from Chiltern Bowls Club. Six games of rinks were played on a warm and sunny day. Monte Mar did very well but results are not important, as everyone had a very enjoyable and friendly morning’s bowling. After the game we all had a lovely meal together in the Rincon Restaurant. The extra bonus for the visitors was that they won both raffle prizes.

On a lovely May Day there was some very good bowling by both teams. The Lancaster’s won on three rinks and the Toro’s won on two rinks and drew on one.

After a long lay off we played our second game in the VCL League against Greenlands Jasmines. It was a good result for Monte Mar winning on four rinks.

Not a good day for the Torro’s well beaten by the Gladiators, with the Torro’s winning on one rink. Well done to our winning rink of Harry Dobson, Mike Farrelly and skip Bill Young.

For further information about Monte Mar Bowls and Social Club check out our website www.montemarbowls.com or email us at info@montemarbowls.com. We are also on Facebook.

A busy week for all our teams; before the National Championships start next weekend.

We are currently looking for new members to join us for the 2017/18 winter season. We are aiming to enter an extra team in the leagues this year. With 4 teams there should be plenty of games for everyone. We welcome all bowlers, from the most experienced to those who want to step up from purely “social” bowling to the league challenge. We are a very competitive but friendly club and Casa Ventura itself is a hub for the local area, offering a wide range of non-bowling activities.

WASPS still on a Wednesday afternoon. Come along and try it out, bowlers of all abilities welcome woods, shoes and tuition all for 5 euros.

Come along for 1.30 and have a good afternoon bowling.