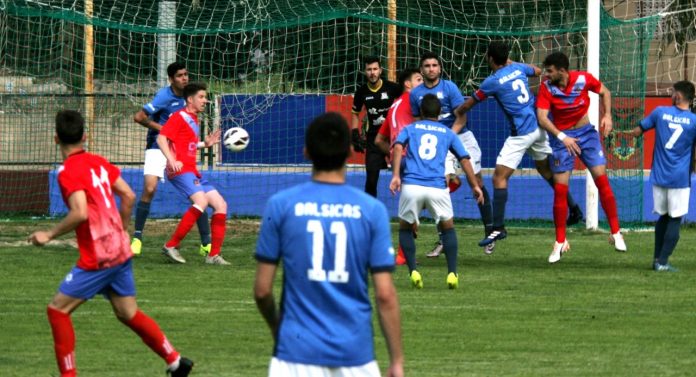 Mazarron took the lead as early as the third minute when Steven was brought down in the penalty area and captain Juan Andreo calmly stroked home the spot kick. Miguel then went close for Mazarron when he spotted the Balsicas keeper off his line but the ball was eventually scrambled clear.

Both teams played positive attacking football in an enjoyable first half but there was no addition to the score at half time despite a couple of hopeful penalty shouts by the visitors.

Balsicas had a long range effort at the start of the second half which was well saved by Juan Pedro in the Mazarron goal but, thereafter, it was all Mazarron. Chino increased Mazarron’s lead 5 minutes into the second half with an excellent chip over the keeper after a fine run. Then Raso hit a firm shot from distance which hit the bar before being cleared for a corner.

Boudia’s header from a long cross was turned over the bar but he made no mistake from the resulting corner when he fired the ball into the net for number three after 66 minutes.  As the game was about to restart a Baliscas player was sent off, presumably for dissent.

It was 4-0 just five minutes later when substitute Cesar was on hand to turn the ball home after Raul Torrano’s shot had rebounded back off the post.  Balsicas picked up a flurry of red cards as they struggled to cope with Mazarron’s attack and the home team made it five after 85 minutes. Raso made a surging run out of defence and found Dani whose selfless cross was fired home by Raul.

The win took Mazarron to within a point of the play-off and with another home game against already relegated CD Lumbreras next Sunday, kick off 5.30 pm, there is still plenty to play for.

Man of the Match:  Steven