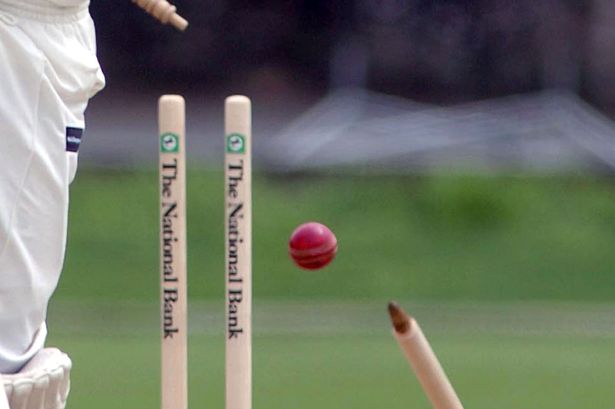 The Cryptics final game of their Alfaz tour saw them looking for the clean sweep as they arrived fresh on Sunday morning having won two close matches already on tour.

Their serious approach to the game was in evidence right from the start as they decided to partake in an actual toss and won it, inviting the home side to set a target and the Perman pair of Mark and Jack strode out to try and set things in motion.

Things started well for the home side, Jack in particular taking a fancy to the Cryptics bowling following on from his well struck 70odd from Friday but in the 5th Over, Hodgson was able to make the breakthrough, Mark Perman chipping one to mid-off and Alfas were 20/1 off 5.

Fletcher, the Centurion from last week, was next in and with Jack Perman, saw off the opening bowlers, including a nice tidy spell from an up and coming talent in the guise of B. Armstrong. Both batsmen played sensibly and Perman hit his 50 off 36 deliveries.

However, in the 16th Over, Perman finally fell with the score on 94, Hutchinson getting him to offer a chance which was well caught. Out for 56 including 2 6’s and 7 4’s.

Abdul was next in and next out, after a couple of boundaries, M. Ward got one to rear up and Abdul got a slight nick on it as it passed his head giving the ‘keeper a nice catch, 109/3 and the Alfas mini collapse was looming.

Next in was a new face for Alfas, Harry Walsh making his debut with some nice technical defensive play. However, after connecting nicely with one, he forgot to check where it had gone and let the visitors run him out just short of his ground, 112/4.

Byrne joined Fletcher for a bit but the Vice Captain followed the downfall of his Captain, chipping one to Mid Off and in the same over, Ahmed came and went, hitting one straight up in the air for the ‘keeper to gather easily, a bad over for the home side 124/6.

Briggs joined Fletcher and together they were able to stem the loss of wickets for a while. Fletcher went through to his 50 off 51 balls as the pair put on 36 together before Fletcher (76), looking to get a move on was clean bowled by young Armstrong, back on for a 2nd spell. 160/7.

Braitwaite joined Briggs and they added another 28 before Briggs called for a languid, sedate single but it was too quick for Braitwaite who was run out at the non-striker’s end.

Dhondai came in for the last ball of the 39th over and then Roper was in for the 40th Over, Dhondai clean bowled by Ward looking to power up the Golden Duck tables!

In the end, Alfas saw out the overs and posted 188, not quite the score they were looking for when 111 at drinks but a fine bowling display from the visitors fighting back after drinks.

Thompson and Armstrong came out after tea to start the chase, and start it they did! Both batsmen were able to see off the opening bowlers without problems and bring the team to 75 before Alfas finally made the breakthrough.

Continuing his renaissance as a bowler, Fletcher was able to break the partnership in his 2nd over when he lured Armstrong into a rash shot that just went high and not too far, allowing Fletcher to stabilise himself under it and take the C&B.

And Fletcher was at it again 2 overs later, again with the last ball of the over, getting the other opener Thompson to pick out J. Perman on the deep Cow boundary who took the catch to prevent the ball going for 6. 92/2

Young Firth joined Hardy at the crease and together they put on another 40 but at a more sedate pace before Firth, off the bowling of J. Perman, picked out Braitwaite at point and was next to go for 7.

That brought the other young bowler to the crease, Armstrong, and he got to see Hardy fall for a good 36 as Perman claimed another wicket, Byrne taking a faint edge behind the stumps and the match was swinging back to a contest. 145/4

The Alfas new boy Walsh was given the chance to turn his arm over but facing a fellow Leg Spinner at the other end in new man Hutchinson gave him a rough start but he plugged away for 4 solid overs with some nice turn on display.

The introduction of Dhondai was too much for young Armstrong though as the ball was given more flight than the plane taking him home and he was only able to pop one up to Braitwaite, the “seasoned” campaigner not taking it easy on the younger players. 168/5 with 5 overs to go and 21 needed.

Hutchinson followed Armstrong back to the pavilion in Dhondai’s next over. With the sun starting to fall in the sky, Hutchinson hooked one to the Leg Side boundary only to see the giant frame of Fletcher, framed in a corona of light, take the catch safely, 179/6 with 2 overs to go.

Ahmed kept things tight in the penultimate over and it came down to the last over, Dhondai bowling, 4 runs needed to win. After a couple of singles, Dhondai struck again, his 3rd wicket in 3 overs, M. Ward hitting one up that Byrne was able to scramble forward and take around the middle of the crease. 2 balls to go, 2 runs to win…and the next ball C. Ward hit and the batsmen took off for 2, however, with the game finely poised for the last ball, an Alfas fielder panicked and went for a non-existent run out chance from 2 feet away from the stumps and the batsmen came back for an overthrow and the game was one with 1 ball to spare.

A great game of cricket with some talented young cricketers on both sides showing the game is open to all ages. A fine tour by the Cryptics who Alfas hope to see back in a couple of years depending on their touring commitments.

Next weekend see Ruddington CC come over for matches on Saturday and Sunday, any and all are welcome to come by and enjoy some fine weather, fine drink, fine food and cricket! The facilities open from Noon and the matches start at 13:00.

What now for the Milwaukee Bucks?