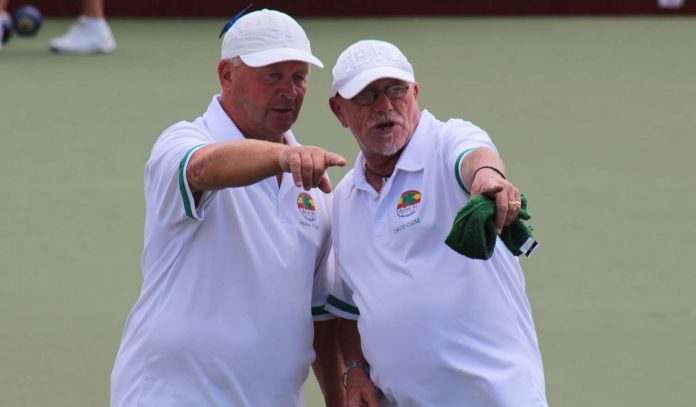 With the start of the SAL this week, we warmed up with a match against the touring team from Antrim Lawn Bowls Club, who we entertain each year at this time, as do several other clubs. We always have great fun, they being an extremely social group; we played 4 rinks of fours and had a great mornings bowls, with both teams taking 2 rinks, though the score hardly matters.

On Friday we played our opening league match at La Siesta against the Hornets, they are also a great fun team to play and it was a close match, all round. In the end the Hornets took advantage of the home mat and took the rinks by 4 to 2, though most could easily have gone either way, but we did have a splendid morning, in great company, what more can one ask. Marion Haynes, Dave Haynes and David Whitworth 14-19.

Wed saw the Emerald Isle travel up to BBC in the Winter League, and home advantage won the day with a 10-2 home win aggregate100-61, winners for EI M Highland P Kelly M Thomas S Westall 17-11. The home team won the Berleen as well by 19-12

Friday saw the departure from the Emerald Isle of two of our members returning to Geordie land, namely Frank Close and Yvonne Mallerburn. No doubt the pair will be missed in the club and around the bowls circuit.

Frank in his stay at EI established himself as one of the top bowlers in Spain, winning several titles, and many  in house competitions. Yvonne started her bowling career in EI and became a very capable bowler.

Personally I will miss the sessions we had not always on the green!

La Siesta commenced their VCL campaign with an 8-6 away win against Greenlands Jasmin. Irene Mangan our recently crowned Ladies Singles champion kept up her impressive form with a 21-16 win against Sue Brown whilst the other winners were Dawn Taylor and Pat Harman in the Pairs by 25-10, Joy and Brian Gardiner with Jean Cooper in the Triples winning 19-11 and our Rinks four of Dave Davies, Trish Riley, Harold Charleton and Mike Edwards winning 20-10. With a narrow loss on the overall shots by 93 -102 La Siesta picked up 8 points to their opponents 6.

The Winter League season ended with 3 matches to report on. Against Benitachell at home La Siesta lost 10-2 with the winning rink being that of Trish and Pat Reilly with Florence and Mike Edwards by a score of 17-11.The match result the overall shots difference was 57 to 99.Against San Luis away a similar result with a 10-2 defeat the winning rink being Dawn and John Taylor with Irene Laverick and Pat Harman by 22-7.

The overall match shots being 62-95. The final match of the season at home to El Cid was an 8-4 loss with the winning rinks being Trish and Pat Reilly with Florence and Mike Edwards by 22-18 and an excellent win by Dawn and John Taylor with Pat and Brian Harman by 21-11.The overall shots difference in the match being 82-94. The Winter League team endured a difficult season but thanks goes to all those that took part especially those that came in often at short notice and to captain Pat Harman for managing to always ensure that La Siesta had a full team for every match.

Trophy Presentation night took place at one of our sponsors Carmens Restaurant and there was a good turnout on the evening. Etched glasses were given as mementoes to the winners and runners up and were beautifully etched with our club logo by Bespoke who are based at Zoco Market.

Good start for both our teams in the South Alicante Summer Leagues. The Wasps in the Spitfire Division travelled to Emerald Isle and came away with an 8 points to 6 victory. Dawn and John Taylor  and Harold Charleton were never in any danger winning 20-13 whilst Jo Elkin with George Richardson and Brian Fraser won 19-10.Ramsay Sinclair, Irene Mangan and and Alex Morrice went into last end all square and managed to pick up 2 on the final end to claim victory. Joy Gardiner with Bill and Sue Jordan needed to have 2nd wood on the last end  to win this extremely close game and this is  just what they did by 15-14.Thank you  to Dave Laverick, who came as our travelling sub. The overall shots were lost by 105 to 88.

Saturday we played the Dot Careless Group from Cambridgeshire and a great crowd they were. Lots of fun was had and some good bowling as well. Like many touring teams they struggled to come to terms with the carpet as they are nothing like their grass or indoor carpets and a strong wind didn’t help either side. Nevertheless we managed to win on all rinks which was a nice way to end the Touring Team season.  Many thanks to Terry Perchard for organising them and hopefully we can a have good share next year.

For the last Winter League game we travelled to Bonalba with great hope finishing the season with a win.  Oh dear we were well and truly beaten 11-1.  Everyone had some sort of excuse, all the usual ones, couldn’t find the weight, couldn’t find the line, the Skip kept bringing me the wrong hand, I wish I hadn’t drunk so much last night.  Let’s face it most of us were pretty useless except Shirley Hadaway and Co who fought to a great draw.  The Co being Phil Pape, Angie Butler and Ann Stone. It wouldn’t be very nice to pick out our Champion of Wrong Biases but she did do it again playing with Shirley didn’t you Enna.  Once again the Berleen did well and won 19-9 captained by the legendary Alex Whyte with a slightly different four this week of Jim Freeman, Roger Stacey and Margaret McLaughlin.

Thanks for a good season, for backing our Captain, Dave Hadaway, to all the folk who played in the team and to all those who turned out when the team was short.  Last one and less than 300 words.

The Winter League team were at home for the penultimate match v San Luis. They had three winning rinks with the long game being nip & tuck, eventually going our way. Winning teams were Sandra Burrows, Barbara Brown, Mike Regan & Gary Thorpe 27-13. Jenny Bowman, Martin Foulcer, Barry Norris & Eric Bishop 18-13 and Olwyn Ratcliffe, Stuart Allman, Brian Dunne & Ian Kenyon 17-13. VB 80(8) – 78(4) SL. San Luis won the Berleen. Sitting nicely but not comfortably at the top of the league table with the ultimate match next week at San Miguel, everything to play for, its a very close fight between three clubs and its not going to be easy, we can only try our best!