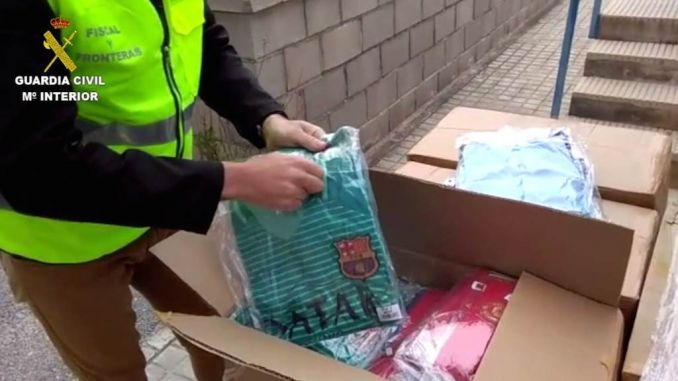 A 33 year old man of Moroccan nationality was arrested in Benijófar last week charged with the possession of a shipment of over 700 counterfeit football shirts. The clothing was valued on the open market at 25,000€.

The Civil Guard said that the shipments appear to have been coming into Alicante-Elche Airport for some time. Many have been tracked, the latest of which led to the arrest of the recipient.

The man is understood to work as a street vendor on a number of local markets. It is thought, however, that much of the current shipment was likely to be resold to other traders who would then have sold it on their market stalls in Torrevieja, Guardamar and Cabo Roig Markets.

Many of the shirts were replicas of major Spanish football clubs including Real Madrid, FC Barcelona, ​​Atletico Madrid, Valencia CF and Athletic de Bilbao, as well as European clubs  such as Manchester Unite

The detainee, who was charged with an offense against industrial property, was released on bail pending a court appearance.

Vocabulary of the Virus – David Aitken

You Can´t Be Serious – Being different does make a difference

How colour blindness can affect your job choices

You Can’t Be Serious – A timely Reminder …