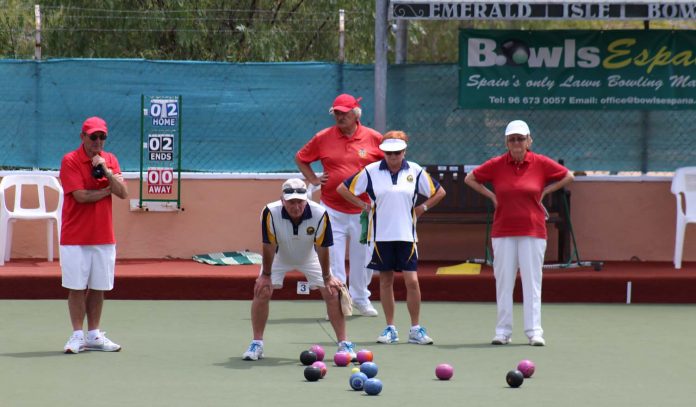 The Presentation Evening will take place at El Prado on Tuesday 25th April.  See notice board for menu or Janet Thomas for details.

The Winter League were away at Bonalba winning 10-2.  The losing team only lost by 1 point!!  The Berleen also won.  Well done all.

REMEMBER THE AGM on THURSDAY 6TH APRIL 0930 FOR 1000 START.  THERE WILL BE NO BOWLING UNTIL THE AGM FINISHES.

WASPS on Wednesdays at 1.30.  5 euro’s for an afternoons bowling, you can borrow woods and shoes for free, with free tuition if required.  Bowlers of all abilities welcome.  No dress code.

We are about to begin the South Alicante Summer League season on 7th  but there is still the matter of the Winter League to complete, with 2 matches this week. Wednesday 29th Winter League home to Javea Green; there was some excellent bowling in a really close fought game. Ultimately we managed to win 2 rinks and hung on to win the overall shots 77-76 for 6 points -6. Winners: Lynne Morris, Jo Pering, June & Keith Jones 17-15, Irene Everett, Vic Slater, Peter McEneany, Tom Hill 21-9.

The Berleen team of Margaret Morrison, Pam Lockett, Charlie Marigold, Barry Edwards had a great win 25-11. The second Winter League match of the week on Friday 31st was home against our near neighbours; La Siesta. After a cloudy start it turned out to be a good morning all round; warm, sunny and a great result 10pts-2, shots 95-62.

On Monday 27th we had the great pleasure of hosting another touring team; Barwell IBC. It was a friendly game, with good company enjoyed by the players. Although immaterial, San Luis won 4 games -3.

Following our AGM on 30th March, we have a new committee.

Two Winter League matches this week and two different results especially for the two Barry’s. On Wednesday we travelled up the motorway to Finca Guila where some of us met old friends and some made new ones. We won by three rinks to two with Colin Armitage, Mike Stone, Mo Kidd and Lynn Armitage winning 17-14.  Then there were the Hadaways who both won. Shirley’s four were the winners by 28-14 and she was helped by Phil Pape, Alex Whyte and Ann Stone while the girls once again carried their Captain and leader Dave to the fine score of 25-8. So well done Jean Perchard, Barbara Forshaw and Janet Parsons. Now come the two Barry’s both claiming they won the extra two points on the last end to give us the overall shots and an 8-4 win.  Both rinks got “stuffed “ but Barry Sadler, Peter Parsons, Mike Smith and Margaret Sadler claim their three shots on the last end won it while Barry Latham, Terry Perchard, Wendy Latham and Carol Smith say that cutting down the three against to one on their last end was the winner. As I am writing this you might guess we did it.

So on to Friday when the League Leaders Vistabella came, we were hoping to do the same to them as we did to Quesada but it was not to be. They won on three rinks plus the overall shots but by only eight.  They won 8-4.  The shining lights were the two Barry’s and, of course, their fellow bowlers.   Barry Sadler, Peter Parsons, Margaret Sadler and Mo Taylor won 21-19 and the Scribe won 17-8 with help from Dave Taylor who had a great game plus Wendy Latham and Kathy Manning.    Another little argument was did the number of wrong biases mess our shot difference up. Unfortunately nobody wanted to tell me who the miscreants were.

Once again the Berleen lead by Alex Whyte with Jim Freeman, Angie Butler and Martin Butler had a fine 21-12 win.

Our annual competition of Captain’s team (Ronnie Cairns) vs Chairman’s team (Chris Harding) took place on Sunday 26th March. The Captain’s team won the trophy this year, the highest scoring team of Jan Soars, Jan Gatward and Brian Zelin also received medals. After the game everyone sat and enjoyed a drink plus an excellent buffet which was provided by the club and prepared by Liz Melville, Babs Farrelly and their helpers Val Hyman and Audrey King. Well done ladies.

In the Winter league on 22nd March we were at home to La Siesta.After a very competitive game played with good humour and sportsmanship the final scores on the doors were – total shots for – 96.  Against – 81. Points for – 8. Against 4. Winning rinks  —- Margaret Dewar, Jean Giddings, John O brien, Marilyn Fryatt. – 21 to 17.  Sandra Jones, Doreen Watt, Dave Thompson, Graham Watt – 17 – 8.  Sheila Stead, Jean Thompson, Kim Hunter, Mel Brown – 32 – 12. On the 29th March in the Winter League we made the long trek up north to El Cid Bowls club. Final scores after a very close game were as follows…………Total shots for – 81.  against – 87.  Points for – 4. against – 8.  Winning rinks were – Margaret Dewar, Jean Giddings, John OBrien, skip Sue Brown. – 15 shots to 14.  Sheila Stead, Jean Thompson, Val Duchart, Skip Mike Kelly. – 17 shots to 13. On Friday a re-arranged winter league match against Quesada was played at home and proved to be a very tight game. So after a very competitive game played in the right spirit the final results were as follows……………. Total Shots For – 79. Against – 102.  Points for – 2. Against – 10. Winning rink was – Sheila Stead, Jean Thompson, Kim Hunter, skip Mike Kelly. – 22 shots to 15. Well played everyone. Greenlands Bowls Club would love to welcome new bowlers to the club and to facilitate that on Saturday mornings we have a fun morning of bowls where people new to the game can participate in a relaxed and friendly atmosphere with prizes on offer. Please Telephone Haley on 966844399 for all enquiries.

The winter game took place on Wed at Monte Mar,and the E,I came away with a good win 7=5 aggregate 75=69,,winning rinks

Thursday saw the VCL game by the Dukes playing at Monte Mar Lords,,and they come away with a 10=4 win aggregate of 108=79,,winners where

The E.I entertained the RBL on Thursday afternoon and the result was a home win by 9=5 aggregate of 106=80,,the largest trip win was by K Griffiths R Adams and T Kelly by 31=8

We continue to have our very popular SAPS taking place on Sat great value 5 Euros gets you 2 hours of bowling,, tuition ,,if need bowls and shoes included smashing way to spend in the lovely weather