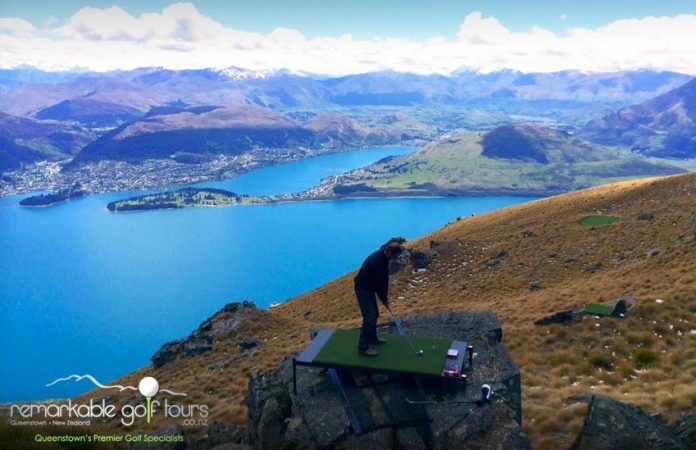 A RIVAL TO THE EXTREME 19th at Safari Resort S. Africa: the par 3 Cecil Peak, Queenstown, New Zealand. 4,500ft above sea level, and a green, if you can spot it, 1,476ft below.   Once the helicopter has dropped you on the top you have 5 balls and two tee selections, the only other thing needed is a good head for heights.

SIX OF THE LAST 13 winners of the Masters (three of them Phil Mickelson) have been left handed.  Apparently if you naturally hit a draw you have more success at Augusta, because several holes require right-to-left tee shots. Draws feature more topspin than fades, making them harder to control.   Lefties can hit a cut where right-handed players have to hit a draw, although the way Mickelson played when he won his three Masters, it probably wouldn’t have mattered which hand he used.

I WONDER WHAT the Muirfield gentlemen who grudgingly admitted lady members would have made of Joyce Wethered.   Sister of notable golfer and Walker Cup captain Roger, Joyce won the 1920 English Ladies Championship while still a teenager.  In nine years she won five consecutive English Amateur and four British Ladies titles.  Her forte was accuracy and power; she once shot 75 at St. Andrews with her hickory clubs against a stiff wind, off the back tees.

Four years after retiring, (age 24) Joyce came back to beat America’s darling Glenna Colett in the 1929 Womens Amateur Open at St. Andrews 3 & 1. Touring America, playing with the likes of Sarazen and Jones she was feted everywhere.  Bobby Jones wrote of her: “I have not played golf with anyone, man or woman, amateur or professional, who made me feel so utterly outclassed.”   You can see archive film of Joyce’s swing on youtube. Muirfield members take note, the world’s best swinger wore buckled heels and a cloche hat.

AS McILROY RECOVERS from stress fractures Henrik Stenson says the strain caused by the violent modern swing is causing more injuries.  Justin Rose, Jason Day and Stenson himself have all suffered recently.  Henrik says: “Young players could keep playing for years if they used the swinging action of Bobby Jones.”  (Or Joyce Wethered.)

Arnold Palmer’s favourite tipple consisted of brandy, crème de cacao, Ketel One premium vodka and Haagen-Dazs ice cream, and was called a Hummer.   Jason Day tried one and couldn’t remember what he said in an interview afterwards.

CANADA’S ADAM HADWIN intended to spend Masters week on honeymoon after his wedding in April to fiancée Jessica Kippenburger, but after winning the Valspar Championship and qualifying for Augusta, the Tahiti honeymoon is postponed.  “I’ll try to get my deposit back, but if not, too bad,” says Hadwin, “I just want that trip down Magnolia Lane.”   Let’s hope Miss Kippenburger agrees with him.

BECAUSE OF LONG HITTERS, golf courses need to be perpetually lengthened.  Perhaps variable-distance balls could help. USGA’s Mike Davis says: “No other sport has allowed equipment to dictate so much change. The Myopia Hunt Club in northern Massachusetts, for instance, has not hosted the U.S. Open since 1908.  It measures less than 6,600 yards.  If Dustin Johnson had an 80% golf ball he could play from the back tees on this historic golf course that he really can’t play anymore.  An amateur with a 100% ball would have a chance of beating a pro with an 80% ball off the same tees.”  Probably not Dustin Johnson though.

A LITTLE CHUCKLE:  Tim, an office employee of Doug’s, knew his boss was out of the office for the day, so he had the brilliant idea of transferring all telephone calls to his mobile and took it with him to play golf.

Doug, calling on the 6th hole, said: “How is everything going today?”

Trying to muffle the outside noises, Tim responded: “Everything’s fine, all under control, boss.”

“That’s great,” his boss replied. “Could you do me a favour?”