The Grand Finale has arrived, after an exciting year for Vivace Classical Choir! During the first ten years the choir has performed music covering three centuries. The choice of music has been taken from that composed by those portrayed on the front cover of their eye-catching poster – from Antonio Vivaldi’s “Gloria” written in 1715 clockwise to Sir Karl Jenkins “The Armed Man” first performed in 2000 – plus many others in between. 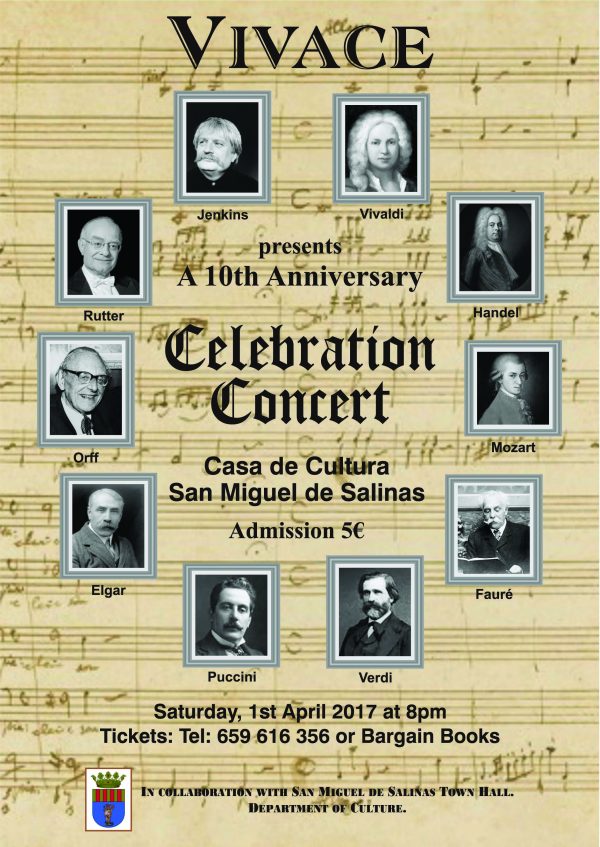 Musical Director Tom Pargeter says “To choose music representative of Vivace’s first ten years, to fill an hour long concert performance, is more difficult than one would at first think. The difficulty lies in the choice of which piece of splendid music should be discarded, rather than which to keep. I do hope that this celebratory programme contains some of your favourites, and that you enjoy the evening’s performance.”

This will be Tom’s final concert as Musical Director. After 10 years, he feels the time is right to hand over the baton. He will be greatly missed by the choir, but everyone involved is thoroughly enjoying revisiting the beautiful music and the wonderful memories it evokes.

There will be two performances. The first performance will be a charity performance  in La Siesta Church on Friday 31st March, starting at 7.30pm. Entrance is €6 to be paid on the door. Doors will open at 7.00pm.

From the very beginning, Vivace has been based in San Miguel de Salinas, so it is fitting that the final performance will be in the Casa de Cultura in San Miguel de Salinas on Saturday 1st April, starting at 8.00pm. Doors will open at 7.30pm. Tickets are €5, and can be obtained by telephoning Douglas Brown on 659616356.   Tickets can also be got from Bargain Books in San Miguel.

An evening not to be missed!

LET THE MUSIC BEGIN – FOR ALL!