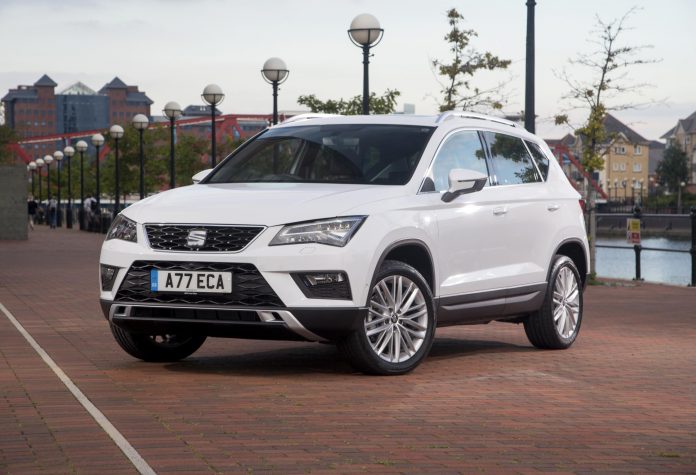 The SEAT Ateca has added another honour to its trophy cabinet, after being named Best Mid-size SUV at the 2017 Fleet News Awards, held at London’s Grosvenor House Hotel last night.

Recognising class-leaders from all corners of the fleet sector, the Fleet News Awards has become a key fixture for the industry and is now in its 29th year.

In a fiercely competitive category, the Ateca stood out against its rivals as the new SUV impressed with its striking design, raft of safety and connected technology features, plus its practicality for fleets.

As a standout performer in the category, the Ateca has been lauded for its affordability throughout the range for SMEs and larger businesses alike. With an entry-level P11D of just £17,935 a BiK of 20%, as well as class-leading residual values of up to 59% after three years/60,000 miles, it leads the segment in price, as well as performance.

Fleet News Judges commented: “Excellent value for money for fleets and drivers, the Ateca has a high quality interior, good range of diesel and petrol engines and attractive looks. SEAT has a winner in this category.”

Peter McDonald, SEAT UK Head of Fleet and Business Sales, commented on yet another win for the Ateca, saying: “Since its release in September, the Ateca has been a frontrunner in its segment, leading the way with its sharp design, comfort and pricing to revitalise the SUV market.

“With four years of consecutive growth in the fleet sector, our product and approach to business sales is delivering real results. Fleet initiatives like the four-day test drive scheme have resonated with the sector, and are built on an understanding of what businesses are looking for to help us deliver a leading fleet service.

“The Ateca demonstrates that approach perfectly, and to be named Best Mid-size SUV shows it has been a breath of fresh air to the industry.”

SEAT’s first entry into the SUV segment has won praise from all corners of the market since it was released in September, winning a string of awards, including ‘Best small SUV’ at the What Car? Car of the Year Awards.

With the Ateca taking the fleet sector by storm, the recent launch of the New Leon and the All-new Ibiza and Arona on the horizon, SEAT is experiencing its biggest ever product offensive which is providing businesses with more options than ever.

Fatality on AP-7 close to Torrevieja

Speeding car caught on CCTV rolls over at new roundabout