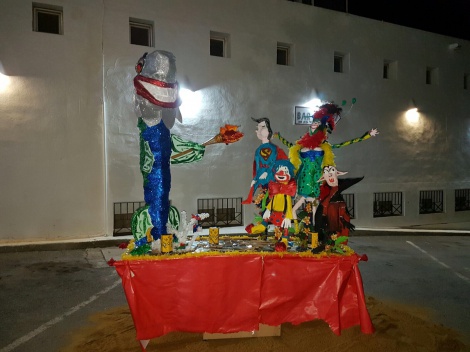 Mojácar re-enacted the Burial of the Sardine, carrying on the tradition that marks the end of the Carnival and the beginning of Lent.

For the first time, Mojácar re-enacted the battle between Don Carnal and Doña Cuaresma, a well-known allegory in the Libro del Buen Amor (Book of Good Love), written in 1330 by the Archpriest Hita.

Members of the carnival group, “Los Implicados”, represented the challenge and the subsequent defeat of Don Carnal in the face of such an austere rival, in the town’s Centro de Usos Múltiples.

The solemn burial of the sardine pageant was carried out after the battle at 8.00 pm, with several attendants who escorted the fish to its final destination.

The crowd of locals and visitors who accompanied the funeral procession emphasized the greater participation, every year, of the town’s non Spanish residents who enjoy getting involved with the local traditions.

Numerous ‘mourners’ accompanied the beloved sardine along its candlelit final farewell with litanies, pronounced by the burial “priest” and responded to with passionate sorrow by those present. Each and every Saint’s requests are relevant and to the point.

The Mojácar Municipal Band played all along the route, putting a final musical touch to the Carnival. This year, the Carnival has had an even bigger program of activities, with more people joining in than ever.

Finally, after the burning of the sardine, good heart-warming hot chocolate and churros were served to comfort the “mourners”, courtesy of the Town Council.