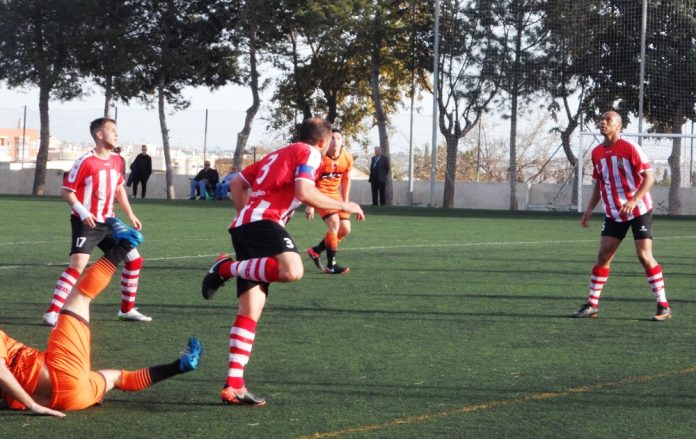 It has to be said that CD Montesinos are coming into the final part of the season on patchy form. This week they entertained a Sporting Orihuela side who were hammered last week against one of the top sides, (Benijofar) but who this week were unfortunate to leave “The Cauldron” at Montesinos with a defeat.

However, it is always said that a side that does not play well but still wins is a good side, so with that logic in place, CD Montesinos took all three points from a scrappy game in front of just over 200 loyal supporters.

Vazquinho opened the scoring after 18 minutes when he latched onto a through ball and his low shot comfortably beat the visiting keeper. However, the lead lasted just two minutes as Montesinos failed to clear the ball inside their own area allowing Sporting to equalise on 20 minutes.

Just before half time, centre half Joao headed home from a corner to send Montesinos into the break with a 2-1 lead and the home fans expected the flood gates to open, which was not the case.

The second half was more one sided as Montesinos tried but failed to increase their lead and even with a series of substitutions, the score line stayed the same until the closing minutes when on 40 minutes the unthinkable happened and the visitors equalised, this time with an own goal from Bashir who tried to head clear but the ball found its way into the net.

With time running out, CD Montesinos pushed forward looking for a winning goal and, on this occasion, fortune looked favourably on their efforts with a cracking goal after good play from Aure and Vaz who played in Alfredo to slot home the winner and keep his side in with a real shout of a top two finish.

With results elsewhere favourable to CD Montesinos, this latest win moves the club up into joint top position on the same points as Benijofar (35 points) but with a game less.

Next week-end will go a long way to deciding their season as they are away at Callosa, who are two points behind them but with a game in hand. A win at Callosa will go a long way to finishing in a top two position. The game is almost certainly going to be played on Saturday, 11th of March in Callosa and the club have asked as many supporters as possible to turn up for the boys. Time and date have yet to be announced so keep an eye on our website (www.cdmontesinos.com) or our facebook page (cdmontesinos) for further information.