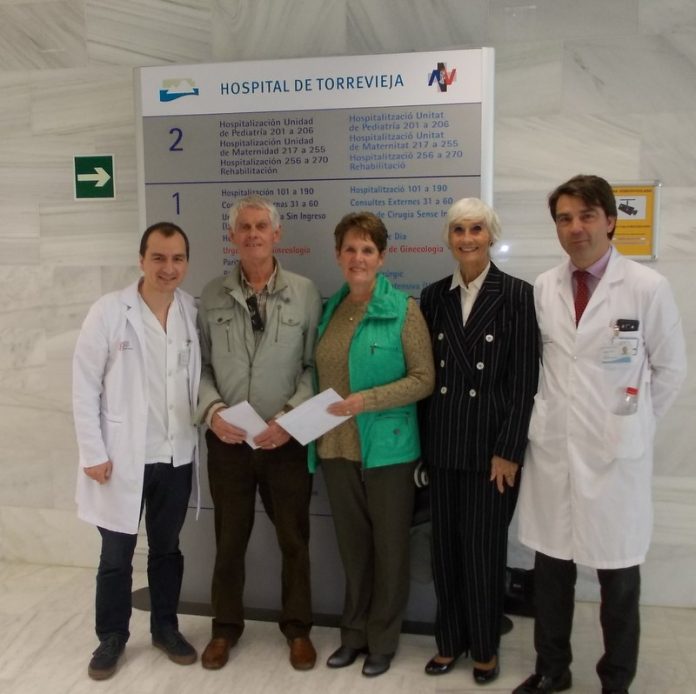 In memory of the much loved and admired Richard Vivian Jones, who sadly died in the Christmas week, of last year,2016, a donation of 580 euros was made to the, Departmento de Nuemologia of Hospital Torrevieja on Tuesday 21stFebruary.

This sum was made up from the monies collected at Viv’s Funeral, and a generous donation of 250 euro from “ The Torrevieja Barbershop Harmonizers” along with a donation of 100 euro from “The Deadwood Stage Company”

Viv husband of Judith, died after some weeks in Hospital of complicated breathing problems, namely Pulmonary Fibroses of the Lungs.

Viv and Jude moved to the Costa Brava 14 years ago were well known for their contribution in time and effort to many societies and charities.

He had been stage manager and an ardent back stage worker for several years for Campoverdy Teatro Groupo having an artistic flair and skill. This last year he transferred to the newly formed group “The Deadwood Stage Company”

Sadly his health deteriorated to such an extent that he was no longer fit to attend their meetings, but he will never be forgotten. He was a warm, quiet gentle man!

Another of his interests, apart from supporting Wales in Rugby, was a fine voice as a member of “The Torrevieja Barbershop Harmonizers”.

The photograph shows his wife Jude, presenting the donation to the director of the Hospital Jose David Zafrilla and Neumology Chief Gabriel Mediero together with Vida and photographer Colin Nelson of “The Deadwood Stage Company” and Geoff Gosben President/Chairman of the “Harmonizers”

The Hospital staff were somewhat overcome by the generous gesture as this was not a common occurrence.

Giving the gift of vision