Product placement and sponsorship works much better than ‘hard sell’ advertising, and many production companies use it as a way to boost their film budget. If you have a business or service in or near Torrevieja and you would like to see it in a movie, now is your chance.

Siesta Productions completed spy thriller The Cucaracha Club against all the odds, and now the film is waiting for release, you’d think writer Billie Anthony Gaddess and executive producer Clive Gray would be taking a well earned break, but that’s certainly not the case. The script for The Cucaracha Club 2I: The Route of All Evil is finished and set to go into production in the autumn of 2017.

Early reviews of The Cucaracha Club are favourable, and there’s a lot of interest, so the production team are keen to build on that success and make TCC2 even bigger and betterNobody involved had ever produced a full length feature film before, so it’s a testament to the dedication and ‘can-do’ attitude of the team that The Cucaracha Club got finished, and that the end result is such a quality product. Siesta Productions are now looking for sponsorship and product placement deals. Here’s a plot synopsis of TCC2 to help you decide if your business could benefit from an association with the film: 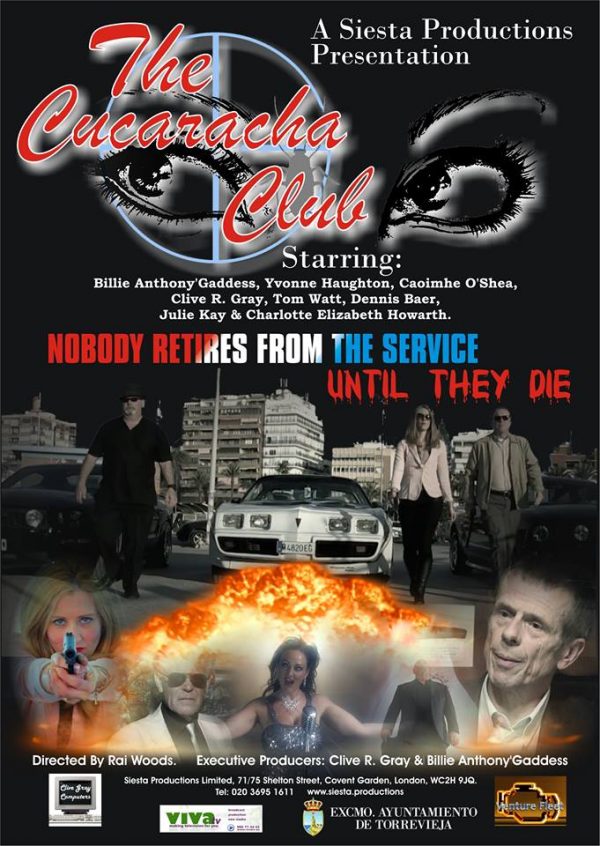 ‘British MI6 Agent, George, having been reactivated to full service status following a spell in retirement, is living in Torrevieja in Spain, knowing his past is likely to come back to haunt him one day. Suspected of being an unwilling double agent by former colleagues from MI6 and the CIA, George is about to have his world spin out of control again, as he struggles to clear his own mind and exorcise his inner demons.

In the mean time his friends and colleagues try to keep business going as usual, traveling all over Europe and turning every stone to complete dangerous missions. While a storm is brewing in the halls of power an unknown force is set to lock horns with George and his team, but who wants him dead?’

Like the first film, TCC2 will proudly showcase Torrevieja, so if your business is located in or near the town, it’s going to get a great boost from an on screen presence, and you’ll be named in the credits, so people all over Europe will get to hear about you. Siesta Productions is a fairly new company which was set up specifically to film The Cucaracha Club, but it’s already a respected player in the industry, and has achieved things bigger, better known companies have failed to pull off. Siesta got permission to film in Torrevieja, yet Eon Productions, who produce the James Bond films, were turned down.

If you’d like to be involved with The Cucaracha Club 2I: The Route of All Evil through product placement or sponsorship, or if you’d like to invest in the film in any other way, contact Clive Gray for more details about how your business can benefit from being featured in this unique film which will be produced in Torrevieja and feature local actors and artists. Email siestaproductions2012@gmail.com, or call 020 3695 1611 from the UK, 96 502 02 63 from Spain or 844 822 1007 from the USA.

Manolo Cano speaks of his love of painting