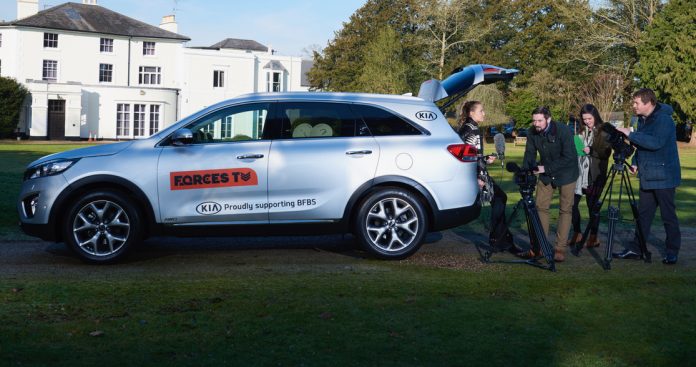 The team received a Sorento to aid their trip to Meribel, France

Kia Motors (UK) Ltd is proud to have sponsored the British Forces Broadcasting Service (BFBS) at the 2017 Inter Services Skiing and Snowboarding Championships in France, for the fifth year in a row. A team of four completed the 12 hour journey to Meribel in a Sorento, loaned to them by Kia Motors UK, loading every corner of the 605 litre boot capacity with camera and editing equipment before taking to the slopes to capture the action of the five day-competition.

Jon Knighton, Sports Producer of BFBS commented on receiving the Sorento said: “Once again we are hugely indebted to Kia Motors UK for loaning us such a capable vehicle. Not only could the Sorento carry all our team and kit in comfort, but once there, its 4×4 capabilities ensured they were able to get to where they needed to go in the most demanding wintery conditions.”

Catherine Brazier, Sports Reporter and Producer for BFBS led the broadcasting team to Meribel and said: “The event was a huge success as over two-hundred service men and women took part in the competition. We were so grateful for the Sorento. Its roomy interior ensured our total journey time of 24 hours was comfortable, and its 4×4 capabilities were welcome in the snow.”

The Inter Services Snow Sports Championship is an annual event in February, taking place in Meribel, France. The event aims to develop team building, self-discipline and moral courage all through the promotion of winter sports. Now in its 66thyear, it features winter sports such as Alpine skiing, snowboarding and Telemark skiing. This is the eleventh year that hundreds of Army, Navy and RAF athletes travel to the French ski resort to battle it out on the slopes.

BFBS broadcast to the British military across the world with forces related news, sports and entertainment. BFBS radio can be listened to globally on FM or on DAB digital Radio in the UK. Their Forces TV channel can be found on Sky Channel 264, Freesat 165 or Virgin 277. Alternatively, visit their website at: www.bfbs.com.

It’s (not) Turned out Nice Again as snow and hail hits Blackpool beach!

STEP BY STEP GUIDE TO WRITE THE PERFECT EXPOSITORY ESSAY