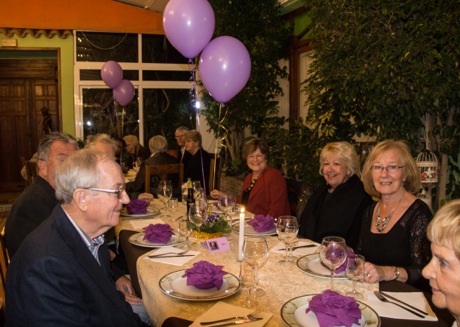 A candlelit surprise welcomed members of  Vivace  Classical  Choir as they arrived at El Prado restaurant in San Miguel on Friday night. The garden room had been decorated with beautiful table settings and decorations for this special occasion. The lilac colour theme represented the choir’s colourful ladies’ scarves worn for their concerts. Posters from all the concerts performed over the years were hung around the room, and folders of press cuttings and programmes were on display, reminding everyone of just what has been achieved in those years.

The candlelight was a surprise to everyone, though, as there was a major power cut in San Miguel due to roadworks in the town! As ever, the wonderful staff at El Prado rose to the occasion and provided temporary lighting as the guests arrived. A perfect scene, treated with a great deal of humour. And then, just as the food was about to be served, the lights were restored – to an enthusiastic cheer, and the evening continued in high spirits.

Each table was named after a composer, and became the table’s team name for a musical quiz, based mainly on the composers whose works the choir has sung, with the addition of a few quirky questions to really get the brains working. Tables were of  6, 7 and 8 people, and the smallest “Verdi” table won the prize! Quality winning over quantity! Congratulations to them!

The choir is already in rehearsal for their forthcoming Celebration Concert, an evening of some of the favourite pieces sung by the choir over the years. Two concerts will be performed, the first at La Siesta Church on Friday 31st March at 7.30, and the second in the Casa de Cultura in San Miguel on Saturday 1st April at 8.00. Details of ticket sales will be available soon.

After over 10 years in charge, Vivace’s Musical Director Tom Pargeter is handing over the baton. Starting with 16 singers in October 2006, Vivace now has some 60 members. Tom has really enjoyed the time, and very much hopes the choir will continue to go from strength to strength, offering the opportunity for local singers to learn and perform major classical works.

Camp of 3 Kings in Torrevieja has more than 5,000 visitors

Minecraft All The Mods 6 Modpack Lets Play Series Episode #1 – How Does this Happen?!