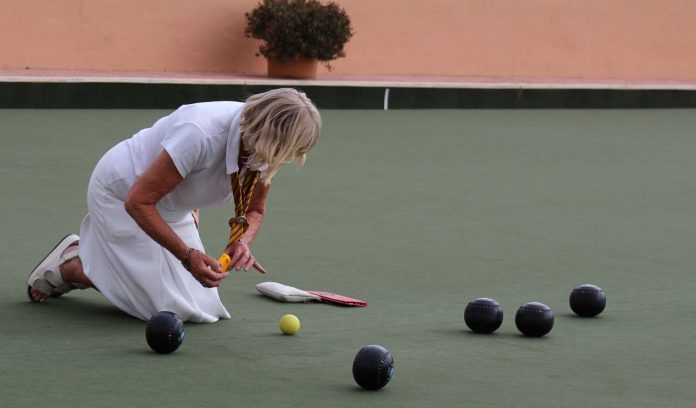 The week started with The Pintos playing host to The Emerald Isle Neptunes, on wet mat with a stiff varying wind, making play a little tricky. The Neptunes were a little let down by late unavailability of players and were a rink short despite attendance of reserves, as well as difficulty of some, in finding line and length. Pintos were able to take all the rinks and the overall shots by an appreciable margin.

In the afternoon The Broncos entertained The Eagles from Vistabella and turned in another good result for El Rancho, good play enabled them to take full advantage of the home rink in tricky conditions to take 5 rinks and draw the other, with a good shot difference.

On Friday The Mustangs played host to La Marina Seagulls, who are always good company and may struggle to adjust to the fast mat, but never complain. The Mustangs took advantage of the home mat to take the rinks 5-1, with losing rink being a close tussle. A good battle and good fun all round. Irene Thomson, Jim Taylor and Eddie Thomson 28-7. Ann Taylor, Malc Sykes and Jim Gracie 23-16. Bob Morgan, John Skipper and David Whitworth 20-12. Henry Ryder, Jan Bright and Richard Lee 16-18. Judy Foley, Keith Cunningham and Geoff Jones 21-11. Barbara Jones, Sheila Cooper and Carolyn Harris 34-11.

A sad day for the E.I. Claymores, fire a long cold trek to La Manga, they failed to win any rinks, & lost shots 52-168.   At least they returned with heads held high.

the long trip to Country Bowls was worthwhile for the Toreadors firstly we played without the wind and rain and secondly we had a excellent all round team performance. Winning on four rinks drawing on one and losing the last end on the remaining rink. Shots Toreadors 120 – 89 Flamingos. Points Toreadors 11 – 3 Flamingos.

Neither the Explorers nor the Pathfinders had a good Monday. Explorers found their way to San Luis to face the Trekkers and unfortunately lost 10 – 4. Shirley Hadaway, Arthur Cronk and Reg Jackson were worthy winners by five shots whereas Mike Stone, Jim Manning and Janet Parsons did very well winning 30 – 12.

The Pathfinders found their way to Emerald Isle and wished they hadn’t as they went down 12- 2.  Having said that there was a couple of close games, John Withers’ rink losing by just one shot and Dave Taylor by three.  Our winning rink was skipped by Terry Perchard plus Peter Bailey and Angie Butler. So well done to them.   The Dolphins had a rearranged game over at Country Bowls with the Geckos and lost by two points overall. Some close matches but the two winning rinks were John Rae, Dave McGaw and Jeff Halfhide  and the other rink not only won but got us the overall shot difference with a 33 – 4 drubbing so well played Brian Duff, Martin Butler and Allan Wilcock.

Another rearranged game was the Winter League away at La Siesta. As they say a six pointer with both at the wrong end of the league. We did well and came away with 8 points having gained the overall shots. Thanks to all who played on a cold and windy day and more thanks to the three winning rinks of Dave Hadaway and his three girls, Jean Perchard, Barbara Forshaw and Janet Parsons followed by the Captain’s wife, Shirley with Phil Pape, Steve Douglas and Ann Stone who won on the last end and our highest winning rink were the Armitages and the Taylors 21-9.

Second Winter League game this week, this time at home to El Cid.  We came out the winners by 8 points to 4. The Lathams, Pete Parsons and Kathy Manning had a good win then came the Hadaways, Dave with his girls again, that’s Jean Perchard, Barbara Forshaw and Janet Parsons had the highest winning rink.  Shirley with Phil Pape, Steve Douglas and Anne Stone won on the last end. The Berleen of Alex Whyte, Jim Freeman, Mike Surch and Dave Bulfield had an emphatic win 34 – 13.  PS I was not last off the green.          The Sharks swam in their own ocean and chopped down the Greenland  Oaks 12 – 2.  Great stuff. Alan Castle, Phil Pape and Janet Parsons were in splendid form winning 41 – 6. Shirley Hadaway, Dave O’Sullivan and Hilary Cronk weighed with a 23 – 9 win.  Dave Lewis, Jim Manning and Margaret McLaughlin and Alex Whyte, Jim Reeves and Kathy Manning won.  Roy Hart, Peter Parsons and Andy Bartlett scraped home by one shot.

Unfortunately the Seagulls had their wings trimmed away to the El Rancho Mustangs. Oh dear 12 – 2 down. Last Wood Latham managed to pull off our only win with laudable help from Wendy Latham and Barbara Forshaw. After the game Pat Davis presented Wendy and Barry with the Bowls Bag they had won.    The Dolphins fared a little better at San Miguel Jaguars and managed to get two points more than the Seagulls. John Withers, Jeff Halfhide and Shirley Withers plus Martin Butler, Garth Slater and Trevor Hancock both won.

The Meteors didn’t do as well, playing away to Vistabella Drivers, only picking up 3 points.  Winning team was Jan Allen, Gail & Fred Willshire 21-16:  Brian Miller, Mary Dyer, Lin Miller managed a draw 13 across. Hard lines to Margaret, Tony and Stuart only losing by 1 shot.  Shots for 95, against 115.

In the Fed Fours the Apaches lost their scalps when they played their rearranged game against Vistabella Vikings, losing on all 3 rinks!!!  The same week they played Quesada Panthers at home, knowing it would be a hard game, but thanks to Ken Hope, Pat McEwan, John & Gary Raby who were 17 across going into the last end, a brilliant wood by John took out the oppositions wood and the game went to San Miguel.  2 points to San Miguel 6 to Quesada.

In the Southern League, The Cougars had a bad day against Emerald Isle Cougars losing 10 points to 2.  Winning rink was Bob Graham, Ros Stockell, Barbara Scotthern 24-11.  Shots for 83, against 117.

WASPS are still going strong – Wednesday 1.30. Open to players of all abilities.