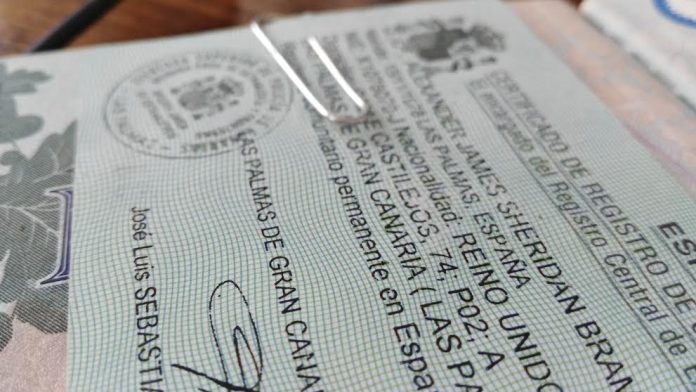 Our lives are punctuated, as well as defined, by numbers. How many of us can remember them all? We have National Insurance numbers, car registration numbers, mobile phone numbers, PIN numbers and all the rest. For expats in Spain, another number is required that is probably the most important one of them all, the NIE.

Expats arriving in Spain and the Canary Islands who intend to remain for a period of time, quickly realise that they need to register with the local Town Hall and police station before they can achieve anything worthwhile; they need an NIE number. These letters stand for ‘Numero de Identificacion de Extranjero’, which means ‘foreigners identification number’. It is a series of numbers currently beginning with the letter ‘X’ and ends with another letter.

When we moved to Spain, achieving the exulted status of someone with an NIE was not easy. I recall queuing for several days outside an office in Alicante, only to be turned away when the magic quota for the day, of around 100 NIEs, had been issued. We would then take our place very early the following morning, complete with picnic chairs, a bottle of water and a pack of sandwiches, for the same process to be repeated.

It the end, we became so angry that we made a deal with a local car salesman from whom we had planned to purchase a car once we had obtained the NIE.  We told him that we would only purchase a car from him if he obtained an NIE number for us. Surprisingly, we both had our NIE within 24 hours of the deal being made.

So why is this number so important? When expats want to open a bank account they will need their NIE number, as well as for buying a car, taking out a contract for electricity and water, taking out insurance, asking for a mobile phone contract or SIM card, buying or renting a property, applying for a mortgage and selling a property. The NIE number is also needed when living and working in Spain, as this is used for completing tax forms, opening a new business, and applying to register as self-employed. In short, you can do very little in Spain legally without it.

Foreigners who wish to become resident in Spain must provide proof that they have private health insurance, or proof of paying into Spain’s own insurance scheme for expats that gives access to the Spanish National Health Service; for more details about this, please see my Expat Survival website. In addition, foreigners must be able to prove that they have enough funds to support themselves and their family, or prove that they have a contract of employment, or intend to register as self-employed.

Many expats moving to Spain use an English-speaking lawyer to help them to apply for an NIE number if they do not speak Spanish fluently.  Nowadays, I usually suggest that newly arrived expats employ a ‘Gestor’ or an ‘Asesor’ who can do some of the nifty footwork needed for some of the bureaucratic high jumps that are necessary when moving to Spain. An NIE is usually produced swiftly and without complication, assuming of course that the correct paperwork is available to allow this to happen.

Expats can, of course, do this for themselves, but they need to be able to speak good Spanish in order to understand and complete the process.  An NIE number can be applied for at any foreigners’ office and some police stations, which are listed on the Direccion General de la Policia website. It is important to carefully check exactly what documents are needed, as these vary from region to region, between offices, as well as between the members of staff dealing with the application!

It is necessary to complete a form requesting an NIE, the ‘Solicitud de Numero de Identidad de Extranjero y Certificados’, known as EX15, which should be presented with a passport size photo of the applicant and a photocopy of the passport, but the original passport always needs to be shown as well.

Usually a date is given when the NIE can be collected from the office, and applicants are also given a form to take to a bank to pay the current fee for completion. The proof of payment given by the bank is then taken to the foreigners’ office where the precious NIE certificate can be collected. Some regions insist that the applicant visits the foreigners’ office at least for collection. Application times vary across the Spanish regions, but these offices should be able to give an approximate timescale.

Many expats may wish to undertake tasks such as this for themselves, since it is all part of the expat experience and gives a fascinating insight into life in bureaucratic Spain. It can also be an amusing experience, if they participate in the right frame of mind and do not exhibit anger or frustration at the inevitable delays or requests for yet another document. My last piece of essential advice is to stress the importance of always taking along a picnic chair, bottle of water and a pack of sandwiches – just in case!