What a couple of great games in each of the Monday leagues.  Unfortunately both our teams lost 8-6. In the Enterprise Division the Explorers played San Luis Klingons away, both sides had 3 winning rinks but the space travellers got the overall shots. Alex Whyte, Dave Hadaway and Kathy Manning won 19-15. Likewise Tom Spencer, Mike Smith and Anne Stone beat the Jones’s 17-14 and the other winning rink by one shot, was Margaret and Rob Finlayson with Maureen Kidd. So to the Discovery League where the Pathfinders at home played La Siesta Apollos.

How about this for a close result, two wins each, two draws each, two losses each and the Apollos had one shot advantage to get the extra points. Colin and Lynn Armitage with Clive Pratt and also Jean Perchard, Bernie Carr and Peter Bailey both drew 17-17 all against their opposition.  The two winners were John Morgan, Paul Tregoing and Mo Taylor plus John Withers, Martin Butler and Alan Wilcock.  I bet that doesn’t happen very often unless Arthur can tell me different. Winter League in the true sense and a little bit of history in our case.  Went to La Siesta to play our match only to be snowed off. Never before in La Marina history.

With the torrential rain that followed on Thursday the Dolphins and the Sharks had their games called off.  The Seagulls played  San Miguel Jaguars in glorious sunshine on Friday afternoon only to lose 10-4.  Disappointing but they were a good side. Sue Daniels, Mike Stone and Mo Taylor had a fine win and so did Colin Armitage, Arthur Cronk and Ann Stone.

Talking about the weather is quite normal for us Brits, but even our Spanish neighbours have been amazed by this week’s events.

Winter League: Wednesday 18th away v Greenlands, was “SNOWED OFF” to be replayed Tuesday 31st. Just when we thought the weather couldn’t give us any more surprises, suddenly there was snow- it came at different times and different ways from big, soft snowflakes drifting down at 8:00 am. around Horadada, Cabo Roig & La Florida but only reaching Greenlands, where it was initially clear and dry, around 10:00am. Suddenly there was a white cloud of mini “polystyrene balls” type snow smothering everything. In a pre match test the jack was able to travel a few feet before stopping, the bowls ran a short distance before turning into “snow-bowls” as they ground to a halt.

Voyager League Eagles had a bye.

Winter League snow-bowling! With snow falling all around, our home game v San Miguel got off to a tricky start, it was adjourned after five ends and resumed after hot drinks and a break in the weather.. though only briefly, sufficient ends were played before it became too difficult. Terrible freezing conditions out there but pleased to get the game played. Well done everyone concerned and it was a good win for the home team. L Bishop, P Tomkins, A Brown & I Kenyon 16-6. L Watkins, T French, C Thorpe & M Furness 16-8. B Regan, C Watkins, S Allman & B Dunn 11-6.S Burrows, B Brown, M Regan & G Thorpe 13-10. Shots, VB 67-(10) – 44-(2) SM.

Fed 4’s match was cancelled due to heavy rain. 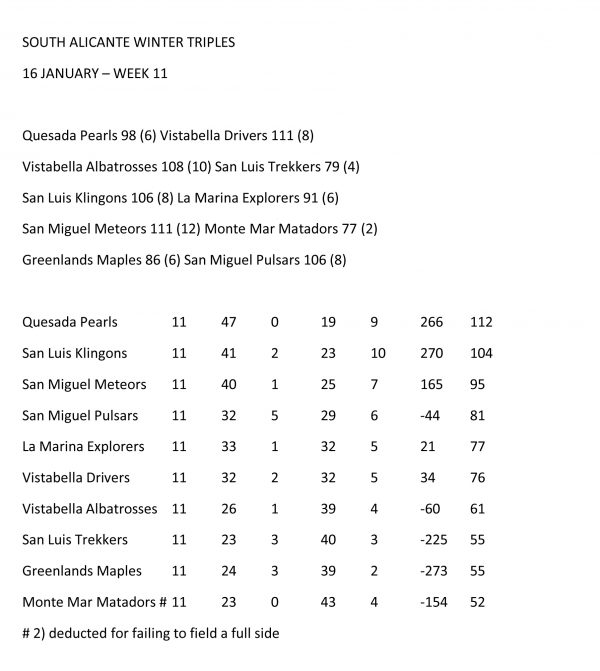 Monday found The Pintos playing away to Monte Mar Torreadores, a venue most of us enjoy playing, certainly I do, but alas, quite rightly it was my turn to be rested. The Pintos came away with 2 rinks and judging by the shots, several rinks could have gone either way, a fair result.  Judy Foley, Ann Taylor and Jim Taylor 18-17. Pam Harris, Liam Foley and John Skipper 15-20. Emma Walsh, Brian Harris and Merv Armstrong 12-27. Val Ryder, Barry Bright and Geoff Jones 15-19. Henry Ryder, Jan Bright and Richard Lee 16-23. Jim Gracie, Irene Thomson and Eddie Thomson 17-16.

Meanwhile The Broncos had a bye and played a friendly match against Vistabella.

On Friday The Mustangs played The Cougars at San Miguel, on a saturated mat that remained so despite the day changing from miserable to glorious, within the duration of the match. But the mat was playable and we had a good close match in great company. The Mustangs came away with two rinks and one drawn, a good result with just a 13 shot deficit.  Jim Taylor, Irene Thomson and Eddie Thomson 24-11. Ann Taylor, Malc Sykes and Jim Gracie 20-23. June Whitfield, Jane Hamill and Stew Hamill 19-19. Henry Ryder, Merv Armstrong and David Whitworth 7-23. Judy Foley, Keith Cunningham and Geoff Jones 13-24. Barbara Jones, Sheila Cooper and Carolyn Harris 17-13.

The Raider’s Home match against Emerald Isle Outlaws was postponed due to the mat being unplayable; the new play date is yet to be decided. For membership details contact Brian Taylor on 965077093 or at briantaylor_es@yahoo.co.uk or Carolyn Harris on 966774316 or at elranchobowls.secretary@gmail.com 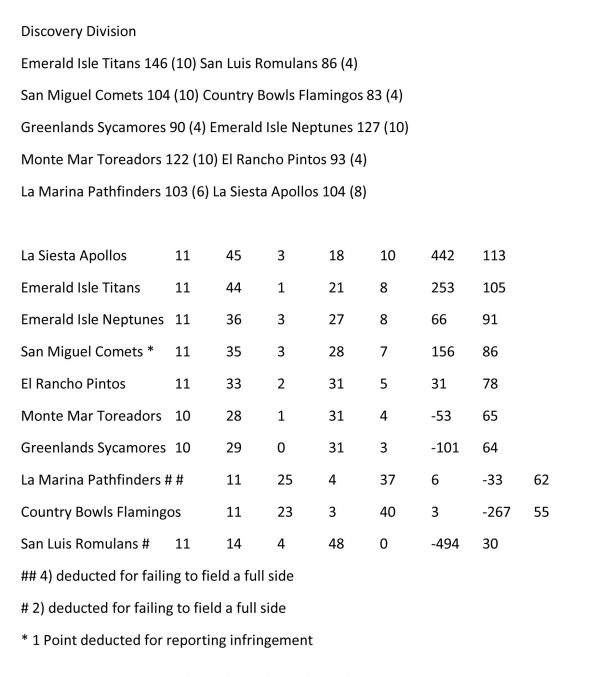 Just what the Neptunes needed.  Regret no result submitted for Saturns so no report, sorry.

Winter League, Wed 18th.  And then came the SNOW, no game!

The Apollos continued their challenge for promotion by the narrowest of wins way at La Marina Pathfinders the overall shots score being 104 shots to 103 in favour of the Apollos. Two matches were drawn with score being 17 apiece whilst the 18-11 win by Robert and Ann Heath with John Ball being the highest margin victory. Barbara and Jack Cooper with George Richardson managed a narrow 17-15 win against their opponents this ensured that La Siesta picked up 8 points to La Marina’s 6.

The Pioneers entertained promotion challenging Quesada Diamonds and this showed in a resounding win for the Diamonds by 152 shots to 85.The winning rink for The Pioneers was achieved by Dennis Andrew, Val Dalton and Fred Charman by 21 shots to 19 which included nearly getting a hot shot with 8 points scored on one end. The overall points being 12-2 to Quesada.

In the Fed 4’s  the Hoopoes travelled to Montemar Picadors in windy and cold conditions and came back with a 6-2 win by 62 shots to 48 with the winning rinks being Barbara and Jack Cooper with Bill and Sue Jordan 27-10 and Val Dalton, Jean Hepehi with Florence and Mike Edwards winning 28-14.

On Wednesday morning the Winter League match at home to La Marina was postponed due to snow. Yes, snow. The fixture has been re-arranged for the following Sunday.

Due to the inclement weather the Blues match has been postponed and with the Golds having a bye nothing further to report this week.

Monday January 16th – Monte Mar Toreadors v El Rancho Pintos. A lovely January day, if a bit windy for bowling. The Toreadors reversed there defeat earlier in the season at El Rancho with a good overall performance, winning on four rinks and losing on two rinks by one shot on each of the rinks.

Monte Mar Toreadors v San Luis Pumas – Very unexpectedly after the recent weather we arrived on the rink at San Luis in bright sunshine. Despite the fact we played with one rink short which meant we conceded two points and ten shots before we started we secured a win.

Believe it or not, the Winter League played their game on the snowy Wednesday at Vistabella. Couldn’t have been at a worse green, which is totally exposed to the elements!! After playing 5/6 ends they had to stop due to heavy snow, they had a coffee break for 45 mins, then resumed playing. At the time they were winning on 3 rinks.  Due to further heavy snow, they had to stop playing on the 14th ends.  The final result being San Miguel 2 points, Vistabella 10 points. The winning team Cliff Plaisted, Val & Chris Collier, Stuart Denholm 14-11.  Well done to the Berleen who also won. Total shots for 44 – against 67.  Team Captain would like to thank all who played in dreadful conditions, and has promised hot toddies all round!!!!

All Fed 4 games were cancelled on Thursday due to flooded greens and heavy rain.  Please contact team captains for rearranged times.

Report warned months ago of problems with field hospitals

Mayors comply with the closure of large municipalities