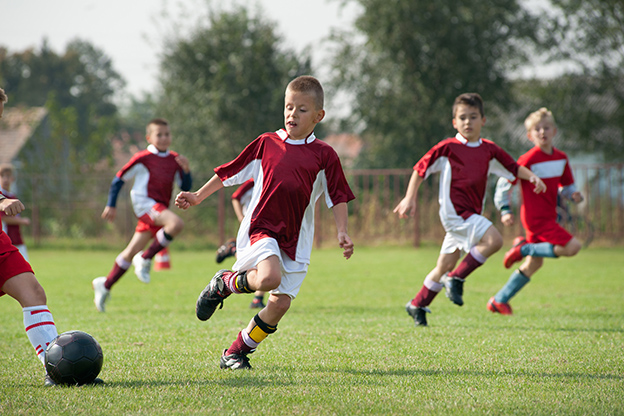 The game kicked off with Daya facing into a strong wind and having to try play the ball on the ground.  This proved to be more difficult than it sounded as the home side wanted to play wind assisted high balls into Daya’s penalty area at every opportunity.  Jaime in the visitors’ goal had to be alert to this danger.  Midway through the half the wind eased down a little and Daya were controlling the game quite well but the high ball over the top was still a danger to them.  The game so far had not seen much goal mouth action at either end but that was soon to change!

On twenty eight minutes a well taken corner from the home side saw a fierce shot come crashing back off the Daya bar and scrambled away to safety.  Moments later Fulgencio were through on Daya’s goal and Jaime had to make a smart save to keep it at 0-0.  On thirty five minutes the home side should have been a goal up when a one on one situation produced the miss of the match so far, the shot being blasted over the bar.

Minutes later Jaime was caught off his goal line as a speculative lob from distance flew over his head, hit the inside of the post and bounced back into his arms !!  It was all Fulgencio now and how they were not a goal up was a complete mystery.  So 0-0 at the break but just how Daya’s goal was still intact was anybody’s guess.  San Fulgencio started the second period strongly and on fifty minutes should have done better from a well taken corner that found an unmarked player at the far post, his control was poor and the chance was gone.  Daya’s defence was now taking a battering and it was hard to see them surviving much longer.

There was a chink of light for Daya on sixty five minutes, they were awarded a free kick just outside Fulgencio’s penalty area.  Although the free kick was well struck the defensive wall did its job.  Another big let off for Daya came on seventy two minutes when an excellent chance was blasted wide by Fulgencio when it was easier to score than miss!  This miss seemed to wake up Daya and for the final ten minutes they tore into the home side and looked the more likely to score, even having a good penalty shout turned down.

Like their opponents though the visitors could not find the back of the net so the game ended goalless.  Near the end of the game Daya’s Fernando suffered a nasty injury and had to be carried off adding to coach, Jesus, problems.  His team was already missing several key players through injury and suspension.  He will probably see this 0-0 result as a point gained and not two lost.  How Fulgencio did not win this game was just incredible.

Jaime worked hard for his clean sheet and was helped out with some excellent work by his defence, notably Francisco and also by the many shocking misses from San Fulgencio.