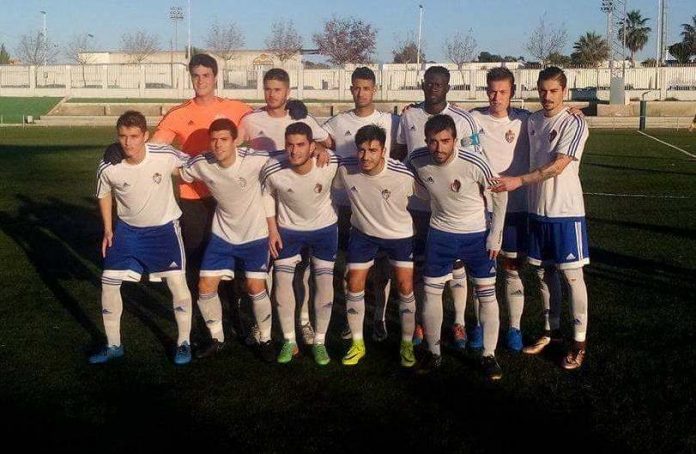 Steve Hibberd writes ……Torry got 2017 underway with a home match at the Nelson Mandela Stadium against Villarreal ´C´, no doubt having revenge on the agenda following the 3-2 defeat handed out in the first away match of the season.  Villarreal meanwhile are on a poor run at the moment, having secured only 3 points from the last 15 on offer.

Manager Pedreño has certainly left no stone unturned, in his quest to promote Torry up the div 3 table.  It´s become quite obvious to us fans that drastic measures needed to be implemented, if our favourite local side is not to make the dreaded drop into more regional football.

With that in mind, Pedreño has had a bit of a clear out.  Out have gone Ruescas, Pecha and Soto (none of whom notched up much game time), but 4 players have arrived to take their place.

Welcome to Central defenders Tato and Jorge, who both join from 3rd div sides (Tato from Buzandada in the Canaries, Jorge from Balearic side Pena).  Attacking midfielders Diaby and Ilyes both come in from foreign lands.  Diaby originates from Mali, Africa, and joins from Belgian side Woluwe-Zaventem, whilst Frenchman Ilyes has signed from Roannais Foot.

And more good news in the form of top scorer Pastor, now deciding to stay until the end of the season, and not ply his trade down under, although if the truth be known I understand there is some difficulty in him acquiring a visa.

Unfortunately, Lewis was missing for the 1st of a 4 game suspension, given as punishment for his sending off in the final match of 2016, a 1-1 draw at Almoradi.  Also suspended were Jorge and keeper Buba, allowing Lucas to make his first start for Torry between the sticks.

But for the leniency of referee Campo Hernandez his debut could have been one of the shortest on record, lasting a little under 3 minutes, when the keeper rushed out of his area to upend Villarreal’s striker Chepe who was clear on goal. Inexplicably Hernandez issued a mere yellow card when a red looked to be the only possible decision he could make. Lucas was a very lucky man indeed.

Fortunately, from the resultant free kick on the edge of the box, Chepe headed wide by a good margin.

The visitors certainly had the best of the opening period with Torry still looking like they hadn’t quite shaken off the holiday spirit but it was a half of few chances with the home fans having to wait until midway through the period for ‘the whites’ first opportunity of note. Unfortunately the shot from Matheus lacked any real pace and was easily gathered by Fuoli.

Villarreal winger Andrei almost put the visitors ahead just prior to the interval but his close-range effort was blasted way over the bar. And that’s how it all stayed at the interval with both sides trooping off following a lacklustre first 45.

However, if there was little going on during the first period we had more than enough to keep us on the edge of our seats in the second, which unfortunately began with a goal for the visitors, as Simon opened the scoring from a tight angle with just 2 minutes gone.

But this proved to be the wake up call that the home side needed and as they began to take the game to Villarreal the chances became to fall for Torry.

They were back on level terms in the 66th minute with debut boy Jorge heading home from a cross by Luis Carlos, at that stage nothing less than they deserved.

With Lucas making saves at the other end Robles, and Matheus both went close and then we saw the miss, not only of the match but quite probably of the season. On 86 minutes with a wide open goal at his mercy Hugo did the impossible by hitting the post. In an empty area the ball then fell kindly to Robles, a yard off the line and completely unmarked but rather bizarrely he too was unable to convert although the players were absolutely convinced that the ball crossed the line.

With play waved on by the referee Villarreal then broke upfield for Lucas to pull off another great save from Akale.

But there was still even more drama to come, Hugo adjudged to be offside when his shot found the back of the visitors net only then for Villarreal to break straight from the free kick. With work to do sub Akale picked the ball up on the half way line, before dribbling it into the goal area and slotting home to give the visitors an unlikely 2nd goal.

This was a game that only moments earlier Torry looked to have in the bag. Quite how it all came to nothing will be a subject for discussion long into the week.

Unfortunately disturbing scenes after the final whistle saw the involvement of the Guardia Civil as red cards were issued to Carrasco and Chepe  and a multitude of yellows to the Villarreal bench.

So, whilst the victory keeps Villarreal in the thick of the promotion hunt the Torrevejense will be dismayed to see that a number of their rivals picked up all three points as they, once again, failed to add to their tally, so as they make the short journey to Orihuela next weekend the quest for points against their mid table opponents takes on an ever more important significance.