Spangles Ladies’ Harmony Chorus love to get into the festive spirit in the lead up to Christmas and this year has been exceptional for the ladies, who have been raising charity funds in several venues.

“This has been our busiest year yet for requests to sing at peoples Christmas celebrations” said Wendy Grant, Chorus Musical Director. 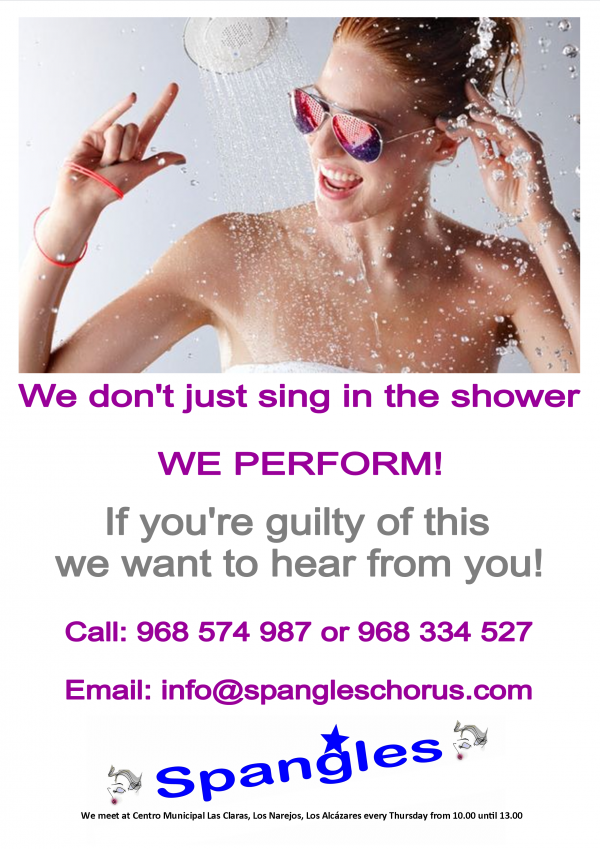 The holiday season started with three events – the first at the Spanglish Bar in Balsicas, with the ladies helping turn on the Christmas lights. This was swiftly followed by a Christmas Fair at the Palm Lounge in Cabo de Palos, raising money for a local animal rescue charity. Two days later, they were singing their hearts out at the Cruz Azul animal charity’s Christmas Fair at the Bulevar Oasis in Los Alcázares.

Spangles held their traditional Christmas Concert at the town hall in Los Alcázares on 9 December and were delighted to help Crescendo Choir raise a staggering 975€ for Age Concern at a concert in Torrevieja the following day.

“Our favourite venue was yet to come” commented Lyn Baines, Co-Chorus Manager. “We were delighted to sing for the residents and staff of the Residencia Lozar in Pozo Aledo. They always give us a warm welcome and it’s a pleasure to sing for them each year.”

But it wasn’t over! From Pozo Aledo, Spangles went on to sing a private ladies’ lunch in Sucina!

After a short Christmas break and with many still visiting family, a small group of Spangles chorus members entered a carol competition featuring local traditional choirs and bands. This was organised by the Asociación Cultural Bahía Traíña.

“It was an honour to be offered the opportunity to demonstrate the barbershop style of singing to a new Spanish audience” remarked Wendy “And we were delighted with third place in our first non-barbershop contest.”

RUN THE RACE WITH MAGNETS