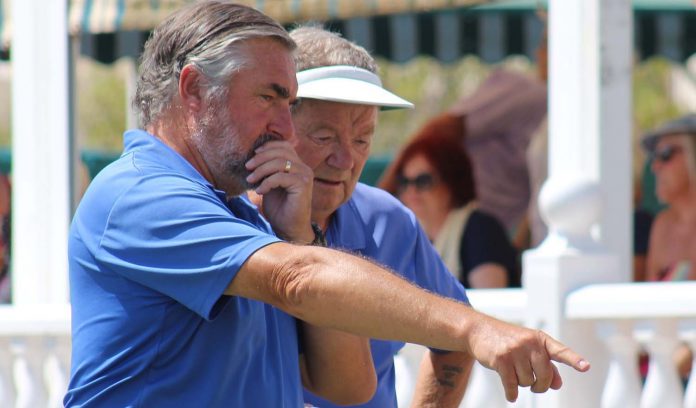 Both teams had close matches on Monday, one winning and one just losing. The unlucky losers were the Explorers, both sides winning 3 rinks but Quesada Pearls getting the overall shots. Tom Spencer, Mike Smith and Anne Stone won by one shot whereas Anne’s hubby, Mike had the highest winning rink with the help of Ron Maiden and Roger Stacey. Dave Hadaway, Margaret Finlayson and Janet Parsons were the other winners.

Just the same for the Pathfinders against the Monte Mar Toreadors except the other way round, we had the overall shots for an eight – six win. Our victorious winners were John Rae, Martin Butler and Jean Tregoing; Barry Sadler, Bernie Carr and Lorita Rae and Dave Taylor, Paul Tregoing and Mo Taylor.  Well done the husbands and wives. Oh dear, oh dear.  Winter League dropped below our average this week only getting one point against a strong Quesada side. Lovely to meet up with old friends and I managed with great help from Pete Parsons, Kathy Manning and Wendy Latham our single point.

Well we finished the week on a high note when none of the three teams playing lost.  Well done to everyone.  The Sharks played at home to the Monte Mar Matadors and won 11-3. Roy Hart, Peter Parsons and Andy Bartlett won so did Alan Castle, Phil Pape and Janet Parsons plus Shirley Hadaway, Tom Spencer and Margaret McLaughlin.  Alex Whyte, Margaret Finlayson and Hilary Cronk managed a draw.  Unfortunately an accident stopped play so John Mallett, Ron Maiden and Maureen Kidd also won. The Seagulls won 10-4 against Country Bowls Geckos with Colin Armitage, Arthur Cronk and Ann Stone winning a very close game.

Even closer was the game won by Jim Freeman, Steve Hindle and Steve Douglas who won it on the last end. John Morgan, Mike Stone and Lynne Armitage had the highest winning rink.  While Barry and Wendy Latham plus Barbara Forshaw carried on their winning ways. The Dolphins playing away at San Miguel against the Cougars had a great draw winning 3 ½ to 2 ½ rinks and just losing out on the overall shots by four. Brian Duff, Cliff Rawlinson and Martin Butler; John Withers, Mike Smith and Shirley Withers and John Rae, Dave McGaw and Allan Wilcock all won.  Bill Jones, Carol Smith and Jack Chorlton drew. 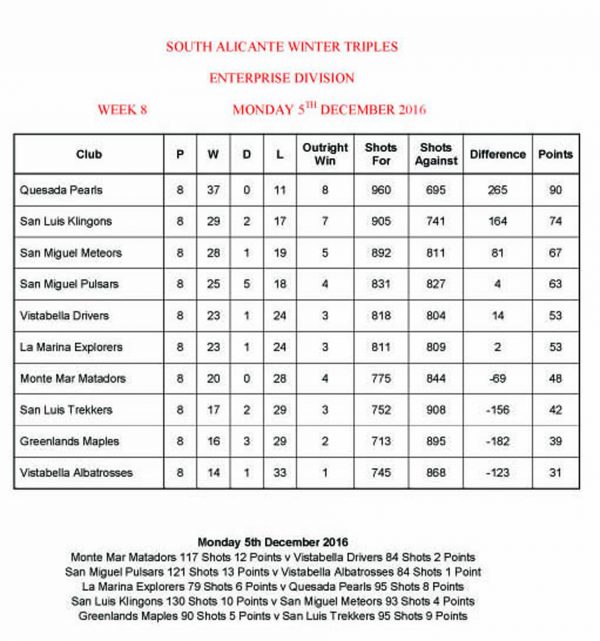 Monday brought a trip to La Siesta to play The Apollos, on a wet mat after a very wet day and night. As we know some rinks can be a little tricky and you can be well behind before you find the lines. But the company was good and the rain held off, but we came away with just the one rink.

The Broncos played their postponed home fixture against Horadada Falcons on Thursday and took the rinks by 4-2, with the shots by 2, a good result!

In the afternoon The Raiders played host to San Luis Pumas and it was a good day for them too, taking 5-1 and also the overall shots. Gill Bartlett, Tony Robinson and Richard Needham 9-23. David Wright, Peter Blackburn and Keith Longshaw 23-9. Gary Dunstone, Rob Clark and Graham Day 13-11. Fred Dunstone, Bob Easthope and Mick Ager 23-9. Janet Wright, Brian Taylor and Gary Newson 24-18. Ngaio Baldwin, Diane Yates and Terry Buswell 17-15.  For membership details contact Brian Taylor on 965077093 or  at briantaylor_es@yahoo.co.uk or Carolyn Harris on 966774316 or at elranchobowls.secretary@gmail.com 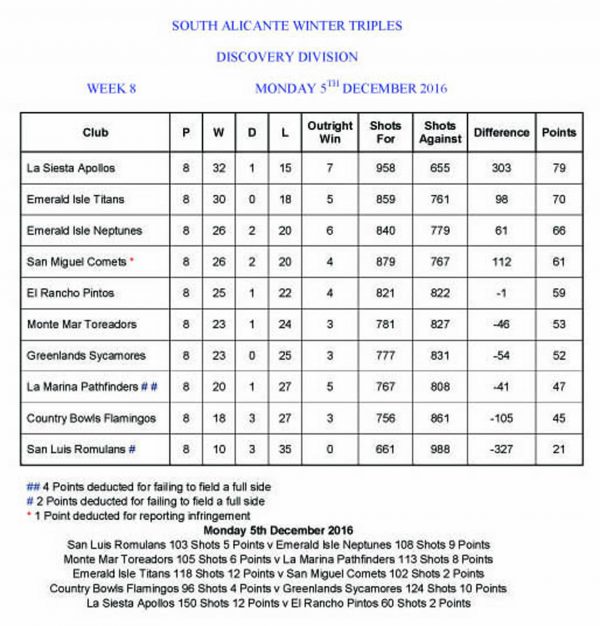 5th Dec, Moonrakers  v La Siesta Pioneers. A Gloriuus win for the Moonrakres, winning on 5 rinks, & well ahead on shots, I have the winners but not the individual scores.

Well done to all the teams, what a great week.

Many thanks to BRIN for organising the monthly game v Bobs Hijackers (our friends) the last match of the year was won by the Hijackers, but we all enjoyed it & the great company, see you next year,  Happy Christmas from the Isle. 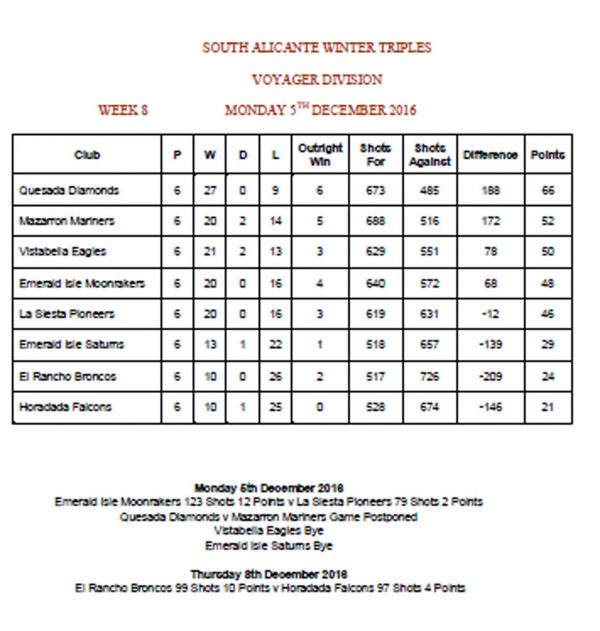 Cracking Result for the Apollos beating El Rancho Pintos at home by 150 shots to 60 gaining 12 points to there opponents 2 keeping the team at the top of the table. Best result came from Irene Laverick, Ramsay Sinclair & Brian Gardiner 38 – 6 leading  from start to finish and after 9 ends the score was 24-1 .Dawn & John Taylor and Harold Chareleton also won 30 – 5. Closely followed were Barbara Jack & Jean Cooper winning 28 – 5,another team which lead from beginning. Sheila Chorley,Trish and Pat Reilly won 20 – 10 coming from behind on the 9th end picking up 15shots on the last 9 ends. Finally Ann & Robert Heath with Brian Fraser won 20-15.

Two Winter League matches this week both resulting in 12-2 defeats. The first on Saturday away at Quesada by 120 shots to 77. The winning rink was Barbara Cooper,Tony Campbell,George Richardson and Jean Cooper who held on to win 16-15. On Wednesday our visitors Greenlands won by 89 shots to 87 with Janet Charman,Trish Reilly,Tony Dalton and Brian Gardiner winning for La Siesta by an excellent 34-12.

The Blues travelled to El Rancho Mustangs and on a green which most visiting teams find tricky this was no different for La Siesta who lost 14-0 with a shots scoreline of 67-138.

The Golds were away at Horadada Royals and lost 10 points to 4 with a score difference of 77-126.Winners for the Golds were Hilary Clarke,Fred Charman and Tony Dalton 25-16 and Ron Sheldon,Val Dalton and Sid Gallup 16-13

The Toreadors were up against La Marina Pathfinders today and managed to win on three rinks but lost on overall shots by 105 to 113. The result was therefore points Toreadors 6 – 8 Pathfinders. Well done to our winning rinks of Sheila Roberts, Howie Williams and Skip Joan Harding. Sue Bounds, Les Bounds and Skip Jan Gatward. John Caiger, David Thomas and Skip Babs Caiger.

A good result against Bonalba winning on four rinks and winning the Berleen. Well done to all, too many winning rinks to mention all the names.

The Meteors had a fantastic result against Greenlands Maples storming away with a 14 – nil win. Total shots 140 to 71.  Well done team.

The Comets played La Marina Pathfinders away, winning on 4 rinks and a close overall shots 101 to 98. Comets didn’t do as well against Emerald Isle Titans only winning on one rink.  Well done to Joe Getgood, Dave Bradbury, Bob Donnelly winning 24-10.  Overall shots 102 for the Comets, 118 against.

SAL league, nothing to rejoice about here, the Albatrosses had a nightmare playing the Pulsars at San Miguel only coming away with one point, not good!

The Drivers went all the way to MonteMar for two points against the Matadors, that came from the trip of J Chaplin, S Norris & I Kenyon.

The Eagles had a bye.

Southern league A. The Lanzadores had a successful day at San Luis against the mighty Lions, three winning rinks and a drawn rink, congratulations to the team, not an easy green. Shots, VB 105 (9) – 93 (5) SL. Thank you to our hosts for inviting us to stay for a Christmas lunch…which we all enjoyed.

Picadors were at home to the Greenlands Oaks, two winning rinks and also the shot difference…just!

Southern league C. The Conquistadores away to Greenlands Cedars had a blip this week and lost their game 4-10. They will be back fighting fit after Christmas.