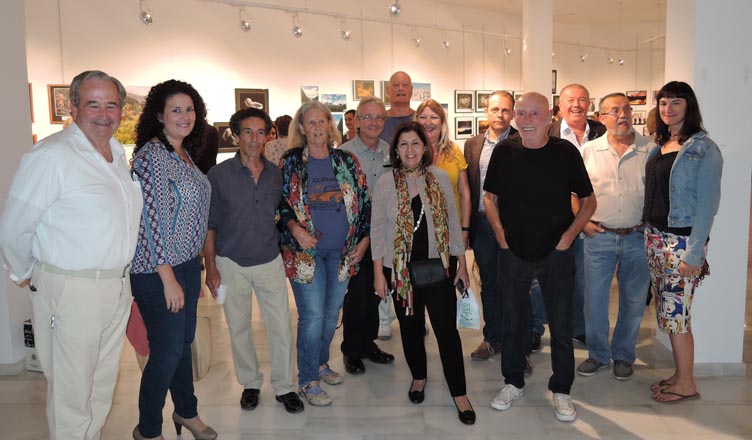 Last Friday saw the inauguration of a photography exhibition by the collective “Vera Photo Club”.  The show, organized by Mojácar Town Council, in the “La Fuente” Art Centre, will be open to the public until November 30.

The opening was attended by the Mayor of Mojácar, Rosmari Cano, and Raquel Belmonte, Mojácar Councillor for Culture, who showed their interest in the works on show and the methods used in their production. They were accompanied by members of the Vera Photo Club Collective, as well as the large audience that attended the opening of the exhibition.

For the fourth consecutive year in Mojácar, the Vera Photo Club is exhibiting a sample of the works by 26 of the group’s photographers. The aim of the annual event is to show their members best works and demonstrate their progress in the exciting world of photography.

Around two hundred photographs and slides make up this interesting exhibition in which the objective of the artists is to capture different aspects of human and world geography and, so entertain the onlooker with hidden messages and images that are perhaps not as simple as they first seem.

The club was founded six years ago by Stan Roberts, an enthusiastic amateur photographer, jazz lover and passionate drummer. He was able to encourage two friends to think of creating a platform where they could debate, learn and improve anything related to the world of images.

From the first meetings of these three friends, with the spirit of the sixties in their hearts along with bohemian artistic talent and their gaze set on the magical light of Mojácar, more members soon joined. In a short period of time, from the original founders, Vera Photo Club has grown to have around seventy members and be the largest and most important photography forum in the province.

One of its founders, Rod Westwood, a professional photographer in the fashion world, is now President of this thriving club, made up of members of all skill levels, from professionals to beginners in the world of photography.

They have a monthly get together where they usually present their photographs (sometimes with a special guest), show videos or give classes. They also propose themes or projects that are worked on then presented for discussion later by the most experienced members.