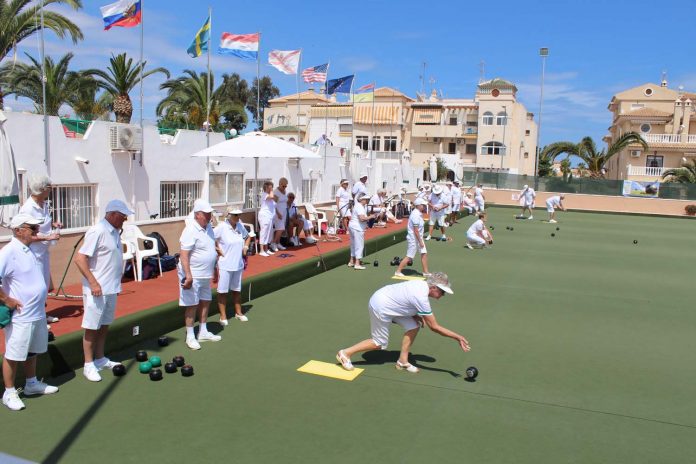 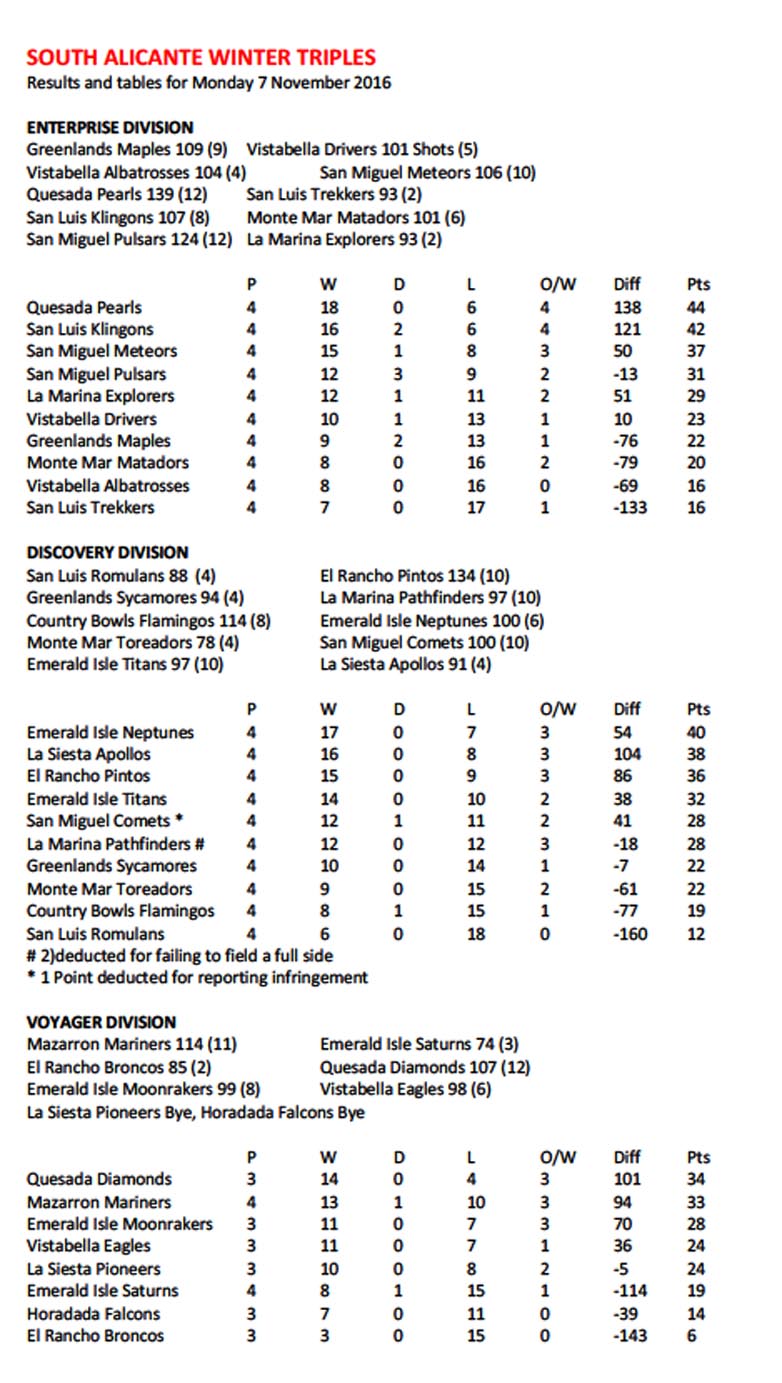 At 11am on Friday 11th November and Sunday 13th, San Miguel Bowls Green held a minutes silence in memory of all those who lost their lives for their country, and many thanks to Debbie, the Chef at Cheers Bar, who gave a superb rendition of the Last Post on her trumpet.

The WASPS are proving extremely popular on Wednesday afternoons.  Come along at 1.30, 5 euros for an afternoons bowling, shoes, woods and free tuition if required.  No dress code – suitable for all abilities.

We have had numerous enquiries about our Club Mornings.  Bowlers are welcome to join us on Sundays, Tuesday and Thursday mornings, 0945 for 1015 start.  5 euro visitors fee, players must wear white or grey trousers/shorts and white tops.

Vistabella are offering new bowlers a free morning of bowling on a saturday morning with an hour of tuition.

A different story for La Siesta on Wednesday in the Winter League, away at Vistabella, where a brilliant performance saw La Siesta triumph by 79 shots to 70 in a close encounter winning on 4 of the 5 rinks thereby gaining ten points to their opponents two. A great team performance so difficult to mention individuals. What a game on one rink though where in 18 ends 23 shots were shared with Sheila Chorley, Fred Charman, Brian Gardiner and Alex Morrice winning 12-11 against a rink skipped for Vistabella by La Siesta old boy Gary Thorpe.

The Blues were at home to San Miguel Cougars and won by 110 shots to 105 winning on 4 rinks and taking the points 10-4.Star rink for la Siesta was Irene Laverick, Pat Harman and Irene Mangan winning 29-14 whilst the tightest match saw Dawn Taylor, Trish Reilly and Harold Charleton winning by a single shot 23-22.

The Golds visited Vistabella on a pleasant afternoon but were beaten by 128 shots to 83 losing the match by 10 points to 4. Winning rinks for La Siesta were Jean James,Tony Campbell and John Lincoln 21-15 and Hilary Clarke, Sheila Millward and Johnnie Ryder 21-18.

A chilly start to the day weather wise which was matched by a slow start for the Toreadors, who were down on all six rinks early on. We did improve to win on two rinks and losing narrowly on two other rinks. A good over all win for the Comets winning, 10 – 4 points Toreadors. Shots Comets 100 – 77 Toreadors.

Wednesday 9th November. Winter League away to Quesada, we expected a tough game and that is what we got. But we did not let ourselves down winning on two rinks and also winning the Berleen. Monte Mar 4 – 8 Quesada.

On Monday morning The Broncos, played host to Quesada Diamonds who are always a tough opponent and although the score was 5 rinks to 1 in favour of Quesada, I note that several rinks were close. Often whether you win or lose is purely dependent upon who you are drawn against, but much more important is the spirit of the match and enjoying yourself in good company.

In the afternoon The Pintos were entertained by The Romulans at San Luis and put on a fine display to take the rinks by 4-2 and the overall shots by a reasonable margin, a good result away from home. Placing them in third place in the league, though it is a long journey to season’s end.

Friday Morning found The Mustangs at San Miguel playing The Jaguars, always one of our tougher fixtures and great fun. It was a very close match with both teams taking 3 rinks and only 3 shots difference in favour of The Jaguars, a very good result for The Mustangs away from home.

In the afternoon The Raiders played The Roundheads at Emerald Isle for a difficult match against a strong team. Alas they came away with just the one rink, but there is no shame in that and I am sure the company was good.

The Morning game saw the Moonrakers playing Vistabella Eagles. In a very tight game E I came out on top 8-6 and an aggregate of 99-98

In the Enterprise Division the Maples were at home to Vistabella Drivers, Final result was as follows…..Total shots for – 109.  Total shots against- 101.  Points for – 9.  points against – 5. Highest scoring rink were – Ann Butterworth, Dave Dudding, and skip Dave Thompson.25 shots to 16.

In the Southern League The Oaks were away to Mazarron Miners, Final scores were as follows ……..Total shots for – 94.  Total shots against – 100. Points for 6.  points against  – 8. Highest scoring rink was  – Zoe Wilcock, John Newell, Skip Jim Wilcock. 25 shots to 10.