After remembering how I felt following the challenge of 2015 (5km kayaking down the Rio Segura from Murcia to Guardamar) I began to wonder what I´d got myself into again as I sat astride my motorbike in Gran Alacant.

Behind me was my son, who was joining me on this trip, and another dozen bikers from the Rawhider Motorcycle Club who had come to see us off. Still, it was too late too worry now and with both myself and my son, Mitch, packed onto the bikes like two Bedouin heading into the desert we left Gran Alacant and headed north on what would be the first of twenty four days on the road; travelling Spain´s perimeter without using motorways.

The reason? As we had last year, we wanted to raise the profile (and a few euros hopefully) for two causes very close to our hearts, the AECC (Spanish Cancer Research) and the Samaritans in Spain, and with the help a some very good friends and family, plus the generous businesses and individuals that paid towards the cost of fuel and food for the trip, (we limited ourselves to five euros each per day for the duration of the challenge) it was now happening.

We headed north through Alicante and along the coast to Valencia for our first night´s stop at a campsite. Our team had arranged free camping for us all over Spain so we knew we at least had somewhere to sleep at night. From Valencia we continued along the coast to Tarragona and Barcelona, two beautiful cities and then onwards and upwards to Girona for our last night before heading into the Pyrenees for three days.

I can honestly say that I´ve never seen so many eagles soaring almost level with us high up in the mountains, it was a struggle to keep our eyes on the roads at times as we were both mesmerised by the stunning creatures. The Pyrenees was full of surprises of other shapes too, whether it was a cow calmly munching on the kerbside grass – while blocking the rest of the road with its body – or an old abandoned village that you could still walk around and look into the stone-built houses and shops. 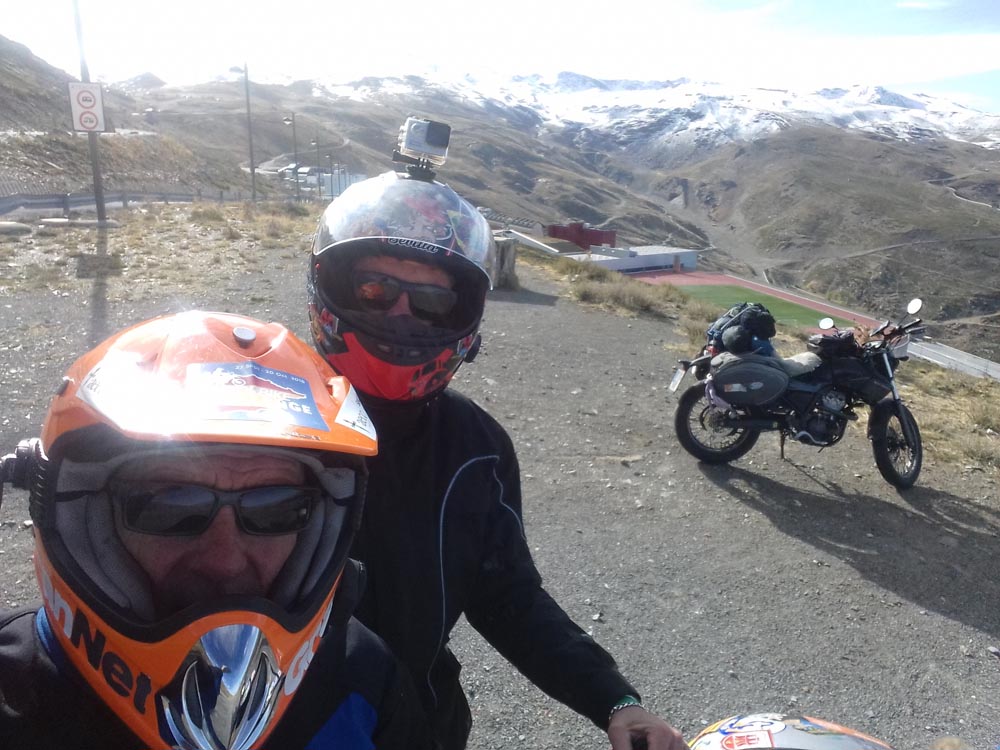 Once out of the Pyrenees and up to the north coast of Spain we were once again chattering away on our helmet intercoms at the stunning coastline and the wonderfully friendly people, especially in the Basque region where the accent seems almost Italian. All along the north coast we made slow but steady progress, which was fine as the views remained refreshing and always beautiful, however the temperature at night and in the morning brought to mind other words to replace ´refreshing´.

Damp was the biggest problem throughout the journey and in the north it meant putting up an already soaking wet tent in the evening that would have no chance of getting dry by the morning when the process would begin all over again. We didn’t really mind though because getting on the bikes each morning and heading somewhere new every day more than made up for a soggy tent and wet socks.

Once we´d begun to head south following a night in A Coruña the air noticeably warmed a little and with the sun now setting to our right it was far easier to ride in the late afternoon; we´d had the last few days of riding with the sun setting in our eyes.

The border with Portugal was on our right too as we headed further south via Salamanca, Badajoz and finally we touched the southern coast at Faro in Portugal before turning a sharp left and heading into Huelva, Spain for the night. We´d had some problems with Mitch´s bike all day which had meant thirteen hours on the road and 540km covered. But the bike would need some attention in the morning as by now it was far too dark to look.

Mitch was already working on the bike by the time I´d returned from the shower and with blackened hands, and face, from the grease and oil, he proudly held up the carburettor and pointed out the problem; a torn hose. Within half an hour we were back on the road and heading towards Seville and Jerez for a visit before returning to the coast the next day and a date with a TV company in Marbella.

We made it to the TV interview on time and were soon back on the road and heading up through the Sierra Nevada to meet an old friend of mine, Molly Seers, who was taking up for a drink in one of my favourite cities of the world, Granada. The place also held another plan for us too, we wanted to head up Spain´s highest mainland mountain, Mulhacen, and get a photo of the two of us up there at 3,000 metres high.

Now that was cold! we´d ridden up the 40km (which takes about an hour and a half) and got our photo, and possibly frostbite too, but it was well worth it just for the amazing views, and we knew we had a comfy bed and hot dinner waiting for us that evening at a bed and breakfast in Almeria, Casa Oasis had donated the night to us for the trip. We headed off once again, possibly a little too quickly.

By the time we left the bed and breakfast the next morning we were well and truly refreshed. Paula had looked after us admirably and her, soon to be, husband, Derreck had made sure we had cool beers at hand all evening too.

We knew now were were not really far from home; about 200km and we had just a few days of riding left before it would all be over. We couldn´t wait to see our girlfriends, and I missed my Labrador, Woopy a lot, but the thought of not getting up every day and not discovering new places on our motorbikes left us a little quiet over the intercoms at times a s we reflected on the previous days of adventure we´d had.

From Almeria up the Costa Calida, passing Mazarron and Cartagena and into the Costa Blanca. The trip was coming to an end as as we visited sponsors and the charities in Torrevieja we prepared for what would be the last half hour or so of our experience.

there´s always a twist in the best stories right? Well ours was no different. Eight kilometres from home, and with the heavens having just opened, my bike (which I´d been nursing back gently with a problem for the last 500km) couldn´t go any further and just stopped. With the rain lashing down as we stood by the roadside getting drenched and we waited for our girlfriends to find us with the car we prepared to both get on Mitch´s bike and get to the end together, whatever it took.

We made it, and what an adventure we´d had. Spain is a big place and we´d seen an awful lot of it over the previous twenty four days and we hoped we´d helped the causes too. Now, what shall we do next..?