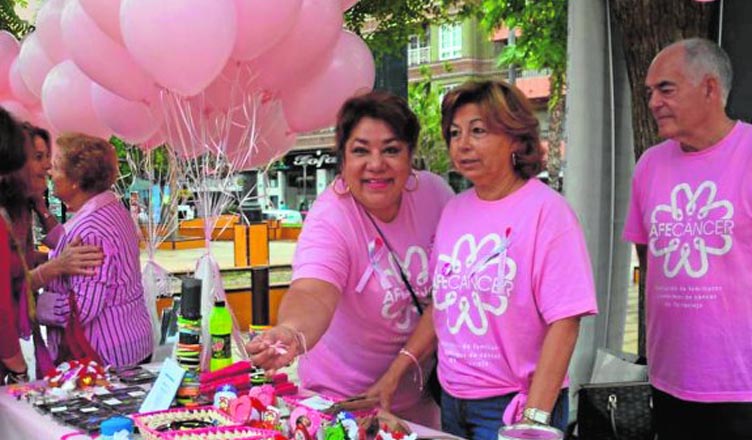 Following on from the magnificent sum raised at La Zenia Boulevard a week or two ago by the Pink Ladies towns and villages across the region joined in the  ‘pink wave’ of support for women with breast cancer on the international day that universally marks the fight against this terrible disease.

A variety of institutions carried out measures such as reading out the names of victims as well as releasing balloons and wearing and selling wristbands and buttonholes all coloured pink.

Together with the local association Afecáncer, Torrevieja’s Quirónsalud Hospital manned an information and awareness table in the Plaza de la Constitution Day that created a large audience during the morning.

The event, attended by a number of Torrevieja councillors as well as Ricardo Brugarolas, the local manager of Afecáncer, read out a statement stating how people still need to be far more aware of the illness.  He then outlined some of the challenges that lie ahead in treatments against the disease and those measures which need to be improved in order to mitigate the effects of chemotherapy and reduce anxiety problems, depression and lack of self-esteem.

There was also a presence by the Quirónsalud Hospital in Algorfa where they highlighted the work done by psycho-oncologists who are working on behalf of Afecáncer through Quirónsalud Hospital. They expressed the commitment of the group which will continue working in support of patients and their families. Also the president of the organization, Luisa Martinez, said a few words of remembrance for those who are suffering from the disease and who struggle each day to overcome this horrible ailment. Meanwhile the Councillor for Social Welfare, Africa Celdrán announced the forthcoming signing of a protocol of cooperation with Afecáncer.

Quirónsalud made available a guide to all attendees that explains how to carry out self-examination. The booklet was distributed free at the information table with the aim of promoting self-examination as a fundamental part of early diagnosis.

The Centre for Public Health in Orihuela also provided an information table in the Centro de Especialidades for all women wanting to receive information about this disease. Information was also provided about breast self-examination techniques, periodic reviews and mammography as primary keys for early diagnosis. Dr. Rosa Maria Navarro outlined the importance of early diagnosis. She said that in 2016 the centre has performed tests on 5,800 women which have yielded 19 positive cases.

On Thursday afternoon in Dolores there was another commemorative eventwas held in front of the Town Hall with the installation of a large pink ribbon and a release of pink balloon.

Image: Information table in the Plaza of the Constitution of Torrevieja